CRISPR Therapeutics' (NASDAQ:CRSP) stock took a hard hit when it disclosed on Oct. 21 that a patient in its Carbon phase 1 clinical trial for relapsed non-Hodgkin's lymphoma died unexpectedly earlier this month. But this unfortunate news doesn't diminish the company's immense potential stemming from its advanced gene-editing technology. Nor will it throw any of CRISPR's clinical trials off track. In fact, with these preliminary results in hand, CRISPR has two powerful things in its favor that investors should know.

First, the company now has clinical proof-of-concept for its leading oncology pipeline program. Though one patient died, others in the trial experienced positive effects from the therapy. Second, its cell therapy manufacturing methodology has been validated in a real-world setting. Both of these developments suggest that the largest takeaway from the trial's preliminary results is that investors should be ready to buy the dip and settle in for the long term. Let's take a closer look at what happened in the trial and what the company aims to do with its development pipeline. 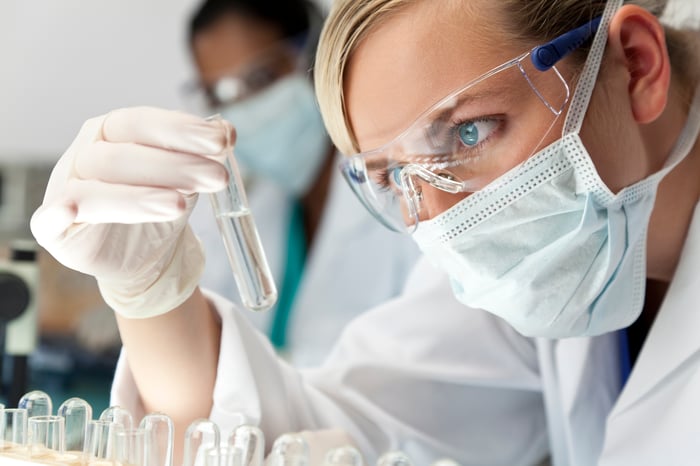 Known as CTX110, CRISPR's cell therapy for non-Hodgkin's lymphoma is the first of the company's wholly owned and internally developed oncology medicines. In the clinical trial for CTX110, 11 patients were treated with different doses of the therapy. As is typical in a phase 1 clinical trial, patients who received the lowest dose didn't respond to treatment, nor did they experience unexpected side effects. Sadly, the one patient who received the highest dose of the therapy died.

According to CRISPR's report, the patient experienced a reactivation of their latent herpesvirus infection, which subsequently caused a fatal case of encephalitis. But for the eight patients who received the second-highest doses, four patients exhibited a complete response to the treatment after three months. One patient even had significant reduction of their detectable cancerous cells. Given that all of these patients had previously relapsed or had treatment-resistant disease, these results are highly promising. However, the death of a patient does raise questions about how risky CTX110 would be in immunocompromised individuals, and it may ultimately impede the therapy's approval.

CRISPR's principal vision is to mass-produce cell therapies that will work in any person. One major obstacle to attaining this goal is that cell therapies are typically manufactured from cells derived from human donors. Once the cells are taken from the donor, they are genetically engineered to become the cell therapy product with the desired effects. Then the cells are infused into the patient. If a donor's cells aren't a perfect match for the intended recipient, the therapeutic cells may attack the patient's cells, and the patient can develop graft versus host disease (GvHD), which can be fatal.

So it simply isn't possible to have healthy donors volunteer their cells to be made into cell therapies for oncology without a new innovation to make it safe for patients. Therefore, many cell therapies require a patient to donate their own cells to be manufactured into the therapeutic product, thereby preventing the risk of GvHD. Importantly, none of the patients in the trial exhibited signs of GvHD, including the patient who died. This means that the company's manufacturing innovation successfully produced a safe cell therapy product using the cells of healthy donors. It's hard to overstate how important this finding is for CRISPR's future.

Manufacturing therapies from a patient's own cells precludes mass-scale manufacturing. Each dose requires an abundance of labor and time to produce. Imagine how long it would take to get a dose of a life-saving medication if you first needed to donate your cells, ship them to a manufacturing facility, wait for them to be altered by manufacturing staff, then wait for them to be mailed back, and finally reinfused into your body in a clinic. Aside from the time involved, the costs would certainly be quite formidable -- but CRISPR's approach is now probably much less cumbersome, and hopefully no less safe.

In short, this preliminary data from CRISPR's CTX110 trial shows that it's possible to mass-produce an effective cell therapy from a diverse group of non-patient donors. This paves the way for the company to develop cell therapies targeting other diseases. It also demonstrates that the company's lofty goal of off-the-shelf cell-based medicines is within reach. The remaining obstacles are less about the viability of CRISPR's core vision, and more about finding cell therapy candidates that are effective for the diseases it wants to address.

For a biotech company, it's rare that such a large and unanswered scientific question finds its answer so early in the course of clinical development. While there's no guarantee CTX110 or any of CRISPR's other pipeline projects will be proven effective in later stages of the clinical trial process, its manufacturing methodology alone is worth millions or perhaps even billions. With this new information in hand, the company's future has become a matter of pushing forward with pipeline development rather than working to manage speculation about the potential of its platform.

I expect CRISPR's stock to recover from its dip, but it may be a while. Further favorable clinical trial data will likely be the catalyst for explosive growth in the short term. In the long term, CRISPR may become a power player in the cell and gene therapy space, and that's something tremendously exciting for investors.