With the market seemingly in correction mode, now is a good time for dividend-seeking investors to update their watch lists for stocks to buy in the sell-off. Given that Caterpillar (NYSE:CAT) is a Dividend Aristocrat (with 27 consecutive years of annual payout hikes so far) and management recently said it anticipates another dividend bump next year, income investors may be looking at the stock. But should they like what they see?

Caterpillar during the pandemic

The COVID-19 pandemic has hit Caterpillar harder than most companies, and its recovery is likely to come quite late in the cycle. The kind of outlays necessary for buying its construction, mining, infrastructure, oil and gas, and industrial machinery are, after all, usually made when customers are feeling comfortable with their end markets. 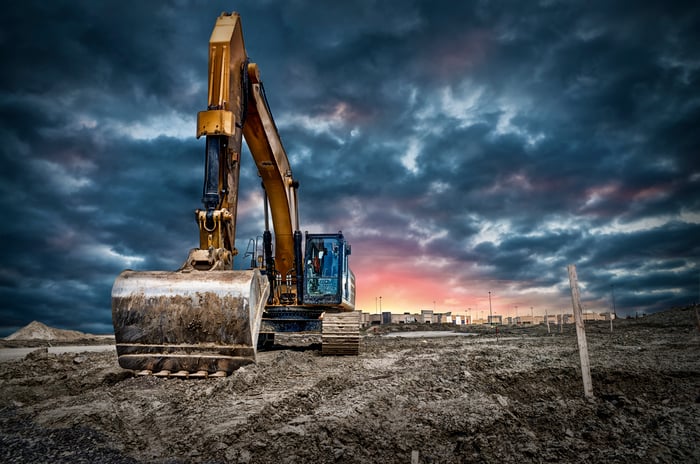 Caterpillar is hoping the market for construction and infrastructure machinery comes back. Image source: Getty Images.

Furthermore, Caterpillar sells much of its equipment through independent dealers. They tend to simply curtail buying from the company during slowdowns, preferring to deplete their inventories. Eventually, those dealers will start to order again, but first, they'll need to get sales and inventory back in alignment. As such, Caterpillar's sales are always cyclical, and there's often a lag between when an economic recovery gets rolling and when its revenues start to really reflect it.

The following charts show the sales growth of Caterpillar's machines from dealers, so where dealers sales lead, the company's sales to them should follow. As you can see, it's been a difficult year. The only bright spot is that total machine sales appear to have bottomed out, but it speaks to just how rough things have been that a 20% year-over-year sales decline can be looked at as an indicator of progress. 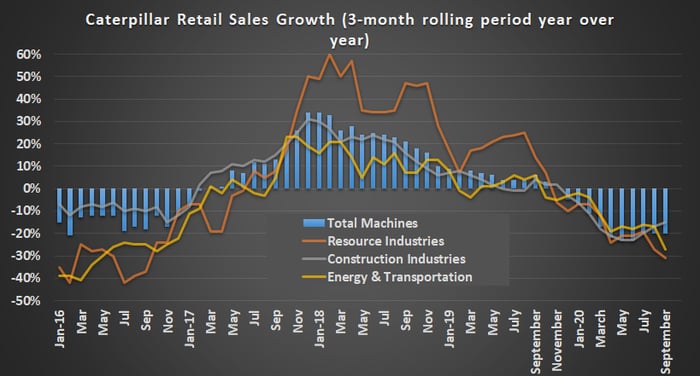 There was yet more bad news on the issue of dealer inventory in the recent third-quarter earnings report. Speaking on the earnings call, CEO Jim Umpleby said that "dealers decreased inventory by $600 million this quarter versus a decrease of $400 million in the third quarter of 2019. That was more of a decrease than we anticipated." He went on to say that "With dealers having reduced their inventories by $1.8 billion year-to-date, we now estimate they will reduce their inventories by about $2.5 billion by year-end."

Those dealer inventory reductions were a headwind that drove Caterpillar's sales down by 23% year over year in Q3, and 25% in the first nine months of the year. Moreover, Umpleby's commentary suggests Q4 will be another difficult one.

The company's dividend of $4.12 per share -- which currently yields 2.7% -- will cost it around $2.3 billion, and the question most income investors will be asking is: How sustainable is Caterpillar's dividend?

Given that management has committed to return all of its machinery, energy, and transportation free cash flow (FCF) to shareholders "through the cycle," one good way to start answering that question would be to compare Caterpillar's FCF with its dividend payout and see how well covered it is.

Going back to the 2019 investor day presentation, management forecast that its FCF would range between $4 billion and $8 billion through the business cycle. However, that was then and this is now. Caterpillar's FCF has already dipped below the low end of that range.

For the first three quarters of 2020, Caterpillar's FCF was $1.4 billion;  given that FCF was around $1.9 billion in Q4 2019, that's a 12-month trailing FCF of around $3.3 billion. But that's more than enough to cover a $2.3 billion dividend payout, so investors need not worry about that in the near term.

However, given the anticipated sales decline in the current quarter, the company is clearly not going to repeat its 2019 FCF performance in 2020. Obviously, Caterpillar needs to get back to revenue and earnings growth in order to start growing FCF again.

On that score, CFO Andrew Bonfield said he expected "to see less of a decline in end-user demand in the fourth quarter compared with the third" and, given the substantive dealer inventory reductions in 2020, he said that dealers could be in a position to pick up ordering in 2021. Furthermore, Umpleby said that he felt "constructive on what we see in mining," and Caterpillar is tendering for some large projects in the industry.

All of which plays to the narrative of Caterpillar's sales hitting a trough in 2020, meaning that they can grow significantly in the years to come. Indeed, investors have been willing to support the stock -- it's actually up 6.3% in 2020 -- on the idea of a sales recovery to come. Moreover, Caterpillar is seen as a leading beneficiary of an infrastructural spending bill.

What it means to income investors

All told, Caterpillar's dividend is safe in the near term, and it deserves a look for investors looking for stocks they can buy on the dip that will let them lock in a solid yield. After all, history suggests that the company's sales will turn upward eventually. Just be prepared for some near-term risk.

That said, its sales continue to deteriorate, and it remains a highly cyclical company. Any fresh signs of deteriorating economic conditions could lead to construction, mining, and infrastructure projects being delayed or canceled. As such, if you are worried that the global economy could slump again in 2021 as a result of the COVID-19 pandemic, then Caterpillar is not a stock for you.

Otherwise, Caterpillar remains a useful option for income-seeking investors willing to ride out the volatility of the economic cycle.