In a difficult environment for retailers, Kohl's (NYSE:KSS) shares were marching higher last month as the company launched a new athleisure brand, unveiled a partnership with Cole Haan, and released a strategic plan to expand its operating margin to 7% to 8%.

That news pushed the stock up 15% in October according to data from S&P Global Market Intelligence, and as you can see from the chart below, the surge came in the third week of the month as the company announced those updates in a two-day span. 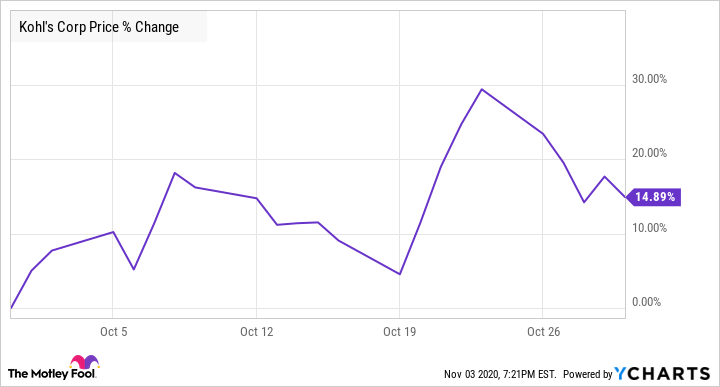 There was little news out on Kohl's last month until Oct. 19, when the company said it would partner with footwear brand Cole Haan, which will be in 200 stores by the spring of 2021 and include an expanded assortment on Kohls.com. 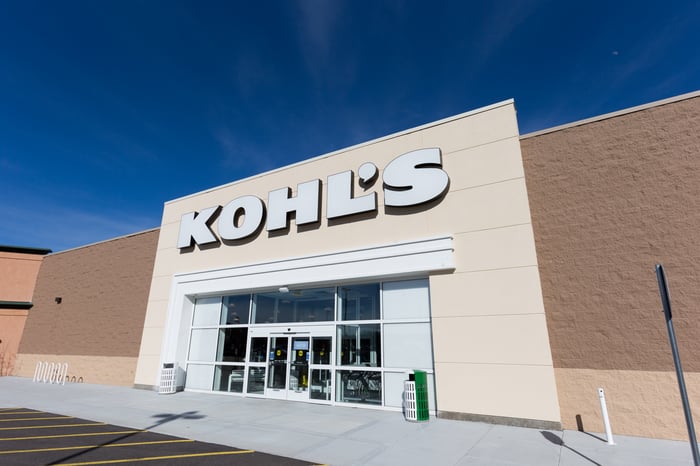 The following day the stock started rallying the after it announced a new private label athleisure brand, FLX, which will launch online and in stores next March. Athleisure has been one of the few categories of apparel that has done well during the pandemic as stocks like Nike and Lululemon have outperformed, and launching its own label will generate higher margins for Kohl's than selling brand names, a strategy that has worked well for Target as well.

At an investor conference that day, Kohl's also announced a new strategic vision "to be the most trusted retailer of choice for the active and casual lifestyle," and said it aimed to expand its operating margins through cost savings and efficiencies in its supply chain, management structure, and elsewhere.

The stock rose 6.6% on Oct. 20 and climbed 23.7% over a four-day span starting that day, showing investors were clearly hungry for some good news from the stock.

With coronavirus cases rising again across the country, the holiday season may be a difficult one for the retail stock . Analysts expect a strong shift in holiday sales to the online channel, exacerbating the challenges already facing the department store chain as sales have been down sharply since the pandemic began.

We'll get an update from Kohl's later this month when it reports third quarter earnings. Analysts expect revenue to decline 9.4% to $3.85 billion and see a loss of $0.47 per share, compared to a profit of $0.74 per share in the quarter a year ago.