Moderna (NASDAQ:MRNA) just might win FDA emergency use authorization for its COVID-19 vaccine candidate mRNA-1273 by the end of the year. Only one other coronavirus vaccine even has a chance of doing so. If mRNA-1273 is successful, Moderna stands to receive billions of dollars thanks to multiple supply deals that the company has lined up.

Meanwhile, Novavax (NASDAQ:NVAX) has yet to begin its anticipated U.S. late-stage study of its COVID-19 vaccine candidate. But if you're thinking that this puts Moderna and Novavax in completely different leagues, think again. Actually, there are three big advantages that Novavax has over Moderna. 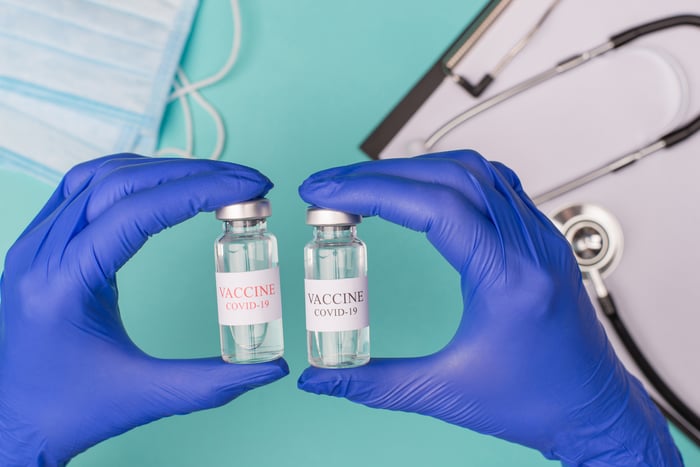 Neither Moderna nor Novavax can sell vaccine doses that they don't have. At this point, Novavax appears to have an edge in terms of production capacity for its COVID-19 vaccine compared to Moderna.

Moderna expects to be able to produce around 20 million doses of mRNA-1273 by the end of this year. The biotech anticipates that its international manufacturing network will enable it to produce up to 1 billion doses of the vaccine in 2021.

However, Novavax could more than double Moderna's output. In September, Novavax expanded its manufacturing agreement with Serum Institute of India Private Limited to produce around 1 billion doses of COVID-19 vaccine NVX-Cov2373 in 2021. The biotech thinks that it will be able to make over 2 billion doses of the vaccine per year when all of its planned capacity is brought online by the middle of next year.

2. Another product on the way to approval

Sure, Moderna's COVID-19 vaccine will probably reach the market before Novavax's NVX-Cov2373 will. But Novavax might not be too far behind. And it could be quicker to get a second product to market than Moderna will.

Novavax reported overwhelmingly positive results earlier this year from a late-stage study of flu vaccine candidate NanoFlu. The company's primary hurdle to jump before it can file for FDA approval is to complete a required lot consistency trial.

What about Moderna? The biotech currently doesn't have any other pipeline candidates in late-stage testing beyond mRNA-1273. Moderna does plan to advance its cytomegalovirus (CMV) vaccine candidate mRNA-1647 to a pivotal phase 3 study next year. However, Moderna seems much less likely to have a second product on the market before Novavax will.

Both of these biotech stocks have been big winners so far this year. Moderna's shares have soared nearly 250%, while Novavax stock has skyrocketed close to 2,000%. Even with its fantastic performance, though, Novavax's market cap stands at only a little over $5 billion. That's less than one-fifth the size of Moderna's market cap.

Why does this matter? Much of the potential success for mRNA-1273 has already been baked into the share price for Moderna. On the other hand, Novavax's market cap doesn't come close to reflecting the potential that NVX-CoV2373 and NanoFlu could have if both vaccines win regulatory approvals.

Despite these three advantages that Novavax has over Moderna, there is still one key area where Moderna is on top other than its head start for mRNA-1273: the depth of its pipeline.

Aside from NVX-CoV2373 and NanoFlu, Novavax has two other clinical-stage pipeline candidates -- experimental respiratory syncytial virus (RSV) vaccine ResVax and an experimental Ebola virus vaccine. ResVax has already flopped in a couple of late-stage studies. Novavax's Ebola vaccine candidate is only in early stage testing.

Moderna's pipeline, on the other hand, features four phase 2 programs. As already mentioned, one of those candidates (CMV vaccine mRNA-1647) is expected to advance into a late-stage study next year. Two of the other phase 2 programs have big partners -- AstraZeneca and Merck. In addition, Moderna has eight other programs in phase 1 testing.

Moderna has long believed that if its messenger RNA (mRNA) approach works for one disease, it should be able to work for many other diseases. This potential for an mRNA platform remains a big plus for the biotech.