Even during COVID-19, silver linings from the pandemic have appeared. One of these is the success of e-commerce stocks. As shoppers clamored for safe shopping options, e-commerce companies and their contactless buying options became a draw.

However, in an industry where Amazon or Walmart gain much of the attention, many other retail companies have become forces in the e-commerce industry in their own right. Best of all, it is not too late to buy some of these stocks at a relatively early stage. Those wanting to find such opportunities in the e-commerce industry should consider stocks such as BJ's Wholesale (NYSE:BJ), eBay (NASDAQ:EBAY), and StoneCo (NASDAQ:STNE).

BJ's is a warehouse retailer operating on the U.S. East Coast. It has never developed the extensive footprint that Costco or Walmart's Sam's Club have built. Nonetheless, it has expanded in its region and boosted its e-commerce presence by going into omnichannel retailing.

Due to COVID-19, this retailer that had long treaded water finally gained some traction. In the most recent quarter, revenue surged by 24%, while net income rose by almost 97% year over year. This included an increase of more than 300% in digital sales over the same period.

The higher income gave the company as much quarterly free cash flow as it usually sees in a year. It also allowed the company to pay off $500 million in debt and add $170 million in cash to the balance sheet. 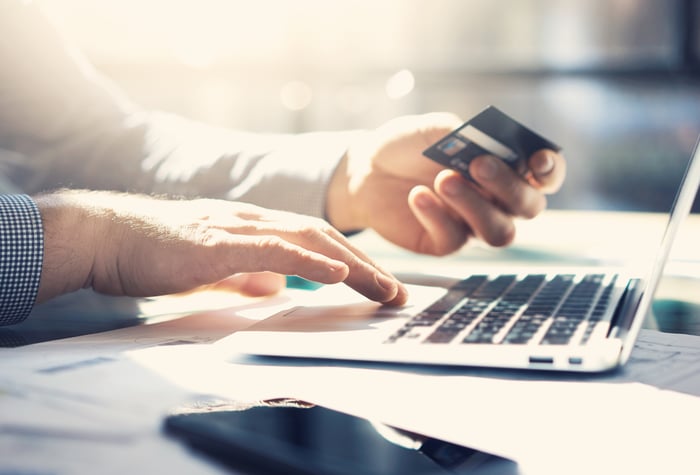 Although part of the cash came in the form of government stimulus, the company plans to invest it in its expansion. This should foster a virtuous cycle of new stores and larger sales growth, particularly with e-commerce generating a greater proportion of sales.

At a forward price-to-earnings (P/E) ratio of about 15, BJ's stock trades at a discount to its peers. If the cash infusion brings about the permanent increase in growth management seeks, it could begin a secular bull market in BJ's stock as its footprint moves westward.

Most people know eBay for pioneering online auctions in the early days of the internet. However, over the years, Amazon has dramatically eclipsed it in terms of performance. PayPal, its former subsidiary, has grown to more than six times eBay's market cap.

However, eBay may soon begin to gain traction. Former executive Jamie Iannone returned to the company to become its CEO in April. Iannone served in various e-commerce-related roles at Walmart. He helped to revive sales, partially through online channels. Today, many regard Walmart as one of the top e-commerce companies.

Now, it looks like he may help bring similar success to eBay. In the most recent quarter, revenue increased by 25% from year-ago levels. This led to a 64% rise in diluted earnings per share over the same period. It is also quite a contrast from the much slower revenue growth and inconsistent profitability eBay experienced before Iannone became CEO.

eBay stock surged following the March lows. However, its forward P/E ratio stands at only about 13, near its long-term averages. Nonetheless, analysts project profit increases of 48% this year and 9% in 2021. Assuming Iannone can maintain double-digit profit growth long-term, the earnings multiple will likely not stay at current levels for long.

StoneCo is a Brazilian fintech company that helps make e-commerce possible for Brazil's population. An investment in its IPO by Warren Buffett's Berkshire Hathaway has also attracted attention.

Though it may look like just another fintech company, investors should understand that it holds an advantage over the likes of PayPal or Visa in Brazil. Like most of Latin America, Brazil is a cash-based society where a large portion of the population does not hold a bank account. StoneCo develops solutions to help e-commerce businesses serve these customers.

At a forward P/E ratio of approximately 55, it may not look like a cheap stock. However, the company's growth numbers may make the stock worth the expense. In the most recent quarter, revenue increased by 39% from the same quarter last year. This helped to take adjusted earnings per share higher by 38% over the same period.

Due to the pandemic, analysts forecast profits to fall by just under 6% this year. However, they also expect earnings to bounce back in 2021 with a growth rate estimated at 84%.

Moreover, StoneCo only serves Brazil for now. Should it decide to venture into other Latin American companies that have similar challenges with electronic payments, it could maintain this growth rate for years to come. Given this potential, one can see why Buffett's team took such an interest in this stock.