Intuitive Surgical (NASDAQ:ISRG) is known for two things: its da Vinci robotic surgical suite, and being a powerhouse growth stock. Over the past 10 years, Intuitive Surgical's stock price has grown by upwards of 660%, with most of that happening after 2016. And thanks to rising global adoption of its high-tech approach to minimally invasive surgery, the company's wild growth could accelerate. This is definitely a stock for investors of all stripes to pay close attention to.

In my opinion, Intuitive has a real chance of tripling in value by 2030. To reach those levels, the stock would need to reach a price of about $2,000. I think this is realistic because the company's revenue largely comes from recurring sources and because high switching costs make it difficult for smaller competitors to steal its market share. Let's take a closer look at Intuitive's growth and its competitive positioning to see how realistic it might be for the stock to hit around $2,000 over the next nine years or so. 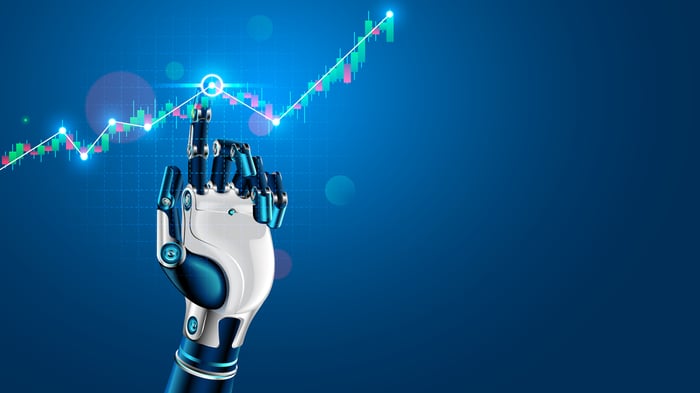 Intuitive has made consistent progress in placing its robots into operating rooms everywhere. Its base of installed systems expanded by 12% from 2018 to 2019, and the rate of new system installation also increased. In other words, the number of da Vinci units available to perform surgeries is increasing, as is the rate at which they are leased or sold and subsequently shipped and installed. At the same time, Intuitive is expanding the number of procedures that can be performed with its da Vinci robots by developing new surgical tools. In 2019, Intuitive got the green light from regulators to start selling a total of seven new tools, including a lung biopsy system, a wound stapler attachment, and an augmented reality imaging system.

Thanks to a growing base of installed units and an expanding array of eligible surgical procedures, Intuitive's robotic surgery suites are being used to perform more and more surgical procedures each year. In 2019, da Vinci units were used in 18% more surgeries than in the prior year, about 1.2 million procedures in total. A significant amount of this growth occurred in the number of units used in general surgeries, which has the company's fastest-growing segment since 2011. In total, revenue from leases of da Vinci units increased by 108% year over year in 2019, and it nearly doubled in the prior year as well.

Seventy-two percent of da Vinci's revenue is derived from recurring sources, like maintenance contracts, disposable instruments, and surgical accessories. This means that each newly installed robotic surgical unit will grow the company's base of recurring revenue, which is a positive sign for its long-term revenue growth. Last year, revenue from instruments and accessories increased by 23% year over year, and 2018 saw a similar increase. Maintenance service revenue also expanded by 14% in 2019. As long as hospitals are using da Vinci robots, they'll need to keep spending in these categories.

How Intuitive's growth could sputter out

Intuitive is profitable, and it has zero debt. Nonetheless, the pandemic has hit the company quite hard. Intuitive shipped 29% fewer surgical units in the third quarter of this year compared to the prior year, and revenue dropped by 4%. As patients put off nonessential surgical care, the number of procedures performed with da Vinci units also collapsed, as did expenditures on accessories. If the pandemic drags on for several years, the economic fallout to Intuitive could slow its growth to a crawl.

While there aren't any major competitive threats on the horizon right now, it's possible that a competitor could emerge in the next decade. Especially if competing surgical suites can perform the same types of procedures, Intuitive may need to fight harder to keep expanding its customer base.

There is one other issue that may provide a competitor with a decisive advantage: effectiveness. In the past, Intuitive has faced criticism that its robotic surgeries are not necessarily any better for patients than traditional methods. Should this criticism calcify into a consensus that the da Vinci system isn't an upgrade over these methods (or a competitor's), Intuitive would be substantially worse off. 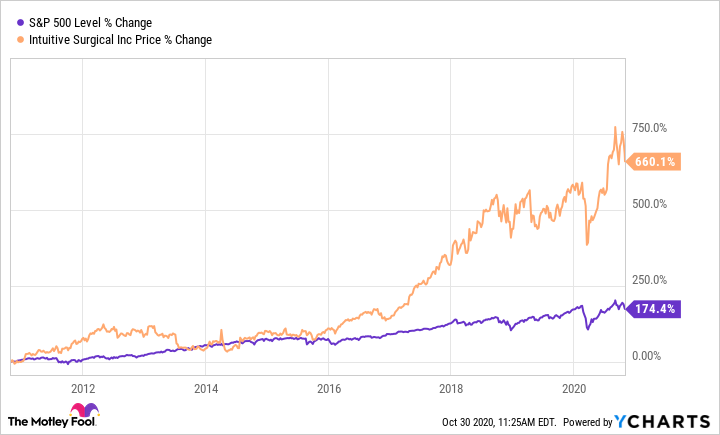 I'm bullish on Intuitive Surgical. The company has consistently expanded at an aggressive pace while adding innovations to its core platform. Once hospitals and clinics have a lease on a da Vinci system, they need to invest in training their surgeons to use it, so they're unlikely to switch to a different product. Likewise, the company still has plenty of room to expand into international markets in Asia and Europe.

These factors mean that Intuitive can probably keep growing moving forward, even if the pandemic throws a wrench into its plans for a few quarters. Thus, it's entirely plausible for the stock to triple by 2030, and investors should act accordingly.