Meal kit maker Blue Apron (NYSE:APRN) has struggled to remain relevant since its IPO three years ago. Its growth decelerated, it remained deeply unprofitable, and it faced a growing number of competitors. As a result, its stock eventually dropped below $1 a share -- and only dodged a potential delisting with a 1-for-15 reverse stock split last year.

After adjusting for that reverse split, Blue Apron's stock has declined nearly 97% from its IPO price of $10. Many investors have likely given up by this point, but Blue Apron's revenue actually rose year-over-year over the past two quarters, and its stock trades at just 0.2 times this year's sales. 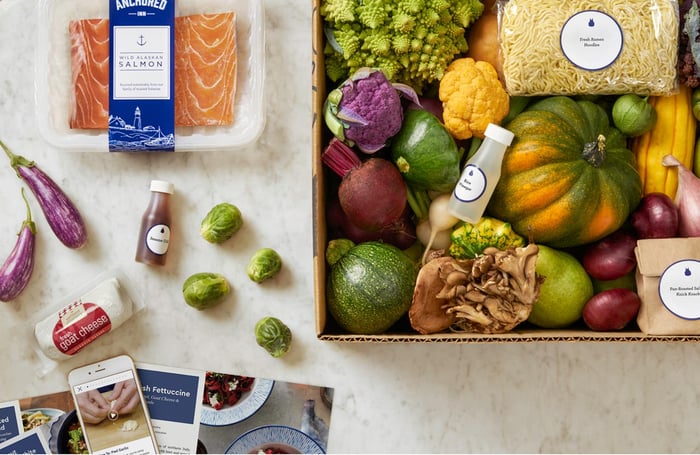 Could Blue Apron actually be a deep value stock that could generate multibagger returns over the following year? Let's dig deeper to find out.

Instead of trying to win back customers -- many of whom were lost to competing meal kits, pre-cooked meals, or delivery and takeout options -- Kozlowski attempted to stabilize Blue Apron's business and boost its orders and revenue per existing customer to right-size the company. That strategic shift was painful, but its revenue finally rose again in the second and third quarters of 2020 as its customer losses decelerated:

Kozlowski's focus on retaining higher-value customers gradually paid off, and the COVID-19 pandemic amplified that growth as more people stayed at home and purchased meal kits instead of regular groceries. As a result, Blue Apron's average orders per customer and order value rose significantly in the second and third quarters:

The company expects that momentum to continue with 15%-19% year-over-year revenue growth in the fourth quarter. That forecast points to a revenue decline of less than 1% for the full year, compared to a 32% decline in 2019 and a 24% decline in 2018.

Under Kozlowski, Blue Apron reduced its marketing spending to focus on retaining its higher-value customers with new products. That strategic shift, along with operational improvements at its fulfillment centers, enabled the company to gradually narrow its adjusted EBITDA and net losses over the past year:

Blue Apron gradually ramped up its marketing spending in the second and third quarters to capture the stay-at-home market during the pandemic, but it still narrowed its losses from the prior year as its revenue growth accelerated.

For the fourth quarter, it expects to incur a net loss of less than $15 million, and an adjusted EBITDA loss of less than $5 million -- even as it spends more cash on fresh marketing campaigns. Blue Apron will remain unprofitable for the full year, but its losses should narrow significantly from 2019.

But still a lot of unanswered questions

Blue Apron looks healthier than it did a year ago, but its growth could decelerate again after the pandemic passes. It's also still growing at a much slower rate than top rival HelloFresh.

During the third quarter, HelloFresh's active customers surged 92% year-over-year, its total orders soared 114% to 19.5 million, and its average orders per customer grew 12%. It also expects its revenue to double for the full year. In addition, Blue Apron still faces tough competition from smaller rivals like Kroger's HomeChef and Albertson's Plated.

Blue Apron recently refinanced its debt and issued a new stock offering to raise more cash. Those moves weren't surprising, but they highlighted its weak balance sheet and weighed down its stock. The recent conclusion of its strategic review without any major decisions also likely disappointed some investors who expected a sale.

So where will Blue Apron be in a year?

A year ago, I considered Blue Apron a doomed investment. The stock was cut in half over the past 12 months, but Kozlowski's aggressive turnaround measures are now breathing life back into this battered company. If Blue Apron continues to stabilize its business with narrower losses, I believe the stock could shake off the short sellers and head higher over the coming year.