While the winner of the U.S. presidential election has yet to be determined, the stock market isn't letting a little uncertainty derail its rally. The Dow Jones Industrial Average (DJINDICES:^DJI) was up 2.1% at 11:10 a.m. EST Thursday.

The Dow is rallying against a backdrop of a rapidly worsening pandemic. The U.S. reported more than 100,000 cases of COVID-19 for Wednesday, according to Johns Hopkins University, the highest level yet. The fragile economic recovery could be put in peril by new measures meant to slow the spread of the virus.

Surging along with the Dow on Thursday were Apple (NASDAQ:AAPL) and Verizon (NYSE:VZ). Apple stock was up despite a report that the tech giant is facing a shortage of key iPhone chips, while Verizon stock jumped after an analyst upgraded the stock. 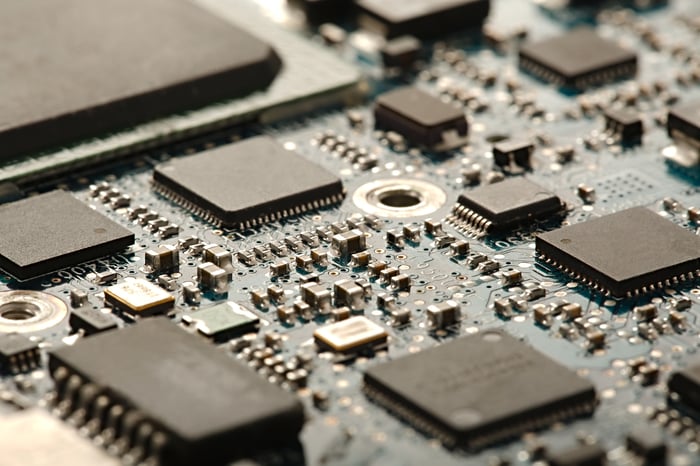 A combination of supply chain disruptions from the COVID-19 pandemic and stockpiling behavior from some companies worried about running out of components has created a tight supply situation. Bloomberg's sources expect the disruptions to continue for the next two quarters.

It's unclear whether this chip shortage will impact the iPhone 12 launch or next year's expected launch of the first Macs powered by Apple's custom chips. Apple CEO Tim Cook mentioned in the company's most recent earnings call that supply constraints were impacting several product categories, but he didn't go into further detail. Bloomberg's sources did say that Apple's suppliers are likely to prioritize the tech giant, so the company may not have any significant issues with its upcoming product launches.

Sales of Apple's iPhones plunged 21% in Apple's fiscal fourth quarter, and total sales in China dropped 29%. The delayed launch of the iPhone 12 family into Apple's fiscal first quarter was partly to blame as users waited to upgrade to the new phones. Also likely to blame for the weak sales in the U.S. was a lack of additional economic stimulus.

How strong demand will be for Apple's pricey new phones as a winter wave of the pandemic threatens the economic recovery remains to be seen. Shares of Apple were up 2.7% by late Thursday afternoon, shaking off the chip shortage report.

Shares of wireless carrier Verizon jumped on Thursday thanks partly to some positive analyst commentary. Analysts at J.P. Morgan upgraded Verizon stock to overweight on the assumption that the company's growth rate will increase. The bank also boosted its price target on the stock from $61 to $65.

J.P. Morgan expects growth in Verizon's wireless service revenue to accelerate. On top of that acceleration in the core business, the bank sees fiber and fixed broadband presenting some additional revenue opportunities.

Verizon managed just 0.3% year-over-year growth in wireless service revenue in the third quarter. Lower customer activity was part of the problem, as was "the timing of certain device launches." The most notable device that launched late this year was Apple's iPhone 12 family. While Apple typically announces new iPhones in September, this year's launch was pushed back a few weeks due to pandemic-driven supply chain issues.

If the iPhone 12 does trigger an exceptional year for iPhone upgrades, that could help Verizon's wireless business in the fourth quarter. However, surging cases of COVID-19 in the U.S. could put a damper on customer upgrade activity.

Shares of Verizon were up about 2.9% by late Thursday morning.