Aurora Cannabis (NASDAQ:ACB) is easy to see as a particularly risky cannabis company, especially since its stock price effectively collapsed this year, dropping nearly 80% since Jan. 1. Between the pandemic's effect on retail revenue and an uncertain future for the legalization of cannabis in North America and elsewhere, Aurora Cannabis is not the lone pot stock experiencing immense disruption. If investors want to protect their marijuana stock portfolios, they'll need to understand the plethora of risks facing companies like Aurora.

In short, Aurora's stock could easily see a burst of growth if cannabis is federally legalized in the U.S. or the E.U., but that won't solve the company's larger issues with profitability. Nor will it guarantee that the company captures a significant share of the newly created markets. In fact, new developments in both of these areas have recently changed the riskiness of the stock. 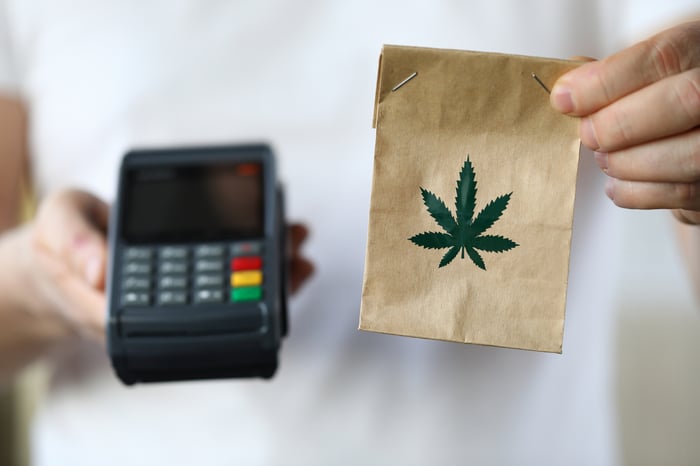 Aurora has plenty of internal and external factors driving risk

The first thing that potential investors should know about Aurora is that it isn't profitable. While the company is taking aggressive actions to reduce its heavily overbuilt cannabis cultivation capabilities, only closing a few cultivation centers may not be enough to bridge the gap between its sales and its expenses. So, while the risk of it being unprofitable in the long term may be dropping, there's still a substantial risk in the short term that profitability will be slower to arrive than investors want.

There's also a substantial risk that Aurora's market share is slipping. According to the company's latest earnings report, it has lost its number one position in the consumer use segment of Canada, which is its largest market. Furthermore, consumer cannabis revenue (for the period ended June 30) shrank by 9% compared to the prior quarter, driven by a 30% fall in the average price per gram of cannabis sold. This last point is especially bad news, because it means that the company's narrow-margin and low value-added products like bulk cannabis flower are selling better than more profitable items like vaporizer canisters. A slipping market share in Canada doesn't portend well for the company's ability to penetrate and retain dominance in new markets enabled by cannabis legalization, which may be looming in the U.S.

Risk is falling in several key areas, but slowly

Aurora's ambitious plan to scale back its operations to focus on its core profitable products has been in full swing for several quarters now. Some of the plan's beneficial effects are already appearing in the company's financial metrics. Selling, general, and administrative (SG&A) expenses fell by 18% in the most recent quarter, which is something that the company's leadership has mentioned as a priority. Likewise, Aurora's cannabis production volume is rising, which is allowing it to take advantage of economies of scale. This reduced the cash cost to produce a gram of cannabis by 27% compared to the prior quarter.

New cost reductions are slated to begin next year. By the middle of 2021, Aurora expects to have positive earnings. So, if everything goes according to plan, Aurora might start to have upward pressure on its stock from positive earnings growth by the end of next year or in early 2022.

What's the verdict on Aurora's risk?

The final piece of the puzzle is that Aurora is facing a shareholder lawsuit alleging that its transformation plan failed to mitigate the company's profitability issues, among other claims. In other words, the company's investors haven't been satisfied with the actions that it has taken so far to reduce its downside risks. And, as a result, the company may be on the hook to compensate its shareholders, losing more money in the process.

I think that Aurora Cannabis is still a highly risky stock. But its overall level of risk appears to be dropping thanks to the company's transformation plan, even if it has proceeded a bit more slowly than we would have hoped. If you're still interested in investing in Aurora, check back in the middle of next year to see if it has reached the positive earnings its management aspires to, and be sure to tread carefully -- even then. For investors with a very high tolerance for risk, investing now might result in the largest gains, but it's a gamble at best.