Shares of JFrog (NASDAQ:FROG) slipped 14.4% in October, according to data from S&P Global Market Intelligence. The stock fell amid mixed coverage from analysts and sell-offs for growth-dependent tech stocks at the end of the month. 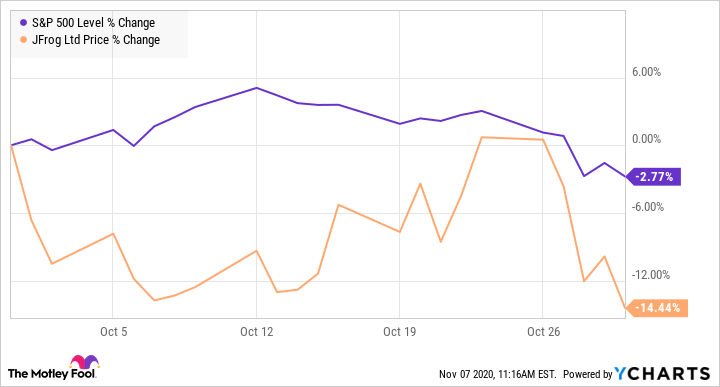 JFrog had its initial public offering in mid-September, and its share price is still up more than 46% from its debut price of $44 per share. However, the SaaS stock has also given up any gains since market close on the day of its IPO. 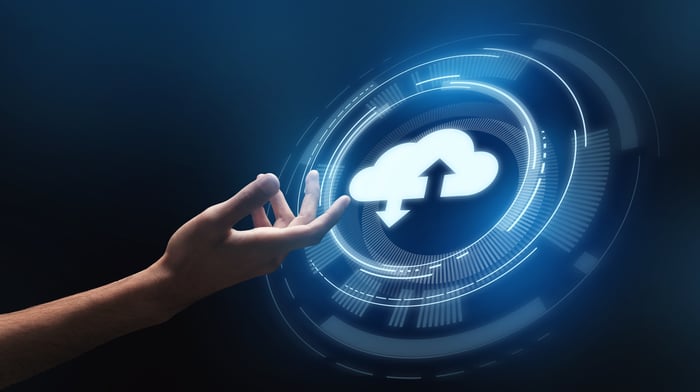 Nine major investment firms initiated coverage of JFrog on Oct. 12, and the stock received the equivalent of buy ratings from four of four of the firms. J.P. Morgan analyst Sterling Auty published a note giving the company an "overweight" rating and issuing a one-year price target of $90 per share.

While there was plenty of bullish sentiment, JFrog didn't win unanimous praise in the sudden batch of analyst coverage, and the stock also received five neutral ratings. Morgan Stanley's was notably nonplussed, giving the stock an "equal weight" rating and a Wall Street low price target of $67 per share.

Shares trended lower following the coverage initiations, and then saw a pronounced sell-off in conjunction with the broader market's dip at the end of the month.

JFrog stock has continued to slide following the company's third quarter earnings release on Nov. 4. Shares are down roughly 8.6% in the month so far. 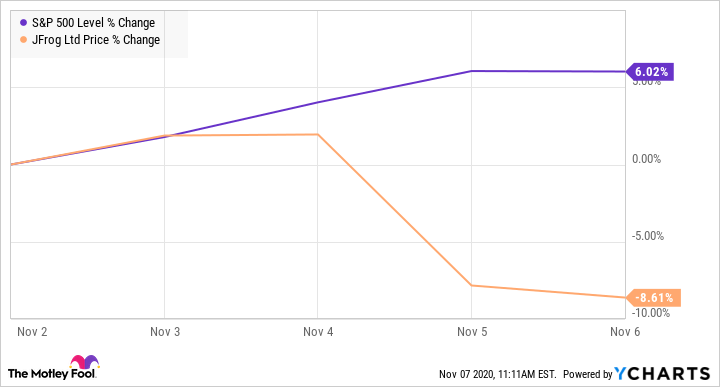 JFrog's sales climbed 40% year over year in the third quarter to reach $38.9 million, and the company posted non-GAAP (adjusted) earnings per share of $0.05. The average analyst estimate had targeted a breakeven quarter on sales of $37.8 million.

JFrog is guiding for fourth quarter revenue to be between $40.9 million and $41.9 million, and it expects earnings to come in between breakeven and $0.02 per share. This forecast also came in ahead of the average analyst estimate, which had called for a breakeven quarter on sales of $40.5 million. Despite the earnings and guidance beats, some analysts remained bearish on the company's outlook, and unfavorable ratings may have played a role in the post-earnings sell-off.

JFrog is now valued at roughly $5.9 billion and trades at approximately 64 times this year's expected sales.