I'll bet F-16 fighter jets are the first thing to come to mind. Lockheed makes them, and they're still the most popular fighter jet model in the world. F-35 stealth fighters also probably top your list. The 21st Century successor to the 20th Century F-16, hardly a month goes by without a new F-35 sales contract being announced somewhere in the world.

But do you think any higher than airplanes fly? Do you think about space? Because Lockheed Martin has been thinking a lot about space lately -- and if investors really want to understand this stock, they need to start thinking about space, too. 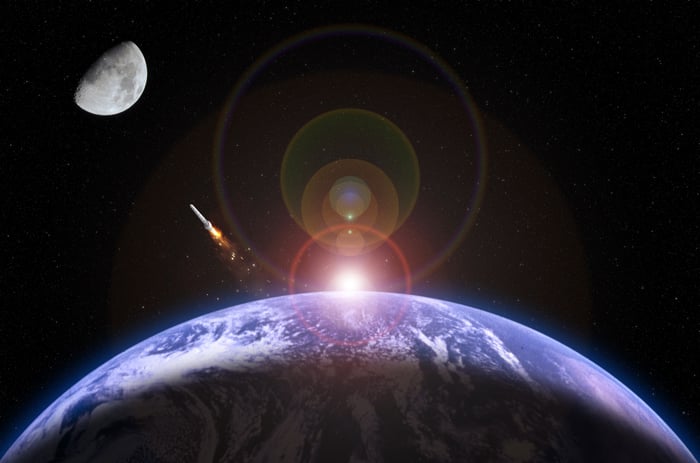 You can see this in Lockheed Martin's Q3 2020 earnings report, which was released last week. In that report, and on the earnings conference call that followed it, "space" as a business segment got mentioned no fewer than 47 separate times, both by Lockheed management and by the analysts who follow the company.

Out of Lockheed Martin's four main business divisions, "space" grew the slowest in Q3 2020 (with revenue rising just 6%), and space was the only one of those four divisions to show a decline in operating profit -- down 20% year-over-year as operating profit margins plummeted 280 basis points.

Obviously, that is not great news. Competition from SpaceX is clearly eating into both the business revenue and the profit margins of Lockheed Martin's crucial United Launch Alliance joint venture with Boeing (NYSE:BA). And yet Lockheed Chief Financial Officer Kenneth Possenriede has high hopes that "space" is going to be Lockheed's "highest growth business area" going forward.

Where Lockheed is growing

Looking ahead through the end of the year and into 2021, Possenriede predicts that "strategic missile defense" revenue is going "to be up double-digit." Other space projects, "SBIRS, Advanced EHF and GPS" among them, will see revenue decline in the "mid single-digits due to program lifecycle."

And that averages out to "mid single-digit range" revenue growth in space.

At the same time, Lockheed is looking for explosive growth in "classified" space work for the Pentagon. "The classified space arena is really a wide-open field," says Lockheed Martin CEO James Taiclet. "Our Space business is again the clear leader in this area and we're putting out some really fantastic products I think that are unmatched in our industry." Additionally, Taiclet sees growth opportunities in building out a "5G.mil architecture" in orbital satellites. The CEO highlighted Lockheed's recent receipt of a "space transport layer" missile defense contract worth "$200 million to develop initial data transport capabilities for the first generation of the National Defense Space Architecture," and predicts Lockheed will demo this new satellite system "in just two years."

All that being said, and the expected revenue growth notwithstanding, Possenriede cautioned investors to expect "a little bit of a erosion in margins in 2021" for the space business.

The threat from SpaceX

And then there's still the SpaceX factor to consider. SpaceX, alongside L3Harris last month, won the much larger piece of that missile defense contract -- $342.7 million to build the spy satellites that will send data through Lockheed's "space transport layer."

Competition from SpaceX came to the fore with questions posed on the conference call by Seaport Global Securities analyst Richard Safran, who asked whether "there was an issue [with] ULA" that was depressing profit margins, and specifically whether "competitive dynamics in the Space business [from] SpaceX represent a challenge to" Lockheed.

Possenriede responded by admitting that, yes, in recent years, SpaceX has evolved from "an emerging threat" into something "more than an emerging threat." And yet, he argued that on rocket launches at least, Lockheed and Boeing "now have a price point that is compelling to customers that will allow ULA to get its fair share of awards over SpaceX." And he cited "recent competitions" -- in particular, the Space Force contracts awarded in August -- as evidence that ULA is price-competitive with SpaceX.

Indeed, those August contracts -- dubbed "Phase 2 Procurement" -- secure a place for ULA in space launch through at least 2027, and should generate about $3.3 billion to be split between ULA co-owners Boeing and Lockheed over six years.

Meanwhile, Lockheed is moving to address SpaceX's incursion into its satellite business by building a $350 million, 266,000-square-foot "Gateway Center" to "build a spectrum of satellites from micro to macro that communicate with front-line troops, explore other planets, and support unique missions" -- and to build them "faster, smarter and more affordable for our customers."

We'll have to wait to see it in operation to learn just how much the new satellite factory will help Lockheed's space business. All I can say at this point is that the improvement will have to be dramatic to even match SpaceX's achievement -- it's produced, launched, and orbited more than 800 Starlink satellites in just the last 18 months.