Literally hundreds of shiny new fighter jets will take flight over the next decade.

Lockheed Martin's (LMT 2.59%) F-35 stealth fighter gets all the headlines, but around the world, Lockheed's F-16 Falcon remains the world's most popular fighter jet. Thanks to a new arms deal struck with Taiwan, the F-16 could reign supreme for decades to come.

As confirmed by an update on the Pentagon's daily digest of contract awards, last week, the Air Force awarded Lockheed Martin a $62 billion contract to produce an unspecified number of F-16 fighter jets for purchase by foreign allies. But who will be buying these airplanes, and is this deal as profitable for Lockheed Martin as it sounds? 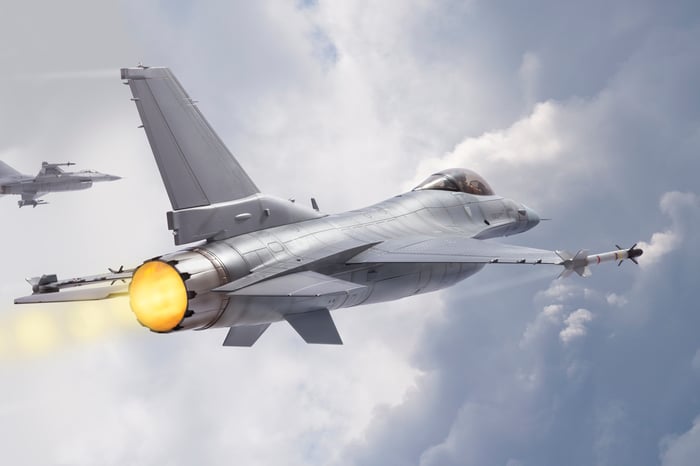 Look who's buying the F-16 now

Seriously. Who is buying all these fighter jets?

Curiously, the DoD announcement of the sale doesn't specify the buyer(s). But according to a story by Agence France-Presse, at least 66 of the fighters on order (out of an initial production lot of 90) will be going to Taiwan in an $8 billion arms deal first revealed last year.

The destination of the other 24 jets remains a mystery. (Some sources surmise it will be Morocco). And when you consider the vast size of this deal -- nearly eight times the dollar value of the sale negotiated last year -- and its long duration (the contract stretches 10 years, although the initial batch of 90 aircraft is due for completion by the end of 2026), it's possible that Taiwan, too, will be buying a lot more than just the 66 fighters it initially ordered.

The world's most popular fighter jet

Presumably, one of the reasons the F-16 remains so popular is its cost. With a roughly $30 million price tag, an F-16 sells for less than 80% of the sticker price of Sukhoi's Flanker. Lockheed's savvy move to begin producing the F-16 in India, moreover, promises to help the F-16 undercut the competition on price for years.

But you don't even need to project cost-cutting benefits to see how this deal will benefit Lockheed Martin stock and the company's bottom line.

What it means for Lockheed Martin

So what does this sale mean for Lockheed Martin, in dollars and cents? Here's how I look at it:

Lockheed Martin's Aeronautics division, which builds both the F-35 and the F-16, has averaged operating profit margins in the 10.5% to 11% range over the last five years, according to data from S&P Global Market Intelligence. These margins, however, have been depressed by the large number of lower-margin F-35s that Lockheed has been delivering of late, and the relatively fewer numbers of F-16s, where the production design is more mature -- and more profitable.

What comes after this contract runs out? If I were to venture a guess, the fact that someone (i.e. Taiwan) has resumed buying F-16s in bulk is likely to reinforce the airplane's popularity, even as the massive economies of scale generated by the bulk buy improve Lockheed's profits on each plane sold.

Combined with maintenance and upgrades revenue from servicing all the new planes -- and of course, the company's growing F-35 business -- I see this month's F-16 arms sale as a significant tailwind that will lift Lockheed Martin shares for years to come.