For the umpteenth year in a row, Lockheed Martin's (NYSE:LMT) F-16 remains the world's most popular fighter jet.

The manufacturer of everything from F-35 stealth fighters to Blackhawk helicopters to the venerable F-16, Lockheed Martin is the world's biggest pure-play defense contractor. And according to the data specialists preparing Flightglobal's 2019 World Air Forces report, 45 years after the F-16 Fighting Falcon first took flight, some 2,280 of Lockheed's F-16s are still flying around the globe -- 15% of all fighter planes in existence today.

And as we just found out, that number is about to get a little bit bigger. 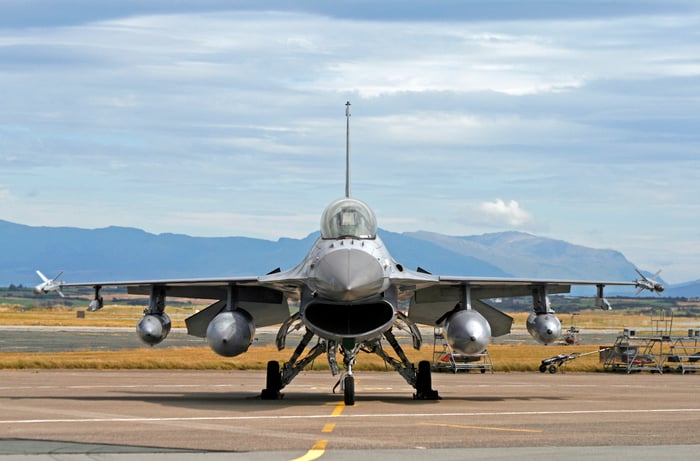 $8 billion for defense, but not one cent for tribute

You can thank Taiwan for that -- and the Communist government of China, which has lined the Taiwan Strait with missiles, bombers, and warships in an effort to remind the Taiwanese not to stray too far from the "One China" party line.

In an effort to shore up its defense and deter China from aggression, Taiwan has been lobbying the United States government -- successfully -- to sell it everything from missiles to main battle tanks. Last week, Taiwan got another of its wishes granted, when the U.S. Defense Security Cooperation Agency (the foreign military sales arm of the Pentagon) notified Congress of a pending sale of 66 F-16C/D Block 70 fighter aircraft for a total purchase price of $8 billion.

As DSCA told Congress: "This proposed sale is consistent with U.S. law and policy as expressed in Public Law 96-8" (the Taiwan Relations Act). Furthermore, it "serves U.S. national, economic, and security interests by supporting the recipient's continuing efforts to modernize its armed forces and to maintain a credible defensive capability [and] ... to provide for the defense of its airspace."

Now, not all of the $8 billion will go to purchasing planes, proper, of course. (Eight billion dollars divided by 66 aircraft would work out to $121 million apiece -- a very high price considering that Lockheed Martin's much more advanced F-35 stealth fighters now sell for less than $90 million!) Included in Taiwan's order is such ancillary equipment as F110 General Electric engines to power the aircraft, APG-83 Active Electronically Scanned Array Radars from Northrop Grumman, and AN/ALQ-211 A(V)4 units from L3Harris, all necessary to help the planes perform their mission.

But as the Pentagon's contract announcement makes clear, all of these equipment sales will be routed through Lockheed Martin, the "principle contractor" on the sale.

So what does that mean for Lockheed Martin stockholders?

According to data from S&P Global Market Intelligence, Lockheed Martin's aeronautics division, which builds the F-16, is not only the company's biggest business segment, booking revenue in excess of $21.3 billion per year. It's also the company's biggest profit generator, and its second-most-profitable division by profit margin, earning an operating profit margin of 10.6%.

Applied to the $8 billion value of the Taiwanese F-16 fighter jet sale, that works out to a likely $850 million operating profit that Lockheed will book on this deal, or more than 10% of the profit that all of Lockheed generated over the past year, and equivalent to about $3 for every share of Lockheed stock outstanding -- all from one single arms sale.

In other words, this is a very big deal for Lockheed Martin -- and proof positive that Lockheed Martin made the right call to shift production of the F-16 out of Texas (to reduce costs and free up space to build more expensive F-35s) but maintain production to supply a global market where the F-16 remains very much in demand.