The stock market soared on Monday, buoyed by news of a potential COVID-19 vaccine. The Dow Jones Industrial Average was by far the best performer of major market benchmarks, having lagged the most throughout 2020 and the coronavirus crisis. Meanwhile, gains for the S&P 500 were still solid, but the Nasdaq Composite missed out on the party.

As you'd expect, stocks that have been most directly affected by the pandemic were among the biggest winners on Monday. It doesn't come as any surprise that airlines, cruise stocks, and restaurants had some nice gains.

But a couple of stocks stood out for sizable gains. Berkshire Hathaway (NYSE:BRK-A) (NYSE:BRK-B) and ExxonMobil (NYSE:XOM) have struggled in 2020, but both were big gainers on Monday.

Buffett finds a stock to buy

Berkshire Hathaway's shares were up 7% on Monday. In addition to a lighter mood because of the vaccine news, the company led by Warren Buffett had its own announcement to add to the celebration.

Berkshire released third-quarter earnings over the weekend, and in many investors' eyes, the numbers were ugly. Sure, net income was up more than 80% from year-ago levels. But Berkshire's earnings have increasingly become a reflection of market movements rather than fundamental business success, because the insurance giant is now required to mark its massive stock portfolio to market. Strong gains in stocks from July to September outweighed a 32% drop in Berkshire' operating profit.

However, what made investors ecstatic about Berkshire was that Buffett made huge repurchases of shares during the quarter. Specifically, Berkshire spent nearly $9.3 billion buying back stock during the three-month period, and a look at its financial statements suggested that the repurchase activity continued in October as well. Overall, Berkshire has bought back about $16 billion in shares during 2020.

Berkshire's struggles might not be over, but a return to more traditional value investing could help send the Buffett-led giant's share price higher. Fundamentally, Berkshire still owns strong businesses that will stand the test of time.

Gassing up at ExxonMobil

ExxonMobil did even better, jumping 13%. The entire oil sector did well, because investors are hopeful that a COVID-19 vaccine that gets things back to normal will make consumers and businesses readopt old habits and use more energy. 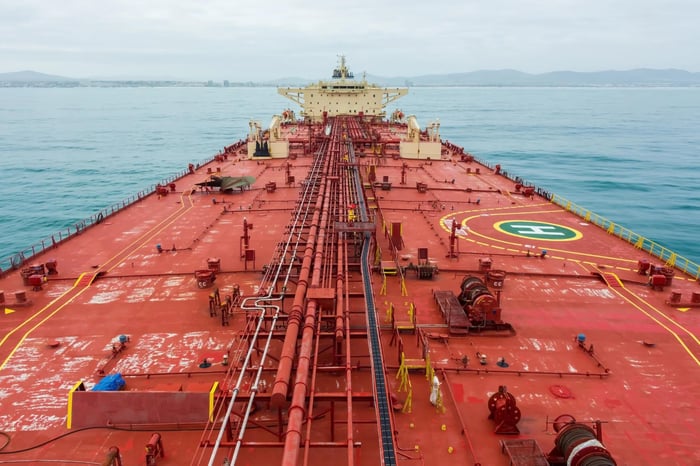 Crude oil prices jumped more than $3 per barrel on Monday. That brought prices back above $40 per barrel, a line that has had psychological importance for energy investors for some time now.

Oil markets aren't just celebrating a potential return to higher demand. Crude also got support from Saudi Arabia, which recently announced that it would choose not to raise production along with the rest of OPEC over the next couple of months to try to keep prices higher. OPEC nations have definitely felt the hit from low oil prices, and they're looking for whatever means they can find to bolster crude.

There's plenty of uncertainty about the future of energy, and especially about whether oil giants like ExxonMobil will remain relevant. Today's gains didn't come close to wiping out ExxonMobil's losses for the year, and investors will need to see a lot more to feel fully confident.