Markets soared today after Pfizer released early data that showed its COVID-19 vaccine has been more than 90% effective. While some tech stocks dipped on the news, bank stocks were flying. Large U.S. banks like JPMorgan Chase (NYSE:JPM) were up more than 15% at one point, while many regional and community bank stocks performed even better.

Although a COVID-19 vaccine may not be widely available for months, the idea that a successful one could be released in 2021 is huge for banks. Here's why. 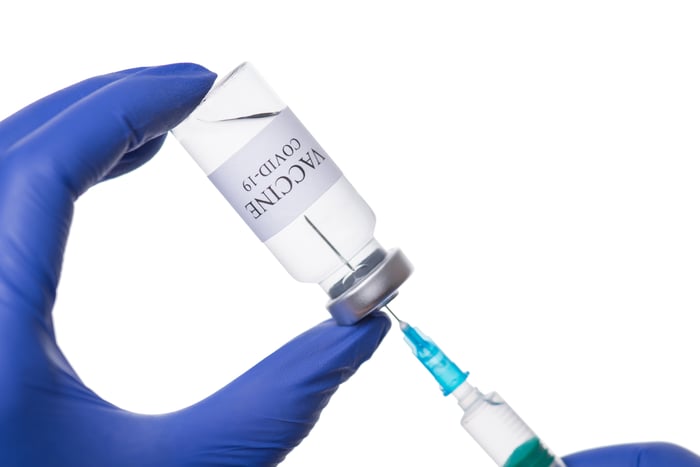 Aligning a vaccine with stimulus

The prospect of having a COVID-19 vaccine by the end of next year is significant because that could be an important time already for banks.

The market has hit banks so hard this year partly because they have collectively set aside hundreds of billions of dollars to cover potential loan losses. Credit quality is one of the biggest factors that bank investors watch, because bad loans can sink a bank. So when the coronavirus closed broad swaths of the economy for more than a month, and sectors like travel and entertainment, lodging, retail, and energy looked extremely vulnerable, banks did too. Banks are one of the most closely linked sectors to the economy, so when the economy struggles, banks follow.

But when Congress passed a huge stimulus earlier this year and the Fed intervened at an unprecedented level, the outlook for loan losses improved. Loan deferrals significantly declined across the industry, with most borrowers who entered the program returning to making payments on their loans. Additionally, credit metrics such as loan write-offs and delinquencies are down on a year-over-year basis, something you would never expect to see during a recession.

Many bank management teams are now forecasting that significant loan losses won't materialize until ... the second half of 2021. And that's without factoring in a second round of stimulus. If another stimulus passes, which I think will happen, significant loan losses may not occur until the end of 2021, or maybe even early 2022.

After 2021, the outlook is uncertain

The positive news from Pfizer is further evidence that an effective vaccine may be released to at least a portion of the public in 2021. If an effective vaccine could be released to the elderly, front-line healthcare workers, and schools, then the economy may be able to start churning at a more normal pace. Younger people could probably take more risks and venture out more because they wouldn't be putting others at such high risk. People could start going to gyms, hotels, dine-in restaurants, and other hard-hit businesses at a higher rate. These businesses, which are trying to ride out the storm, would then return to more normal revenue and could afford to keep making their loan payments, or potentially even further invest in their business. This is all hypothetical, of course, but this is the kind of thinking and outlook that would give investors a much better outlook on the sector, in my opinion.

Take M&T Bank (NYSE:MTB), whose stock surged by close to 27% at one point today. Even with that surge, the bank is down significantly from its high of $173 per share this year. It has also been hit harder than some of its regional peers. While this is a top-performing bank historically, about 9% of its total loan portfolio is in the hotel and retail industries in places like New York City that were initially hit very hard by the pandemic. Office loans make up another 5% of the portfolio. But M&T Bank does have good underwriting standards, and many of these hotel and retail borrowers have put down a sizable down payment on their loan. If occupancy rates at hotels can rise and foot traffic at retail businesses improves sooner than later, then the outlook on these loans, and therefore the bank as a whole, quickly gets a whole lot better.

However, there is a timeline related to this sequence. A second round of stimulus can bridge a lot of borrowers likely until midway through or the end of 2021. But if an effective vaccine is not ready for a few years, the so called "bridge" may break down, and I am not sure a third round of stimulus is realistic.

The sooner the better

The coronavirus pandemic is first and foremost a public health crisis. Many banks have been lending responsibly, but there is only so much you can do in a recession this severe, especially if it lasts for a few years or there is a very slow economic recovery. Congress, the Federal Reserve, and banks have done what they can to push off loan losses. But at some point, time will run out. That's why an effective vaccine in 2021 is so important to bank stocks, and why the recent news by Pfizer is such a catalyst.