Shares of Arena Pharmaceuticals (NASDAQ:ARNA) are plummeting today, down by 22% as of 1:35 p.m. EST, after the biotech released data from a mid-stage study of etrasimod in patients with atopic dermatitis, commonly called eczema.

The bad news is the study failed. The good news is that there are some hints that etrasimod might be helping patients with eczema.

The study used the Eczema Area and Severity Index (EASI) as the primary endpoint. Using that measurement, there wasn't a statistical difference between either of the two dose levels of etrasimod compared to a placebo after 12 weeks of treatment. 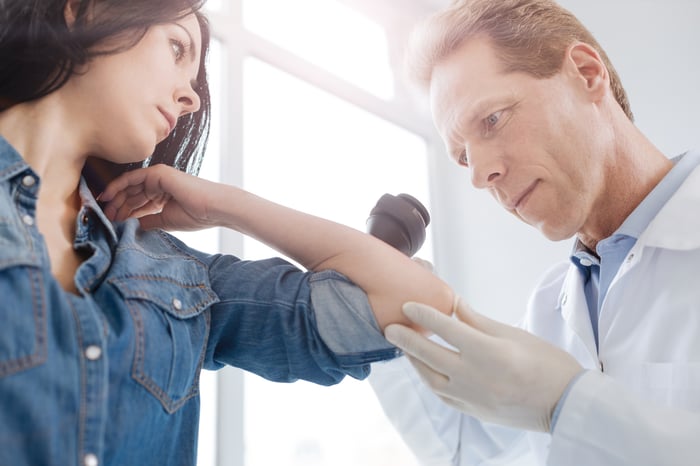 But there are a couple of caveats that should give investors some hope. About 19% of the patients taking the top dose had a dose interruption between weeks 4-8. When looking at just patients who completed the study with full exposure to the drug over 12 weeks, the high dose produced a statistically significant improvement in EASI.

Also on the plus side, Arena noted there was no plateau of effect at week 12, suggesting etrasimod might show a stronger effect in a longer study.

Finally, while not part of the primary analysis, the high dose of etrasimod improved patients' skin on the validated Investigator Global Assessment (vIGA). Nearly one-third of patients had clear or almost clear skin on the vIGA after 12 weeks, which was statistically better than the placebo.

Despite the mixed results, Arena has decided to press on to a late-stage study of etrasimod in patients with eczema, which will likely be 16 weeks long to capture the potential extra efficacy.

Even if etrasimod doesn't work in patients with eczema, there's still hope for the drug. The biotech is testing etrasimod in a late-stage study of patients with a gastrointestinal disease called ulcerative colitis. Enrollment is scheduled to be complete by the end of this year, but unfortunately the treatment requires 52 weeks, so data won't be available until the very end of 2021 or early 2022.