Addressing the vigorous, worldwide growth in protein demand, Tyson Foods (NYSE:TSN) announced today it intends to build big new poultry-processing facilities in Thailand, China, and the Netherlands. The company says these will create hundreds of local jobs, but more importantly from an investing perspective, will also allow Tyson to pump 100,000 metric tons, or about 220 million pounds, of processed fowl into both the Asian and European markets.

Tyson declares it aims to become "the leader in protein." CEO Dean Banks says the new production-facility "investments allow us to increase our in-country operations and global export capabilities." The plants will churn out fully cooked poultry for sale in each region. 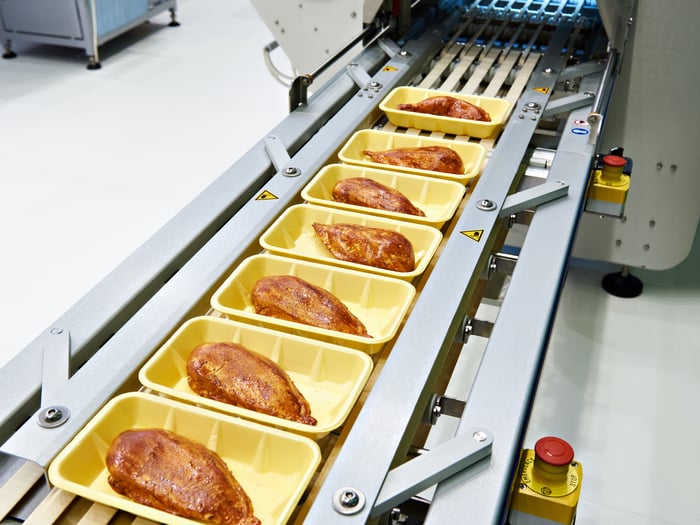 The planned operations follow Tyson's recent series of partnerships and acquisitions in targeted international markets. The company says its international sales, including both local production and exports from the U.S., reached $5.4 billion in fiscal year 2019.

Tyson's aggressive push into the international protein market is part of a multi-pronged overall growth strategy, which includes everything from boosting Asian poultry production with this latest move to the test launch of plant-based "Unchicken Sandwiches" whose pea-protein filets are made by Tyson for the Jack in the Box, Inc. restaurant chain.

Tyson's shares are still trading significantly lower than they were prior to the arrival of COVID-19, despite the African swine fever virus boost to international, and particularly Chinese, meat demand. In an effort to improve its performance, Tyson named a new CEO, its president Dean Banks, back in August. Banks took up his duties on Oct. 3 and has an extensive background in technology rather than food; it's still too soon to know how this factor will affect Tyson's strategic success.