Estimating that the world reached peak oil demand last year, BP (NYSE:BP) has articulated considerable interest in renewable energy. Of the various niches associated with nontraditional energy sources, the company is focusing its efforts on hydrogen. Yesterday, BP announced that it's partnering with the Danish energy company Orsted to develop a wind-powered solution to generate green hydrogen at the Lingen refinery in Germany.

Initially, BP expects the project, scheduled to begin in 2024, will consist of a 50 megawatt (MW) electrolyzer that will split water into hydrogen and oxygen gases, generating one metric ton of renewable hydrogen per hour. Should the project prove successful, it may grow considerably. Speaking with Reuters, Louise Jacobson Plutt, BP's senior vice president for hydrogen, said that "the project could be expanded to up to 500 MW at a later stage to replace all of Lingen's fossil-fuel-based [blue] hydrogen." 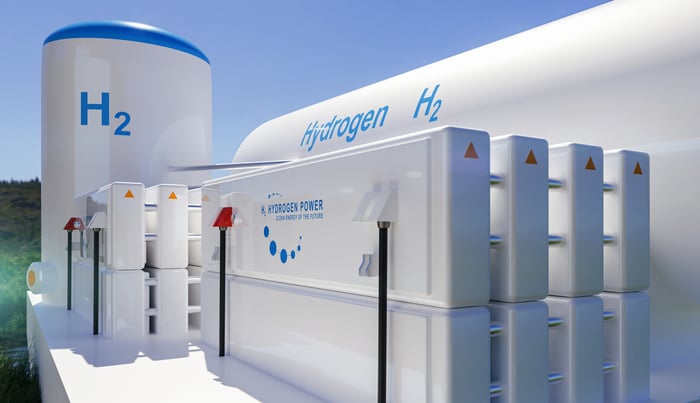 While BP is excited about the green hydrogen-generation project, it's unlikely that it will move the needle on the company's finances. Instead, investors may have to wait another 10 years before they see an impact. On the company's recent Q3 2020 conference call, CEO Bernard Looney said:

I think more broadly, I think hydrogen is a core part of what we believe in for the future. Hydrogen is a business that will materialize for BP, probably in the 2030-plus time frame, not in the here-and-now time frame. But we will look to build that business out over the coming decade, and I think the potential to become material in the period after 2030 and we'll be looking at it on two main dimensions, on the heavy industry and power side, it will be a mix of green and blue hydrogen.

This project is one of what may be many for BP, since the company has stated a target of gaining 10% of global hydrogen market share.