The pandemic creates challenges. Does it also make the stock a good opportunity?

MGM Resorts International's ( MGM 5.08% ) stock price has taken a shellacking this year, down by 29%. Obviously, the pandemic has had an outsized effect on the company's patronage, including when it closed to the public for a time.

If this was a typical economic downturn, patient investors might wish to pile in and wait for the cyclical upturn. Unfortunately, COVID-19 has created a most unusual time. So, if you are contemplating purchasing MGM's shares, what should you do? 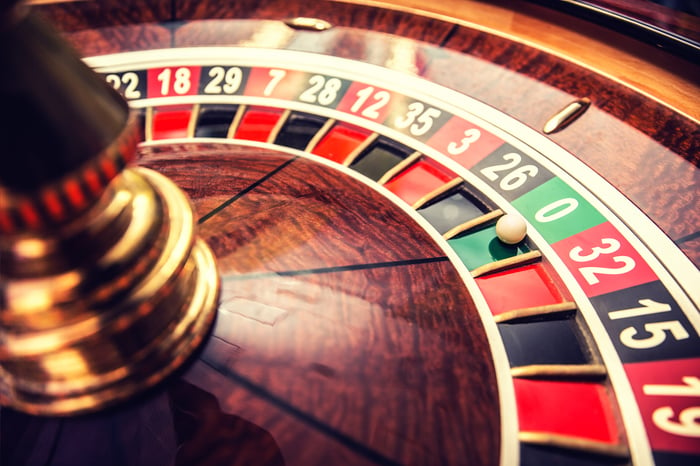 While MGM's casino resorts are located in Las Vegas, other parts of the U.S. (such as Mississippi and New Jersey), and in China, it generates most of its revenue domestically. Its Las Vegas business accounts for almost 50% of its annual revenue, and regional operations represent another 30%.

In mid-March, U.S. state and local government authorities enacted restrictions that forced MGM to close physical access to its resorts. China also enacted travel restrictions that hurt operations there. While all of MGM's properties are now currently open, many of them are operating at a reduced capacity.

The company's third-quarter results bear out this tough operating environment. Its revenue dropped by 66% compared to a year ago, to $1.1 billion.

Unfortunately, the number of COVID-19 cases has been spiking, with Las Vegas and New Jersey cases on the rise. Recently, New Jersey's governor stated that he is considering new rules to slow the pandemic's spread, which may affect MGM's Atlantic City properties. In short, it doesn't look likely that MGM is going to see any relief from increased foot traffic anytime soon.

After cutting its dividend earlier this year, which the company stated was temporary, the uncertain environment means investors cannot count on MGM bringing back its payout to the prior level anytime soon. The payment now totals a nominal penny per year compared to the previous $0.60.

Online betting no sure thing

BetMGM, its online betting platform, offers a way for its users to gamble without going into a casino. CEO Bill Hornbuckle stated in the earnings release that "...we have modified our operating model to adapt to the current environment and we are executing on our long-term initiatives, particularly in U.S. sports betting and iGaming, where BetMGM has gained significant momentum."

However, while this may provide a significant benefit to MGM down the road, right now it is not a major part of its business. This year, management expects BetMGM to produce $150 million to $160 million of revenue.

But this will not come close to filling this year's revenue decline. With nearly $13 billion of revenue from gaming and other sources such as room rentals, food purchases, and entertainment last year, the online portion is a mere drop in the bucket.

With these rough times continuing and no clear picture for when things will get better, the shares are too much of a gamble right now. Long-term investors have a better chance of achieving success elsewhere.

Why Travel and Leisure Stocks Jumped on Thursday