As of Tuesday, there have been more than 50.9 million confirmed cases of the novel coronavirus worldwide, and 1.26 million deaths. In the U.S. alone, researchers estimate that the total economic impact (healthcare costs, lost productivity from lockdowns and quarantines, travel disruptions, etc.) of the rampant spread of the SARS-CoV-2 virus will likely reach $16 trillion. And the pain won't end in 2020 -- the Congressional Budget Office projects a total of $7.6 trillion in lost output over the next decade, meaning either more Treasury offerings, austerity measures, higher taxes, or all three will be needed to make up for the budget deficit.

Luckily, Pfizer (NYSE:PFE) and BioNTech (NASDAQ:BNTX) have developed a COVID-19 vaccine candidate (BNT162b2) to help put an end to the pandemic. BNT162b2 is currently the only experimental vaccine that has demonstrated efficacy in large-scale studies, and it could become the first candidate authorized for use by regulatory agencies around the world.

But just how good is the vaccine data, and why does it matter to current or prospective investors in either company? 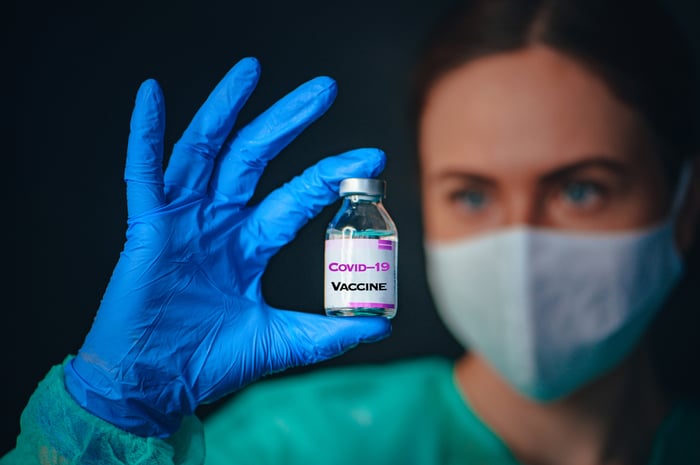 Pfizer and BioNTech announced interim results from their phase 3 trial on Nov. 9. The global phase 3 trial involved 43,538 participants whose geographical location put them at high risk of acquiring COVID-19. During the study, participants were assigned to receive either two doses of BNT162b2 or a placebo. After enough members of the trial became infected with the virus, researchers compared the rate of COVID-19 infection between the groups.

The trial's first interim analysis indicates that after 94 confirmed cases of COVID-19 in the overall study, the vaccine was at least 90% effective in preventing a viral infection 28 days after initiating the two-dose schedule. In other words, the overwhelming majority of confirmed illnesses came from the placebo group. No serious safety issues were reported. The two companies are waiting for until at least the third week of November for safety data before requesting an emergency use authorization (EUA) from the U.S. Food and Drug Administration (FDA).

What do these results mean for investors?

The study protocol conveys that if BNT162b2 demonstrates at least 80% efficacy at the current analysis stage, the p-value for the vaccine data must be less than 0.037. The p-value is a statistical measurement that must generally be less than 0.05 for a finding to have significance. Since we know that BNT162b2 demonstrated more than 90% efficacy, the p-value for the results is likely to be far less than 0.037, meaning the candidate likely achieved robust statistical significance. Keep in mind that the FDA only requires coronavirus vaccines to achieve 50% efficacy for approval.

As a result of these above-and-beyond results, it's more than likely that the study will be successful at the final stage of analysis, and that the treatment will receive an EUA from the FDA. With an efficacy level this high, Pfizer and BioNTech's candidate sets a high competitive bar for its competitors, including those from Moderna (NASDAQ:MRNA), AstraZeneca (NASDAQ:AZN), and Novavax (NASDAQ:NVAX).

Since the study took place in an open environment, one could deduce that viral mutations did not materially affect vaccine efficacy; patients were exposed to the currently circulating strains of the virus, rather than being kept in a "closed" space away from any potential mutations. If true, that's wonderful news, as it would mitigate or eliminate a key concern about the coronavirus: that ongoing mutations would render ineffective the experimental vaccines based on earlier variants of the virus.

Another critical detail: Forty-two percent of the trial participants came from diverse racial and ethnic backgrounds. Generating efficacy data from across all population groups increases Pfizer and BioNTech's ability to generate revenue -- as well as immunity -- internationally, rather than in just one specific part of the world.

At the edge of the finish line

By the end of 2021, Pfizer and BioNTech expect to produce 1.3 billion doses of BNT162b2. That is, theoretically speaking, enough for 650 million people; the U.S. population is about 326 million. Getting the doses to those millions of people, however, might be the biggest challenge. More than half of the world's vaccines go to waste due to logistical or transport issues, according to the World Health Organization (WHO).

Given the price of $20 per dose, Pfizer and BioNTech have the potential to generate $26 billion worth of sales from BNT162b2 next year; the two companies will share their gross profits equally through their agreement. While this isn't news to investors, the probability of attaining that revenue figure has increased significantly after this data announcement.

Thirteen billion dollars would be a pretty significant opportunity for BioNTech, which is currently in the development stage and has no product revenue. But it would also be meaningful for large-cap Pfizer, which is seeing generic competition ramp up for its key products, sending its revenue down 4% year over year to $12.1 billion in Q3 2020. (Pfizer is working on a spinoff of its generics business.)

So far, the two companies have secured more than 573 million BNT162b2 preorders from 13 countries and the E.U., as well as options to supply an additional 600 million doses of the vaccine. I highly recommend that biotech investors consider shares of Pfizer and BioNTech as they (likely) begin to deliver on those orders, as well as securing further supply agreements with other countries on the basis of their superb vaccine science.  .