Warren Buffett isn't exactly viewed as a big gambler. Sure, the Oracle of Omaha takes risks with his investments. For the most part, though, his risks are calculated ones that work in his favor.

But earlier this year, Buffett's Berkshire Hathaway (NYSE:BRK.A) (NYSE:BRK.B) invested in what can accurately be described as one of the legendary investor's riskiest wagers in years. Now, that risky bet is on the brink of bombing big time. 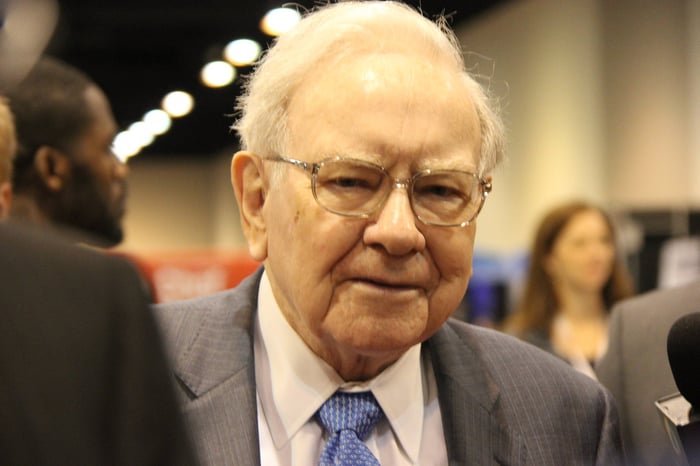 There's exactly one biotech stock in Berkshire Hathaway's investment portfolio. A regulatory filing with the Securities and Exchange Commission in February revealed that Berkshire had bought more than 648,000 shares of Biogen (NASDAQ:BIIB). Since then, Berkshire has sold around 5,400 shares.

It seems likely that one of Buffett's two investment managers actually picked the biotech. However, Buffett apparently went along with the decision even if he didn't personally select Biogen.

Why would Berkshire buy Biogen? The stock was (and still is) cheap based on its price-to-earnings ratio. Biogen generates steady and strong cash flow thanks mainly to its multiple sclerosis (MS) drug franchise. Its product lineup also includes blockbuster spinal muscular atrophy drug Spinraza.

Perhaps more importantly, though, Biogen represented an opportunity for a huge payoff in relatively short order. The company had seemingly thrown in the towel on experimental Alzheimer's disease drug aducanumab in early 2019. However, Biogen announced in October of last year that it planned to file for FDA approval based on a new analysis of late-stage clinical studies evaluating aducanumab. Some analysts predicted that aducanumab could generate peak annual sales of up to $10 billion.

It now seems likely that aducanumab will instead achieve peak annual sales of $0. Last week, an FDA advisory committee voted overwhelmingly against the drug.

In this case, some observers think the FDA's credibility is on the line. Baird analyst Brian Skorney wrote to investors, "Approving aducanumab, in the face of such an overwhelmingly negative vote and commentary, is virtually impossible and would destroy the agency's reputation at a very tenuous time for the regulator, ahead of potential actions on COVID-19 vaccines."

Biogen hasn't been a great stock for Berkshire, even excluding the FDA advisory committee's thumbs-down vote. It was the second-worst performer in Berkshire's entire portfolio in October. If aducanumab doesn't win FDA approval, the stock could really bomb.

Without aducanumab, Biogen's growth prospects look very weak. The company's MS drugs are losing market share in the face of competition from both branded and generic rivals. Spinraza is no longer the growth story it once was. Biogen's late-stage pipeline isn't particularly impressive.

The FDA has until March 27, 2021, to make its final approval decision on aducanumab. It's quite possible that Berkshire's and Buffett's riskiest bet in years could also become its biggest blunder.