A couple of years ago, Warren Buffett made headlines when he said that bitcoin was "probably rat poison squared." Buffett believes that using dollars to buy cryptocurrency is speculation and not an investment. "Cryptocurrencies basically have no value and they don't produce anything," he said.

Buffett's hostility to crypto is probably based in large part on his shunning of tech stocks in general. Buffett doesn't invest in things he doesn't understand well, and crypto is as hard to understand as any technology (maybe harder). His criticism of crypto is similar to what we might say about gold. It's a rather useless metal with no intrinsic value outside of supply and demand. And yet gold has long been seen as a hedge against inflation. Crypto works the same way.

Indeed, crypto might replace gold as a store of value for people who are dubious about fiat currency. Right now, crypto and gold are similar. It's an asset you hold in the hope that you can trade it in for more money in the future. But unlike gold, it's possible that crypto will actually become a currency in its own right. That is to say, one day we might be able to use crypto to actually buy goods and services. And that's where PayPal Holdings (NASDAQ:PYPL) and Square (NYSE:SQ) come in. 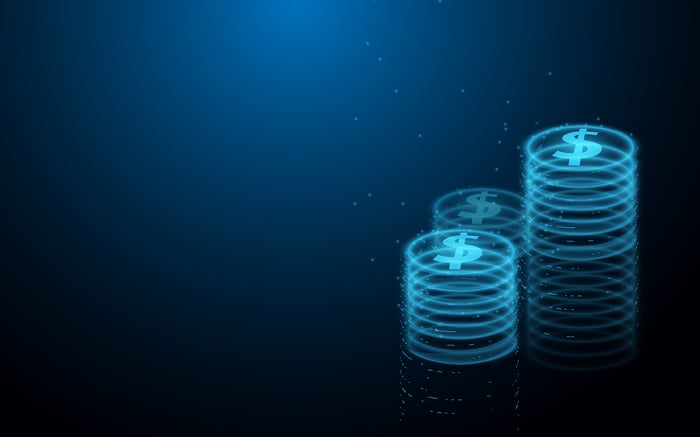 According to PayPal, the future is here

On PayPal's most recent conference call, CEO Dan Schulman said: "We will rapidly move at the beginning of next year and allow consumers to use cryptocurrencies as a funding instrument to shop across all 28 million of our merchants. This solution will not involve any additional integrations, volatility risk or incremental transaction fees for either consumers or merchants and will fundamentally bolster the utility of cryptocurrencies."

In the U.S., people will still be using dollars to make purchases. But what PayPal will do is enable instantaneous transfer from crypto into fiat currency at a step rate. So at checkout in a store, a PayPal user can immediately turn cryptocurrency (held in a digital wallet) into cash, and use that cash to make payments in any of the 28 million merchants in the PayPal system.

How big a market is this? The market capitalization of the major cryptocurrency, bitcoin, is about $200 billion. A lot of people who own bitcoin are long-term holders of the cryptocurrency and have no plans to spend it.

What might discourage the use of crypto to buy goods and services are taxation issues. Right now, if you were to spend bitcoin to buy a soda, you would pay sales tax at the checkout counter. But you would also owe capital gains tax on the bitcoin sale. This might limit bitcoin's usefulness as an actual currency.

Nonetheless, the rise of bitcoin and other cryptocurrencies is very bullish for digital wallets and virtual exchanges. As cryptocurrencies become more and more mainstream, the value proposition for PayPal becomes even stronger. And the demand seems to be high. As Schulman said on the call: "Our waiting list was 2 times to 3 times of what our expectations were." 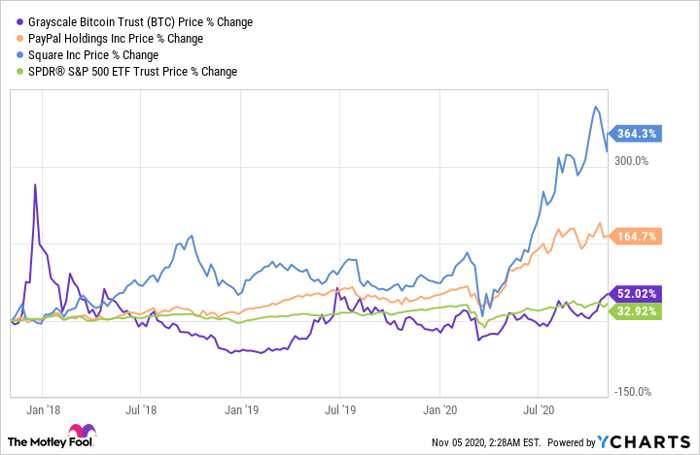 Square is very bullish on crypto

In October, Square made headlines with a $50 million bitcoin purchase. Square has been a huge proponent of the cryptocurrency. In the third quarter, Square generated $1.63 billion of bitcoin revenue, up 1000% from a year ago. While Square has been buying and selling bitcoin for a couple of years now to facilitate trades for its customers, the $50 million is a long-term strategic bet on the future of bitcoin.

Overall in the quarter, Square had $3.03 billion in revenue. So bitcoin trading made up a significant part of the company's revenues for the quarter. Indeed, in Cash App, bitcoin revenue ($1.63 billion) surpassed dollar revenue ($435 million) for the third quarter in a row.

Square's dramatic growth as a fintech has mirrored the rise of cryptocurrencies. And PayPal's move into bitcoin validates what Square is doing. We are seeing major banks like JPMorgan Chase jump into cryptocurrencies as well.

Investors should not be afraid of these new currencies, but see them as a way to diversify risk. And while the value of bitcoin might shift dramatically, Square and PayPal will profit no matter how it shakes out. When there's a gold rush, invest in the companies providing picks and shovels.