A sales update in October meant that investors already had some key information about McDonald's (NYSE:MCD) third-quarter operating trends. The fast-food giant couldn't wait to reveal that it had returned to sales growth in the core U.S. market and was close to positive territory on a global basis.

But its official Q3 results released earlier this week added important context to that revenue figure and gave investors new details about McDonald's 2020 outlook. CFO Kevin Ozan talked about those issues in a conference call with Wall Street analysts.

Let's look at some of the highlights from that presentation. 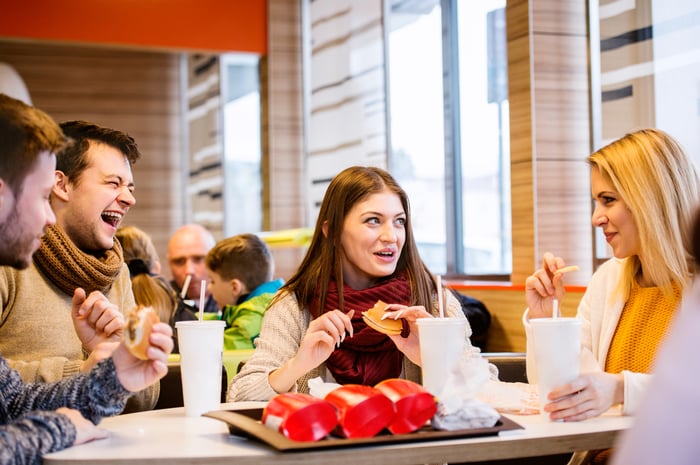 Breaking down that growth figure

Comparable sales were up 4.6% with positive comps in each month of the quarter, including low double-digits in September, marking our highest monthly comp in nearly a decade. -- CFO Kevin Ozan

We knew that the U.S market returned to growth in the three months that ended in late September, but McDonald's revealed more about the impressive pace of that rebound. Demand trends improved in each month from the low mark of 19% year-over-year declines in April. The chain expanded at a double-digit percentage rate in September, giving it momentum heading into Q4.

Executives credited McDonald's drive-through platform for helping sales jump, even as customer traffic stayed low. The chain had some popular promotions and menu launches, too, including the spicy version of its chicken nuggets.

We had a sizable marketing war chest to invest ... to further accelerate recovery. The U.S. began to leverage this marketing investment in a big way ... during a pivotal time when consumers were looking for reasons to eat out again. -- Ozan

McDonald's joined rivals, including Starbucks and Chipotle, in ramping up advertising and marketing spending over the last few months. The strategy worked, even though it pressured profitability.

The fast-food giant said it returned to growth in the key breakfast hours, but also added to its strong showing around dinner time. "The success of this platform," Ozan said, "demonstrates how powerful it can be when our brand, digital engagement, and affordability are all working together."

We expect performance will continue to vary across the [international fast-food] markets, given the recent increase in local restrictions in most markets. -- Ozan

McDonald's said October comps landed up in the mid-single digits in the U.S., compared to low-double-digit percentage gains in the final month of Q3. The international division isn't faring as well and is being dragged down by some weak spots such as Spain, France, and Italy. Several markets might even turn lower, thanks to additional COVID-19 containment efforts that are just now starting up again.

That international challenge might mean it won't be until early 2021 that McDonald's returns to growth on a global basis while the business begins climbing back toward the record profitability level it set before COVID-19.

But the Q3 trends mean investors have good reason to expect the chain to maintain or even expand on its market-share leads, both during restaurant-industry slowdowns and through the rebound months that follow over the next few quarters. Those wins should support investor returns, which have just kept pace with the market so far in 2020.