Searching for sustainable growth can be a daunting task. Some companies may display a brief period of strong growth that tapers off as the business loses its momentum, while others find themselves surrounded by competitive forces that hinder further progress. The key is to find businesses that possess long-term catalysts that allow them to maintain their growth rates.

Such catalysts may come in the form of new trends or habits that endure over the years. The COVID-19 pandemic is an event that has dramatically altered human habits, resulting in new practices that are likely to persist over time. Certain trends that were slowly taking root have been accelerated by the crisis, such as digitalization and telecommuting. Companies that can latch onto these new trends may experience strong growth spurts that can last for years.

Here are three high-growth companies that are adapting themselves to these emerging trends. If they can sustain their growth rates, their stocks could soar significantly in tandem with their improved financial performance. 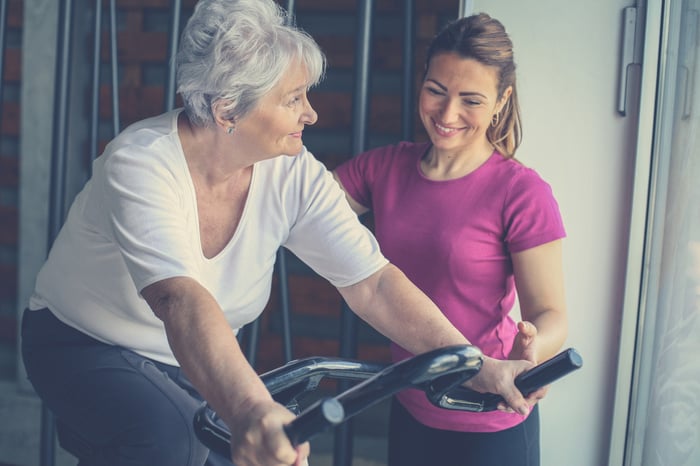 Peloton (NASDAQ:PTON) has just released its fiscal 2021 first quarter earnings, and it was yet another blowout quarter for the exercise equipment company. As the pandemic swept across the world, more and more people kept indoors to avoid being infected. Being unable or unwilling to venture from the safety of their homes, many took it upon themselves to purchase treadmills and stationary bikes to keep fit, thus providing strong tailwinds for Peloton's business.

The company not only sells exercise equipment but also offers connected fitness subscriptions that allow customers to access workout videos through an app on their mobile phones. Subscription revenue constitutes a recurring income stream for Peloton, and the growth in its member base means the company will enjoy higher overall revenue certainty. Fitness subscriptions more than doubled from 563,000 to 1.3 million during the quarter, while total workouts quadrupled from 19.2 million to 77.8 million over the same period.

Sales of fitness products soared 274% year over year, while subscription revenue rose 133% year over year.  Demand for the company's products is so strong that Peloton reportedly could not keep pace, and the company has announced that it needs to add new manufacturing capacity and beef up its logistics network to cope. While this may sound like a happy problem to have, growth at such breakneck speed could result in problems if the company has insufficient supply to cater to burgeoning demand.

With many more telecommuting and shopping online from the comfort of their homes, e-commerce volumes have soared worldwide. A big beneficiary of this trend is MercadoLibre (NASDAQ:MELI), one of the largest e-commerce players in Latin America. Already growing steadily in the years before the pandemic hit, the acceleration in adoption of digital payments and online commerce has boosted the company's business to a whole new level.

In the company's recent third quarter earnings release, it reported that unique active users nearly doubled from 39.6 million to 76.1 million. Gross merchandise value, a measure of the value of transactions passing through MercadoLibre's e-commerce platform, rose 62% year over year to $5.9 billion. Total payment volume jumped from $7.6 billion to $14.5 billion during the third quarter, underscoring the rapid adoption of the company's integrated payments platform Mercado Pago.

The surge in revenue has resulted in MercadoLibre reporting a healthy net profit for the first nine months of this year of $49.9 million, reversing a $118 million loss in the same period last year. Pedro Arnt, the company's chief financial officer, remarked that these robust numbers were the result of improved service levels and a wider breadth of items offered to buyers. MercadoLibre continues to improve and enhance its service offerings, thereby assuring itself of continued growth in the years ahead.

Beyond Meat (NASDAQ:BYND) is one of the fastest growing plant-based meat manufacturers. The company has products that emulate the taste and texture of chicken, beef, and pork and has successfully sold its products in multiple countries around the world. Beyond Meat's third quarter earnings report showed an unexpected slowdown in the foodservice segment as the impact of restaurant and food outlet closures temporarily stalled the company's growth. However, note that the second quarter already saw most of these revenues front-loaded, resulting in a still-strong 53% year-over-year growth in revenue for the first nine months of 2020.

The company continues to roll out new products such as its Beyond Breakfast sausage links, designed to deliver the same taste and texture as real pork. Unlike actual pork, Beyond Meat's new product has 40% less sodium and no antibiotics or cholesterol, making it a much healthier choice for customers who seek a healthier diet.

Apart from new product innovations, Beyond Meat is also forging partnerships with leading fast-food players such as McDonald's (NYSE:MCD) and Pizza Hut, one of the subsidiaries of Yum! Brands (NYSE:YUM). McDonald's new McPlant burger features a new plant-based patty and was developed in conjunction with Beyond Meat, while two new pizzas featuring meat-free Italian sausage toppings have been added to Pizza Hut's new pizza lineup.