The fulfillment warehouse initiative means the storefront platform is poised for a different type of expansion.

E-commerce platform Shopify (SHOP 4.41%) has showcased the strength of online retail with its rapid growth and tremendous performance throughout the pandemic. Now, with the launch of the Shopify Fulfillment Network under its belt and designs on two-day U.S. shipping, is Shopify set to be Amazon's (AMZN 2.57%) newest upstart challenger?

Warehouse fulfillment is a plus

The coronavirus pandemic accelerated the consumer shift to online shopping, and Shopify has benefited greatly from the wave of entrepreneurs rushing to set up digital storefronts. The company's third-quarter results reaffirmed this trend as total revenue grew 96.5% year over year and 7.4% from the previous quarter. Subscription solutions revenue, which comes largely from monthly subscriptions to Shopify plans, increased 24.9% quarter on quarter as free trials converted to paying accounts. What makes this year notable beyond new shop creation, however, is how Shopify is rolling out features that support its merchants for long-term growth. 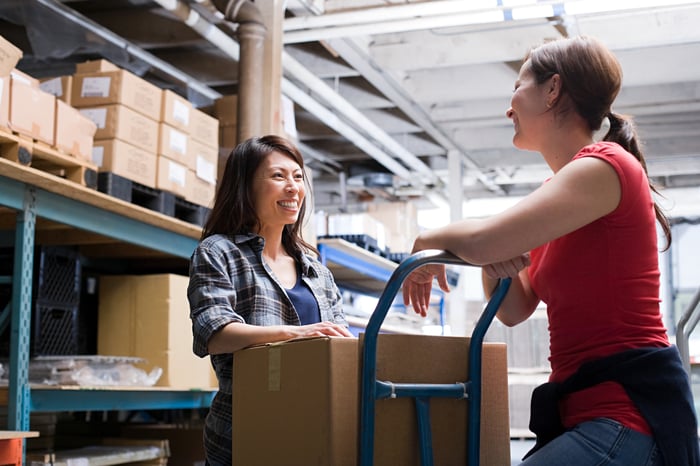 The company's current, sky-high growth rate is highly dependent on factors like unemployment, the length and severity of the pandemic, and consumer spending. New shops could open and fold quickly, never producing significant revenue for Shopify. But management has been proactive in situating the company for a strategically sound future, and the launch of Shopify Fulfillment Network is a huge step forward.

The company has continued to build its fulfillment foundation since 2019, developing software to connect merchants with the warehouse network and improving performance for an expected surge in 2020 holiday demand. Similar to Amazon, Shopify merchants who use the company's warehouse fulfillment services can easily manage their inventory and shipping, which is especially important during high-volume shopping events in the year. This network, once fully developed, could help convert smaller merchants into revenue machines for Shopify, proving beneficial to both parties.

Why choose Shopify over Amazon?

Amazon offers an already mature fulfillment network, so what benefits do a similar fulfillment roll-out offer for Shopify and its partners?

Shopify merchants benefit from personalized branding in a way that Amazon Marketplace shops do not. When warehouse fulfillment and shipping services are added into the mix, potential merchants have even more incentive to build their own brands on Shopify's platform instead of with a potential direct competitor like Amazon. In fact, 51% of Shopify merchants have already adopted Shopify Shipping, and the company is rapidly working to increase the scale of its warehouse fulfillment capabilities.

Shopify powers the storefronts for its merchants, while Amazon serves as the storefront itself. This allows Shopify merchants to personalize and focus customer attention on their products while benefiting from Shopify's payment portal and other services operating quietly in the background. Furthermore, Shopify has recently rolled out social commerce features, enabling social media users to quickly and easily buy products through Facebook, Pinterest, and TikTok, funneling more potential purchases into the Shopify network than before. By adding the option to store and ship inventory directly from Shopify warehouses, the company creates an all-inclusive net that simplifies the operations for an online store and reduces merchant churn.

However, Amazon merchants do benefit in their own ways: Small merchants and retailers who do not want to or cannot invest in their own marketing find customers through Amazon's giant platform, borrowing Amazon's brand strength to create trust with potential customers. But Amazon's brand is built on its efficiency and extensive catalog of products, so if Shopify moves to mimic Amazon Fulfillment services, it's possible that the smaller platform could capture more market share.

Shopify has been a tremendous performer this year, leading the company's share price to stratospheric highs as investors searched for pandemic-proof stocks. Yet the digital transformation is only in its infancy, despite the acceleration brought on by the pandemic, so even after COVID-19 fades into history, this e-commerce platform should continue to grow.

The stock currently trades for more than 45 times trailing 12-month revenue, while Amazon has a price-to-sales ratio of 4.5. There's no denying that much of Shopify's appeal is based on the promise of its future growth and earnings -- its top line amounted to less than 1% of what Amazon generated in the past year.

But thanks to the company's strategic vision, there is little doubt that Shopify can rapidly expand its scale and reach long term. Even so, investors should wait for a pullback from this year's highs before jumping in.

John Mackey, CEO of Whole Foods Market, an Amazon subsidiary, is a member of The Motley Fool’s board of directors. Randi Zuckerberg, a former director of market development and spokeswoman for Facebook and sister to its CEO, Mark Zuckerberg, is a member of The Motley Fool's board of directors. Christine Williams has no position in any of the stocks mentioned. The Motley Fool owns shares of and recommends Amazon, Facebook, Pinterest, and Shopify and recommends the following options: short January 2022 $1940 calls on Amazon and long January 2022 $1920 calls on Amazon. The Motley Fool has a disclosure policy.