Walt Disney (NYSE:DIS) and Roku (NASDAQ:ROKU) are two of the best stocks to consider in the digital entertainment space. Disney has the advantage of brand power through content ownership. Its ability to monetize its wholly owned intellectual property through Disney+ should provide a boost for Disney stock going forward.

On the other side, Roku has posted impressive growth rates lately by providing millions of users the convenience of accessing several streaming services on one platform.

Let's compare the investment cases to determine which stock is the better buy. 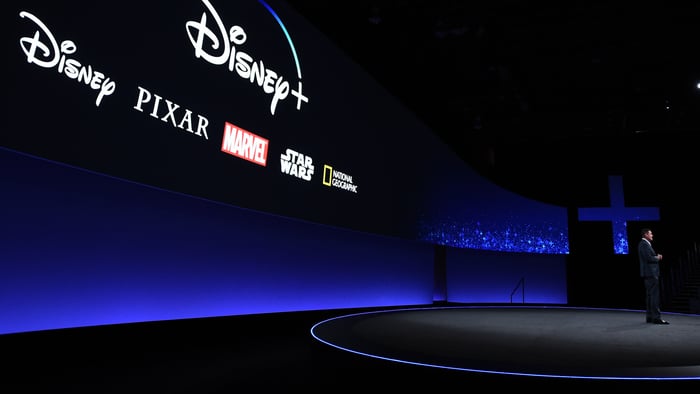 Disney looks ahead to its digital future

Disney's revenue and profits have crashed this year, primarily from theme park closures in the second half of fiscal 2020. However, the disruption caused by the pandemic may come to an end soon, as Pfizer and Moderna have both announced vaccines that appear to be highly effective in preventing COVID-19. That is good news for Disney's theme parks that either have been closed or operating at limited capacity since March.

Meanwhile, Disney+ is growing rapidly, ending fiscal 2020 with 73 million subscribers. Streaming is crucial for the future growth of Disney's empire. Disney+ gives the company a new monetization channel for its entertainment properties, and management is moving quickly to capitalize on its success.

In October, Disney announced a restructuring of its media and entertainment businesses to fast-track the content creation process. This comes after Disney sent two blockbuster films directly to Disney+ during the pandemic, Mulan and the film adaption of the Broadway hit Hamilton.

While these direct releases will likely prove to be one-offs once theaters are back to normal business operations, it gives Disney valuable data insights to understand how direct releases on Disney+ can impact subscriber growth, as well as what price subscribers are willing to pay to see potential blockbuster films when and where they want. Disney offered the premier release of Mulan at $29.99, and management was very pleased with the results.

Moreover, Disney likely has substantial untapped pricing power. At $6.99 per month, Disney+ is far less expensive than many of the alternatives, and this opens the door for future price increases. Disney has over 110 million subscribers across Disney+, Hulu, and ESPN+. Streaming services will grow to be worth a substantial portion of Disney's business over the long term, which is a key reason to consider buying shares.

Still, Disney may have a hard time keeping up with the growth at Roku. 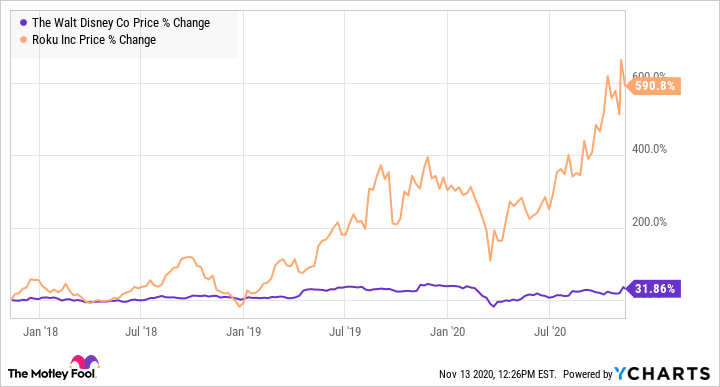 Roku stock has delivered a return of 590% over the last three years. It has quickly emerged as a top streaming distributor, with 46 million active accounts. Its ability to monetize those users with advertising, subscriptions, and transaction video on demand has sent revenue soaring in recent years.

With more people looking for entertainment at home, growth accelerated this year, with total revenue up 73% year over year in the third quarter. But Roku was still a fast-growing business before the pandemic, with revenue up 52% in 2019.

About a third of revenue comes from sales of Roku players, while the balance comes from advertising, subscriptions to third-party services, and other purchases. Roku saw platform revenue jump 78% year over year in the third quarter, as advertising continues to shift from linear TV to streaming platforms.

The growth of digital advertising is one of the main reasons to consider buying shares of Roku. The company believes that someday all TV content will be streamed, so it has centered its business strategy to take advantage of this trend. We're clearly headed in that direction, given the emergence of new streaming services recently.

Roku stock dipped following the announcement of Pfizer's vaccine, as investors anticipate a moderation in growth once the vaccine is available. While it's reasonable to expect growth to decelerate at some point, digital entertainment is a megatrend, and Roku has several opportunities to keep the momentum going.

One is international expansion, and the company recently launched the Roku Express player in Brazil. It also has a relationship with major TV brands that license the Roku operating system, which is a significant driver of user growth. In fact, 1-in-3 TVs sold in the U.S. in 2019 were equipped with Roku.

What's more, Roku's growing scale makes it a valuable partner for content distributors, including Disney, Netflix, and Apple, among several other services. The company is also winning content deals to drive engagement with The Roku Channel, which offers free ad-supported premium content and is growing its audience rapidly.

Roku is well-positioned for the future of entertainment, but investors will have to be willing to pay up for this one. The company is investing heavily in growth, so it hasn't generated a meaningful profit. Looking at the price-to-sales ratio, the shares trade at a high multiple of 17, which is much higher than pure-play streaming stocks like Netflix and China's iQiyi.

On the other hand, Roku's robust revenue growth gives it a better chance to outperform than Disney. Disney will be slowed down in the future by its legacy cable and TV networks that comprised 35% of total revenue in fiscal 2019.

Furthermore, Disney's parks, experiences, and products segment is not a fast-growing business either. Media networks and theme parks are single-digit growing businesses at best. The combination of these segments totals more than half of Disney's business.

Roku has the technology and relationships with TV manufacturers and content providers to remain a great growth stock. Disney is a great brand and will be around for a long time, but Roku is serving a booming market and has gained a large user base to become a valuable partner for top streaming services. I would buy Roku instead of Disney today.