Right now, a massive green wave is sweeping across the U.S. As more states opt to legalize recreational and medical marijuana, people all across the country have called for legalization in other states and at the federal level. After Montana, Arizona, New Jersey, and South Dakota voters chose to legalize adult use recreational marijuana on Election Day, other leaders (including Virginia Governor Ralph Northam) have indicated their intent to introduce legalization legislation in the near future. Over the next decade, the U.S. pot market will likely grow at a rate of 20% or more, and may be worth as much as $100 billion if the drug is fully legalized at the federal level.

Such a market opportunity has attracted significant interest from investors, especially after the 2020 election. Today, let's look at why two cannabis sector players -- a hemp cannabidiol (CBD) oil company and a high-flying marijuana grower -- have the potential to make investors wealthy in the coming years. 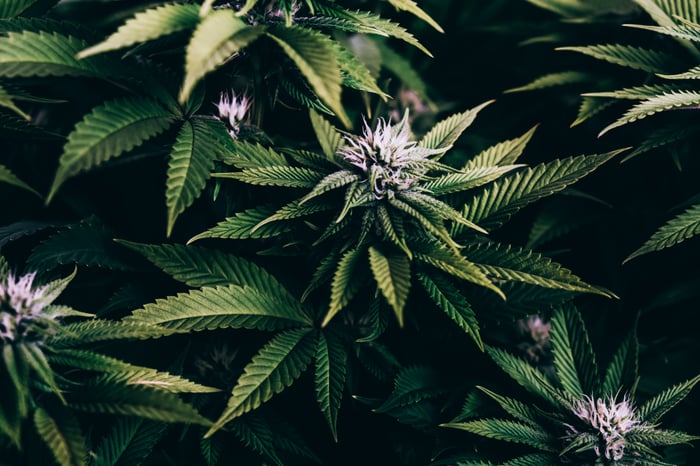 In terms of product ranking, brand loyalty, and awareness, Charlotte's Web Holdings (OTC:CWBHF) (TSX:CWEB) is the industry leader in producing CBD oils across North America. After a devastating few months of lockdowns and quarantine measures that forced its product carriers to close retail stores, Charlotte's Web's financials are finally picking up.

Charlotte's Web currently sells its CBD oils across 22,000 retail locations throughout the U.S. and Canada. The company added more than 1,000 new storefronts in Q3 2020, including many natural foods retailers and pet stores. During the third quarter of 2020 ending Sept. 30, the company's revenue grew by 0.4% year over year and 17% from the second quarter of 2020, to $25.2 million. At the same time, its gross profits declined slightly year over year to $15.2 million from $17.9 million. The company recorded a pre-tax loss of $6.5 million during the quarter.

Right now, one of the company's fastest-growing subsidiaries is Abacus Health. Abacus Health generated $2.5 million in revenue in the quarter via sales of its cannabis-derived capsules, tinctures, gummies, pet CBD, and topical pharmaceutical creams. The subsidiary now accounts for 17% of Charlotte's Web sales, up from 8% a quarter earlier. More than 16,000 health professionals have access to Abacus Health's brands of medical cannabis products.

The industry leader is poised to reap the benefits from a fast-growing U.S. CBD industry, which will likely grow from $1.2 billion last year to $16 billion by 2025. In addition, the company has no debt whatsoever and over $65.9 million in cash and equivalents, giving it ample liquidity for expansion efforts.

The stock is trading at a fair valuation of 5.4 times sales and 2.2 times book value, and I expect the stock to rally sharply should sales of its CBD oils return to pre-pandemic levels. Last year, the company's revenue grew by over 36% year over year.

Green Thumb Industries (OTC:GTBIF) (CNSX:GTII) is one of the largest cannabis producers in the nation, operating 49 stores across 10 states, with the potential to serve 45% of Americans. In its Q3 2020 earnings release (for the quarter ending Sept. 30), the company disclosed that it grew its revenue by an astonishing 131.% year over year to $157.1 million. At the same time, Green Thumb managed to achieve a positive net income of $9.6 million for the first time, compared to a net loss of $12.9 million in the same time last year.

That's not all: The company achieved these results based on sales of just six consumer marijuana brands of vapes, pre-rolls, edibles, CBD, medical marijuana, and extracts. Right now, Green Thumb also has a great deal of capital to expand, with minimal debt due in the next 12 months and a cash balance of $78.1 million.

For the full 2020 fiscal year, the company expects to generate over $500 million in revenue, which is a huge increase compared to approximately $200 million in sales it brought in last year. Green Thumb stock is surprisingly inexpensive at 9.5 times sales and five times book value for a company that is growing at triple-digit percentages.

How each could make you millions