PNC Financial Services (NYSE:PNC) grabbed headlines earlier this week when it announced it would be purchasing the U.S. banking operations of Spanish lender Banco Bilbao Vizcaya Argentaria in an $11.6 billion all-cash deal. The news ended months of speculation about which bank PNC would buy after the large Pittsburgh-based regional lender sold a roughly $14 billion stake in BlackRock this May to build capital in order to pursue a big acquisition. But with BBVA USA, PNC is acquiring a banking operation that has struggled, especially in recent years.

So, how will this benefit PNC in the long term? Let's take a look.

BBVA USA has more than $100 billion in assets and a large presence in a number of states, but the division has not performed well when you look at metrics that bank investors value. Even before the coronavirus pandemic sent the banking sector into tailspin, BBVA USA reported an adjusted return on assets -- a measure of how well a company uses its assets to generate profits -- of 0.66% in 2019. Its adjusted return on tangible equity, a measure of the potential returns shareholders can expect on their equity investment, was 7.03% in 2019. Those numbers are certainly nothing to rave about for a bank with over $100 billion in assets. 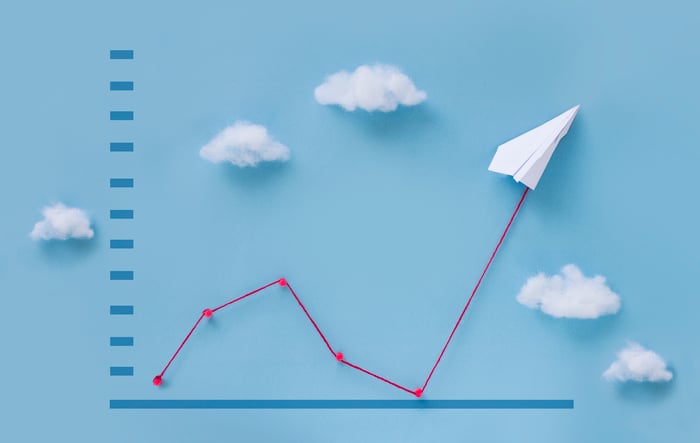 BBVA USA has also been forced to write down the value of its goodwill, an intangible asset that essentially puts a price on aspects of the bank that are hard to value but nonetheless make the franchise more valuable. The bank took a $470 million goodwill impairment charge at the end of 2019 and a $2.2 billion goodwill impairment in the first quarter of 2020. Both of those are taken as one-time writedowns and significantly hurt earnings.

Bank acquisitions often involve a strong bank purchasing a bad bank that it thinks it can fix. After all, most strong-performing banks don't want to sell, or the cost would be so astronomical that it simply wouldn't be worth it for the acquiring bank. BBVA USA gives PNC a lot of strategic pieces that it has been looking for. PNC's CEO, Bill Demchak, has consistently said he wanted a bank that helps PNC build a national retail banking presence that specializes in commercial and industrial (C&I) lending. Not only will the combined entity have more than $560 billion in total assets, but BBVA also comes with 637 branches in many states where PNC does not have a real presence.

Notably, BBVA is the fourth-largest commercial bank in Texas, with more than $44 billion in deposits. Texas is an incredibly valuable banking market because it has the fastest-growing population in the country. BBVA USA also has a significant presence in Alabama, Florida, Arizona, and California in terms. And at a quick glance, BBVA's deposit franchise looks OK, with 31% of its deposits from non-interest-bearing sources. Additionally, more than 40% of its loan book is C&I loans, which is similar to PNC's loan book.

Now what PNC needs to do is take its successful approach and apply it across BBVA's geographic footprint and service model, an area where Demchak says he sees lots of room for improvement. Here's what Demchak pointed out on the conference call following the announcement of the deal:

Demchak also noted on the call that PNC will be able to bring its fee-based products and cross sell to BBVA's corporate client base, a strategy it has executed well in other expansion markets. Other opportunities PNC sees is the ability to eliminate 35% of BBVA USA's expense base, and increase the pro-forma earnings of the company by 21% in 2022. Demchak added the 21% number does not really factor in the potential revenue synergies, either.

The case for buying BBVA seems to align with Demchak's aspirations for an acquisition. But PNC is essentially swapping its steady and passive BlackRock investment for a fixer-upper in BBVA. PNC basically used all of its proceeds from the BlackRock sale to purchase BBVA USA, and the new addition essentially returns PNC to the position it was in prior to the sale, when you look at the bank's tangible book value per share and capital ratios.

Now, PNC must execute. This is not your traditional bank acquisition, in the sense that the 35% in cost savings from BBVA is not coming from traditional branch closures -- the two banks have very little overlap. PNC is also planning a large-scale technology integration in which it will put BBVA on the same platforms it is using. So, the integration process and some of the targets PNC has laid out do not look simple by any means.

But there is no reason to suggest that PNC won't be able to achieve its goals. Its last big acquisition was similar in the sense that it acquired most of the U.S. banking operations from the Royal Bank of Canada. After announcing the deal, PNC achieved 90% of planned cost savings within the first two and a half months. Shares of PNC jumped about 3% on Monday after the deal was announced, so it seems like the market sees the potential behind the acquisition. Now, it needs to see PNC execute on its promises.