The Dow Jones Industrial Average (DJINDICES:^DJI) was up 0.84% at 2:15 p.m. EST Monday as another positive piece of vaccine news propelled the markets higher. AstraZeneca issued a press release announcing that its COVID-19 vaccine showed an average efficacy of 70% across two different dosing regimens. The company also reported that there had been no hospitalizations or severe cases of COVID-19 in participants treated with its vaccine.

Shares of Walmart (NYSE:WMT) and Apple (NASDAQ:AAPL), both pandemic favorites, failed to follow the Dow higher on Monday. Walmart stock was down despite an optimistic holiday retail sales forecast from the National Retail Federation, and Apple stock slumped despite no company-specific news. 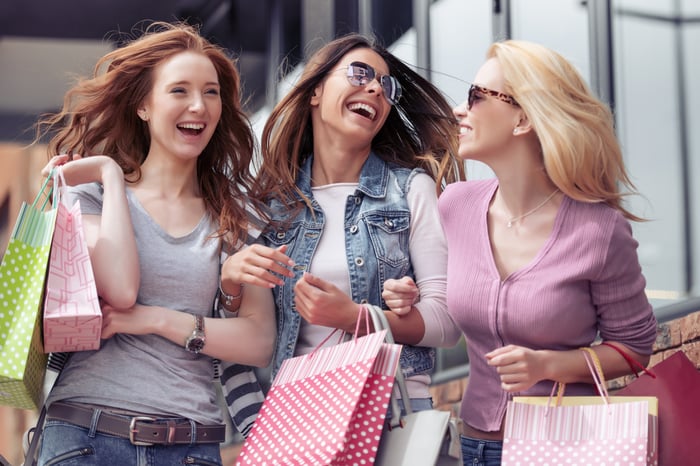 Despite all the uncertainty surrounding the COVID-19 pandemic, the National Retail Federation predicted on Monday that holiday sales during November and December would rise between 3.6% and 5.2% this year. This figure excludes automobile dealers, gas stations, and restaurants. Additionally, NRF expects online and other non-store sales to rise between 20% and 30% this holiday season.

Strong holiday spending from consumers would be good news for Walmart. The mega-retailer reported robust sales growth for the third quarter, but its growth rate did slow from the second quarter as economic stimulus dried up. Walmart's e-commerce business has been booming during the pandemic, and the retailer should be able to capture its fair share of online sales this holiday season.

The NRF is betting that consumers will spend freely despite soaring cases of COVID-19 around the country, and despite strict restrictions being put into place in some areas. "Consumers have experienced a difficult year but will likely spend more than anyone would have expected just a few months ago," said NRF chief economist Jack Kleinhenz.

Kleinhenz continued, "There are risks to the economy if the virus continues to spread, but as long as consumers remain confident and upbeat, they will spend for the holiday season."

The U.S. has been recording close to 200,000 cases of COVID-19 daily in recent days, according to Johns Hopkins University, far higher than either of the previous two peaks. Travel and gatherings for Thanksgiving could cause an acceleration in cases in the coming weeks and lead to stricter measures to slow the spread of the virus. On the other hand, recent good news about vaccines could help keep consumers confident despite a worsening pandemic.

Shares of Walmart didn't get a boost from this optimistic retail sales forecast on Monday, with the stock down about 0.2% in the afternoon. Walmart stock has gained about 26% so far this year.

Apple is the Dow's biggest loser

Shares of Apple were being left behind on Monday as tech stocks underperformed. Apple stock was down about 2.4% in the afternoon, putting up the worst performance in the Dow.

There was no company-specific news driving this decline, so it's hard to say exactly why investors were selling off the stock. Valuation could be a concern: While shares of Apple have slumped since peaking a couple months ago, the price-to-earnings ratio is still around 35. That's historically high for Apple, and it's difficult to reconcile with Apple's growth rate. Revenue barely grew at all in Apple's fiscal fourth quarter as iPhone sales plunged, and net income declined.

Going forward, the success of Apple's 5G-enabled iPhone 12 family will help determine how well the stock performs. The phones are pricey, with the base model starting at $799, and it's unclear how much consumers actually care about 5G technology. The state of the economy, consumer confidence, and the fate of additional stimulus legislation will all play a role in determining the success of Apple's latest products.

While Apple stock was down on Monday, shares of the tech giant have soared 56% this year.