Several pot stocks were jumping as of 3:23 p.m. EST on Monday. Village Farms International (NASDAQ:VFF) was the biggest mover, with its shares soaring 16.8%. GrowGeneration (NASDAQ:GRWG) and Canopy Growth (NASDAQ:CGC) were up 5.9% and 4.2%, respectively. Aphria (NASDAQ:APHA) wasn't far behind, with the stock rising 4.1%.

Often when multiple stocks in the same industry deliver solid gains, there's a common catalyst. In this case, though, each of these four marijuana stocks moved higher for different reasons. 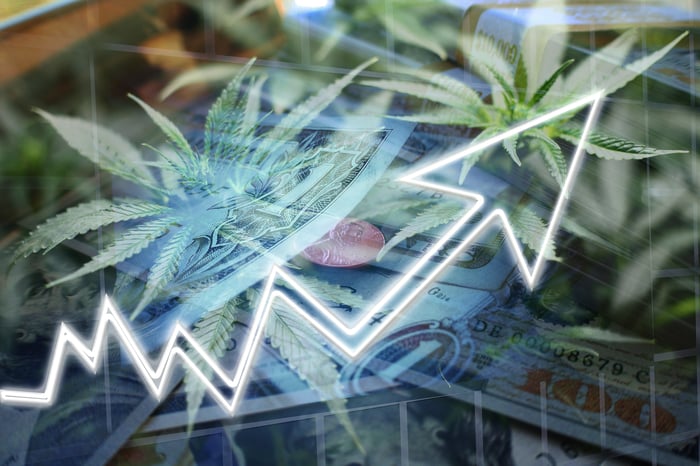 Village Farms announced a couple of positive developments on Monday. The company's Pure Sunfarms joint venture received a license from Health Canada to conduct sensory evaluation testing for cannabis products, including measuring the taste, sight, smell, and touch of the products. Pure Sunfarms also is launching CBD products in Hong Kong for the holiday season.

Canopy Growth announced the completion of a pre-clinical study evaluating the long-term effects of CBD, using Caenorhabditis elegans worms as the subjects. The results from the study were published in the Cannabis and Cannabinoid Research journal.

Neither GrowGeneration nor Aphria had any new developments today. GrowGeneration appears to be enjoying continued momentum from the Election Day results with five states voting to legalize marijuana in some form. Investors also seem to think that Aphria's prospects are better with its acquisition of U.S.-based SweetWater Brewing announced earlier this month.

None of these latest developments are exactly earth-shattering. It remains to be seen just how much of a financial impact the Health Canada sensory evaluation testing license or the CBD product launch in Hong Kong will have for Village Farms. Canopy's pre-clinical CBD study results don't really move the needle much for the company.

There's a pretty good argument to be made that the two stocks with the smaller gains today offer more for investors to get excited about. Aphria's acquisition of SweetWater Brewing could give it a solid launching pad in the U.S. market. The deal could really pay off if federal marijuana laws are changed at some point to clear the way for Aphria to jump into the U.S. cannabis market.

GrowGeneration, though, probably has the greatest growth potential of the group. The legalization of recreational marijuana in Arizona and New Jersey could give the hydroponics and organic gardening retailer big markets in which to further expand.

What really matters is how each of these companies performs in its next quarterly update. The Canadian companies have the biggest challenges but are moving in the right direction. GrowGeneration enjoys the strongest momentum with its sales and profits skyrocketing.