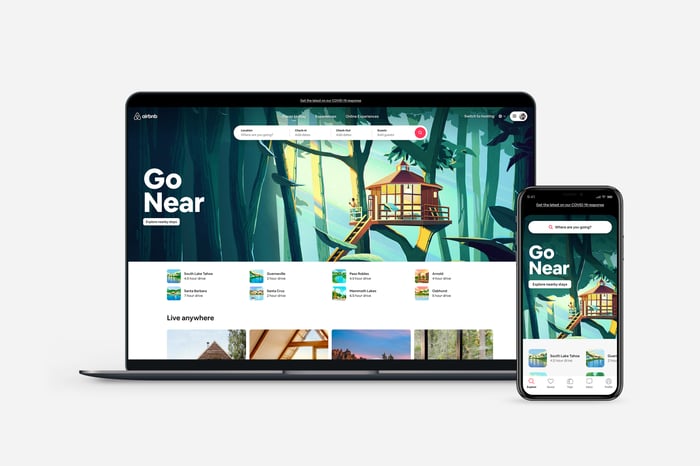 Those numbers suggest Airbnb's IPO will garner a mixed reaction, especially with COVID-19 cases on the rise again. But it's still seeking to raise up to $3 billion, according to Reuters, which would give it a valuation of $30 billion -- or six times last year's sales.

That's a much lower valuation than those of many recent tech IPOs. However, Airbnb was also valued at $31 billion back in 2017 before its private valuation declined to $18 billion earlier this year during the pandemic.

Airbnb seems to be pinning its hopes on an IPO to reverse that decline. But before investors consider chasing this new offering, they should review three of the biggest risk factors highlighted in its prospectus.

Airbnb initially flourished because there weren't any major online platforms for short-term rentals. But as Airbnb grew, its flaws became more apparent.

Its platform disrupted residential communities by attracting short-term guests and tourists. Hosts were sometimes accused of misleading guests with poor accommodations or discriminating against certain races, while some guests were blamed for damaging properties.

Airbnb has been sued by guests and questioned by Congress over questionable listings. But like Uber (NYSE:UBER), it maintains it's just a technology platform that connects people to each other.

Airbnb's ability to thrive in this regulatory gray zone is causing more neighborhood associations to ban short-term rentals, and causing hotels and trade groups to lobby for new laws.

In its filing, Airbnb admits a "wide variety of complex, evolving, and sometimes inconsistent and ambiguous laws and regulations" could "adversely impact" its business. It also warns it "may be difficult or impossible" to "investigate or evaluate laws or regulations in all cities, countries, and regions" worldwide.

Airbnb's growth initially caught many online travel agencies (OTAs) and hotels off guard. But many of these companies subsequently launched similar services in recent years, and Airbnb admits it now operates in a "highly competitive environment."

Over the past two years, Airbnb added more hotel listings to its platform to gradually reduce its dependence on short-term rentals. However, that nascent strategy could also increase its exposure to direct competition from big OTAs and hotel chains.

3. No clear path toward profitability

Airbnb hasn't ever generated a profit, and it warns it "may not be able to achieve profitability." It also points out its adjusted EBITDA and free cash flow have been declining, and that that downward "trend could continue."

Airbnb's lack of profits wouldn't be that troubling if its revenue growth was robust. Unfortunately, Airbnb also warned that its "revenue growth rate has slowed, and we expect it to continue to slow in the future."

Airbnb's decelerating revenue growth and widening losses, along with tighter regulations and increased competition from traditionally profitable OTAs and hotel chains, could dampen the market's enthusiasm for its IPO. The ongoing COVID-19 pandemic, which could worsen throughout the holidays before potentially waning next year with new vaccines, could exacerbate that pain.

Is Airbnb worth buying?

Airbnb's IPO might seem reasonably valued relative to some other recent IPOs, but it's also likely wooing retail investors because private interest in its company dried up during the COVID-19 crisis. Therefore, I doubt Airbnb will fare much better than Uber, which burned eager investors with its busted IPO last year. The two companies clearly face similar problems: tighter regulations, slowing growth, and a glaring lack of profits.

However, Airbnb still enjoys a first-mover's advantage, and its business could stabilize after the pandemic ends, assuming it addresses the regulatory threats, cuts costs, and upgrades its platform to weed out problematic hosts and guests.

When all that happens, Airbnb's stock might be worth buying. But for now, investors should avoid its IPO and stick with other promising growth stocks instead.