If you had the option to get one of two effective coronavirus vaccines, one that costs $10 or one that costs $20, which one would you choose? Now that AstraZeneca (NASDAQ:AZN) is reporting that its candidate AZD1222 may be 90% effective at preventing coronavirus infections, people all over the world could soon face that choice. If approved vaccines are of equal quality, then choosing the cheaper option is easy. However, based on recent interim trial data, the decision could be more complicated once we consider safety and efficacy data.

Compared to the candidate produced by Moderna, AZD1222 could be around 5% less effective on the basis of the clinical trial data disclosed so far. But, AstraZeneca has agreed to keep prices per dose to be in the range of a few dollars, unlike Moderna or Pfizer. Will this low-cost strategy lead it to capture a large market share, or should potential investors shy away? 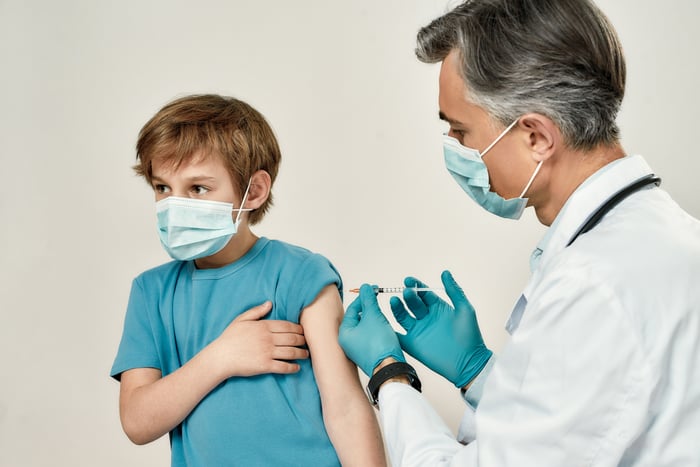 Final figures on vaccine pricing are still in the works. But management from all three potential vaccine victors have dropped clues on their target price ranges. Moderna's vaccine will be the most expensive, at $32 to $37 per dose, and it requires two doses to be effective, which would put its final price at around $65. Pfizer and its collaborator, BioNTech, are aiming at just shy of $20 per dose, and they also require two doses. In contrast, AstraZeneca plans to only charge several bucks per dose, so a full course of treatment could cost less than $10.

Given that AZD1222's efficacy was found to be slightly less impressive than its competitors, this price comparison is not entirely apples to apples. It's true that there might be some segment of the population that would be willing to spend top dollar on the most protective vaccine, even if the difference in efficacy is a mere 5%. On the whole, however, it's hard to believe that healthcare systems deciding which vaccine to purchase would spend much time worrying about relatively minor variations in effectiveness. AstraZeneca's commitment to keeping prices low will ensure that cash-poor hospitals in every corner of the world will be scrambling to procure its vaccine.

AZD1222 is easy to distribute and store, but will it generate a profit anytime soon?

There's one other factor that makes AZD1222 likely to outsell the competition. Unlike Pfizer and Moderna's vaccines, AstraZeneca's can be safely stored in a standard refrigerator. It doesn't need ultra-cold freezers or specialized shipping devices to remain stable. Healthcare systems without ultra-cold infrastructure won't need to purchase anything new or change their operating protocols to deploy the vaccine. This is a major advantage over the other candidates.

The only question remaining is whether a vaccine could generate new profits for the company. Unfortunately for investors, management has explicitly stated that they do not plan to profit from vaccine sales during the pandemic. In this case "during the pandemic" means until at least July 1 of 2021, per the company's fine print. There's a very high chance that the coronavirus will still be around at that point, so it's probable that vaccine sales will continue to be high, especially if the immunity acquired from the vaccine is short-lived.

Assuming that the vaccine is currently priced at its manufacturing costs for ethical reasons, AstraZeneca could theoretically increase its price per dose by a couple of dollars, and it would still be the cheapest on the market by a large amount. If AstraZeneca did decide to do this, investors should expect the price hike shortly after July of the coming year. There's little reason to believe that it would harm sales volume, which by then could be in the hundreds of millions of doses per quarter. Likewise, once the candidate is widely distributed, more will be known about its side effects and other characteristics, so the risks and unknowns will fall.

This means that the soonest investors could see a beneficial impact to the company's earnings is in the third quarter of 2021, which will be reported in early November of next year. Buying stock shortly beforehand is the best way to get exposure to AstraZeneca's vaccine profits. Buying it now could also be prudent, as the market's reaction to the vaccine announcement has put the stock at a slight discount. But, keep in mind that a lot could change between now and then.

If the clinical data continue to show that AZD1222 is highly effective, it's sure to be a market leader. But at the moment, no single manufacturer has been given the green light from regulatory authorities to proceed with sales, so sales timelines and market dominance could easily shift.