It was only a little over five years ago that Canopy Growth, the biggest pot stock based on market cap, was valued at close to $60 million. Today, Canopy's market cap tops $9 billion. There are at least half a dozen other pure-play cannabis stocks with market caps of $1 billion or more.

Some investors might feel like they missed out on the early boom for marijuana stocks. Don't worry; the cannabis industry still has plenty of room to grow. If you really like getting in on the ground floor of a hot new market, though, there's another angle you might want to explore: psychedelic stocks. 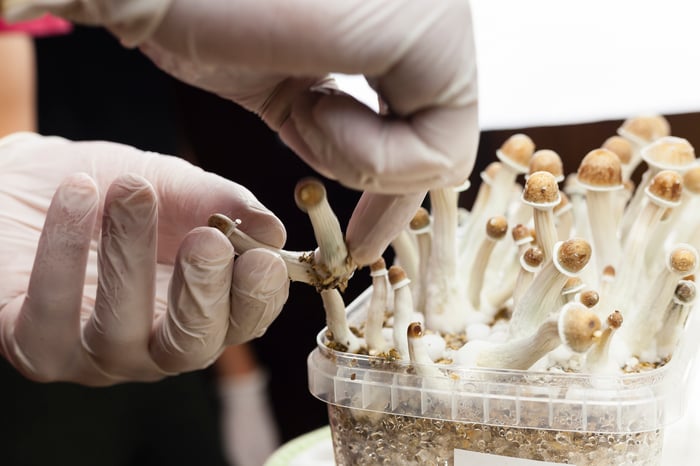 Psychedelic drugs have long been used recreationally and, for the most part, illegally. The potential medical uses for hallucinogens like LSD and mescaline have also attracted scientific attention over the last century.

Today, the focus is on psilocybin, a psychoactive chemical found in certain types of mushrooms. Like cannabis, psilocybin is currently a Schedule I substance under the Controlled Substances Act. This makes it illegal in the U.S. at the federal level. The definition of Schedule I drugs states that they have high potential for abuse and no currently accepted medical use.

Yet times are changing. Research is exploring the use of psilocybin as a treatment for multiple disorders. Major depressive disorder, panic disorder, and opioid addiction are just a few of the possible indications for the hallucinogen.

Data Bridge Market Research projects that the psychedelic drug market will reach $6.85 billion by 2027. That level reflects a 16.3% compound annual growth rate (CAGR). It's important to note that the market researcher's estimate was made before residents of Oregon voted on Nov. 3, 2020, to legalize psilocybin for mental health treatment at licensed centers.

Several companies are developing psychedelic drugs, but most are small players for now. U.K.-based Compass Pathways (NASDAQ:CMPS) is the biggest in the group of biotechs focused on psychedelic drugs.

Compass conducted its initial public offering (IPO) in September. Its market cap quickly vaulted above $1 billion. The company is currently evaluating its lead pipeline candidate, COMP360 psilocybin therapy, in a phase 2b study for treatment-resistant depression.

Mind Medicine (NASDAQ:MNMD) has a market cap of around $435 million. The company hopes to soon move forward with a phase 2a study of LDS microdoses in treating adult attention deficit hyperactivity disorder (ADHD). This study will be conducted in Switzerland and the Netherlands. Mind Medicine has also filed for Food and Drug Administration authorization to begin a phase 2b study of its LSD therapy in treating anxiety disorders.

All other companies developing experimental psychedelic therapies are much smaller than Compass Pathways. Cybin is a case in point. The stock currently has a market cap of a little over $100 million. Cybin is developing a psilocybin therapeutic candidate targeting major depressive disorder.

But while Cybin is small, it's attracting talent from big drugmakers. The company hired Doug Drysdale as CEO in September. Drysdale was head of mergers and acquisitions at Actavis (now owned by Teva Pharmaceutical). He also served as CEO of two drugmakers, Pernix Therapeutics and Tedor Pharma, before joining Cybin.

An early market to closely watch

Psychedelic stocks won't have as big of a market opportunity as cannabis stocks do. Cannabis is legal nationally in Canada and is legal in some form in 35 U.S. states. Psychedelic drugs are much more heavily restricted. The companies with the greatest opportunities in the psychedelic market are pursuing the FDA approval path, similar to what GW Pharmaceuticals did with its CBD drug Epidiolex.

Editor's note: A previous version of this article stated that Cybin's market cap was under $15 million. This figure was based on source data that was incorrect. The Fool regrets the error.