Shares of some electric-vehicle (EV) stocks are taking a breather today after sharp rallies in recent weeks. Shares of Chinese automaker Li Auto (NASDAQ:LI) are down 6% as of 11:45 a.m. EST. Shares of EV charging station suppliers Blink Charging (NASDAQ:BLNK) and Switchback Energy Acquisition (NYSE:SBE) are dropping 8% and 3%, respectively.

Even with the drops, shares of these three companies have risen between 140% and 240% in just the past three months. 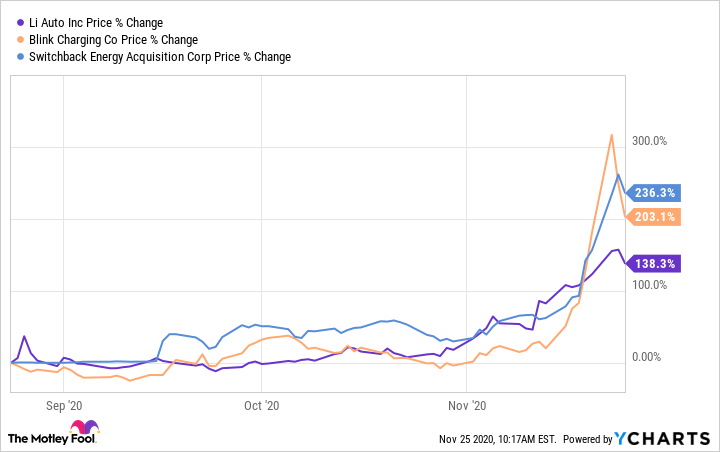 Now it seems some news items are contributing to a reversal of the trend.

With the rise in electric-vehicle sales comes the need for more charging stations. 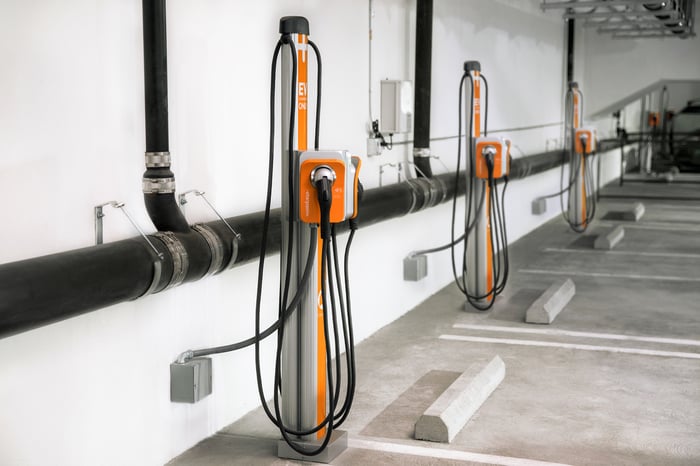 The stocks of Blink Charging and Switchback Energy -- which is merging with charging station-maker ChargePoint -- have benefited from that need. But earlier this week, Blink Charging was the target of a negative report by short-seller Citron Research.

Citron's blasting of Blink Charging could actually be seen as a positive for Switchback Energy. Once the special purpose acquisition company (SPAC) merges with ChargePoint, the new company will be the leader in North American EV charging, with plans to expand its footprint in Europe. ChargePoint says it has 73% market share in North America for charging networks that use 240-volt power -- seven times more powerful than its nearest competitor.

But shares of Switchback Energy have been on a tear, as the above graph shows, so it's not surprising to see the stock drop along with Blink Charging's.

The reversal in the uptrend in Li Auto shares is also partly a breather from the sharp rally over recent weeks. But there's also another headwind today. China appears to be ramping up government regulation in the EV sector. China's National Development and Reform Commission (NDRC) is asking local governments to investigate new energy vehicle (NEV) projects, according to a Reuters report.

Investors in the EV sector have contributed to some exuberance recently. It's not surprising that when some negative opinions or news comes out the rally would stall. Like with any investment, the fundamentals of the underlying business are what matter in the long run. Investors should be sure to understand those fundamentals when putting money to work in any of these names.