If you're a retiree in search of consistent and recurring income, you don't want to see volatility from your investments. Having stable, low-volatility dividend stocks in your portfolio is important to ensure that you can just buy stocks and forget about them, without worrying about wild swings in their value.

That's precisely why Pfizer (NYSE:PFE), J.M. Smucker (NYSE:SJM), and Duke Energy (NYSE:DUK) could be great options for retirees today. With dividend yields that pay more than the typical stock on the S&P 500 and long histories behind them, these income-generating investments can be pillars for your portfolio for many years.

Pfizer's COVID-19 vaccine candidate, which it developed with BioNTech, has shown 95% efficacy, and the two companies have applied for emergency use authorization for the drug. It may come as a surprise, therefore, that on a year-to-date basis, Pfizer's stock is down 2% while the S&P 500 is up 12%.

Although the vaccine would likely generate billions in revenue for Pfizer, this is a company that reported $51.8 billion in revenue last year and $16.3 billion in profit. A successful vaccine won't mean as much for the company as it would for a company like Moderna, which doesn't have any other products to fall back on. 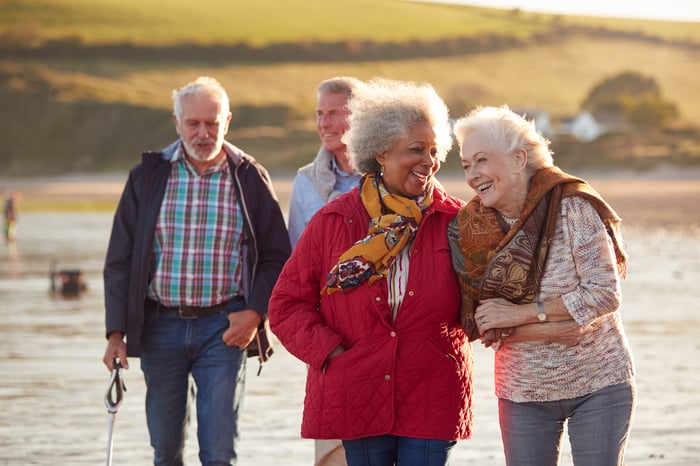 In each of the past 10 years, Pfizer has posted a profit margin of at least 12%, and its sales haven't been lower than $48 billion. Its top line will be a bit lower moving forward now that its Upjohn business has been spun off to form a new company with Mylan, called Viatris. However, the segment wasn't growing this year and at $5.9 billion in sales through the first nine months of the year, it accounted for approximately 17% of Pfizer's total. Its loss won't cripple the New York-based business, by any means.

Today, Pfizer pays its shareholders a quarterly dividend of $0.38, which equates to a yield of 4.1% annually. This is far better than the typical 2% payout you can normally expect from the S&P 500. If you own $25,000 in shares of Pfizer stock, you'd be earning about $1,025 every year in dividends.

The healthcare stock may not generate sky-high returns, but it makes up for that with stability, as its beta is 0.64. Beta measures how volatile a stock is in relation to the markets, and a value of 1 indicates that a stock generally moves in unison with the markets. A value of less than that indicates it doesn't track the markets very strongly. The lower the beta, the lower the volatility.

With a low beta, a solid payout, and a strong profit-generating business, Pfizer is a top stock that all retirees should consider putting in their portfolios.

Ohio-based J.M. Smucker is another great, stable buy with an even lower beta value than Pfizer, at 0.24. With many popular consumer brands in its portfolio, including Smucker's and Folgers, the company's products are staples in groceries and supermarkets everywhere.

On Nov. 24, Smucker released its results for the second quarter, for the period ending Oct. 31. During that time, the company reported net sales of $76.2 million, which were up 4% from the same period last year. The company is optimistic in its outlook and announced it would be raising guidance, forecasting full-year sales to rise between 1% and 2%. Previously, it was anticipating sales growth to fall within a range of 0% and 1%.

Its sales in its coffee segment grew 9% in Q3, while retail consumer foods rose by 12%. The one area where it struggled was in international and "away from home" (products for offices, etc.), where revenue fell 10%. This isn't surprising, as many businesses are struggling because people are staying indoors during the pandemic.

Overall, it's another profitable quarter, which is something investors are used to by now -- J.M. Smucker has reported a profit in each of the past 10 years.

Today, the stock pays investors a quarterly dividend of $0.90 that yields over 3% annually. With a $25,000 investment, you would be earning approximately $750 in annual dividend income. With a business that's doing well during the pandemic, J.M. Smucker is proving to investors why it can be a stable buy even during difficult times, making it an appealing investment to hold for retirees.

A third stock to round out your portfolio is Duke Energy, which provides essential services for its nearly 10 million customers nationwide -- 7.8 million through its electric utility segment, which is active in six states, and 1.6 million through its gas utilities division, which is in five states.

While you won't likely see crazy growth from this stock, it is another consistent performer. Because it's a utility business, revenue will largely be recurring, with few big spikes or declines in sales or profits. Duke's sales in the past seven years have been within a narrow range of $22.7 million and $25.1 million; the company has also netted a profit in each one of those years.

With a beta value averaging 0.23 over the past five years, this is an even less volatile stock than J.M. Smucker. And it's paying a better dividend yield of 4.1%, which is similar to Pfizer's current payout.

Duke's strong and stable business makes it another ideal investment that retirees can rely on for consistent dividend income, where fluctuations should be even less frequent than they are in the consumer goods or healthcare industries.

Buy all three to also benefit from diversification

You could just buy one of these dividend stocks, but to further secure your savings, you may want to consider investing in all three, since doing so will help diversify your portfolio and further bring down your overall risk. Here's a quick look at how the stocks have performed this year: 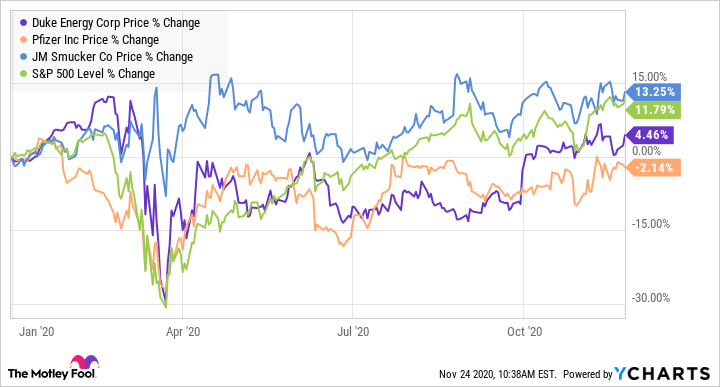 Although Pfizer and Duke Energy are underperforming the S&P 500, the value for retirees is in the dividend income they produce. Together, these three stocks can provide a good base for your portfolio.

With these investments, you can just collect dividend income and not worry about much else. Ideally, you'd hope for some good returns, but unless you're selling the stocks soon, it's not all that important how they're performing -- especially not in one given year. As long-term investments come, these are some of the better stocks you can own today.