Please ensure Javascript is enabled for purposes of website accessibility
Free Article Join Over 1 Million Premium Members And Get More In-Depth Stock Guidance and Research
By Jason Hawthorne - Nov 27, 2020 at 6:45AM

The number of households that own a pet is expected to increase from 68 million to 71 million by the end of this year. About 94% of the pet-owning households in the U.S. own either a dog or cat. That's good news for companies that serve the market for pet supplies like food, medicine, and insurance.

Chewy ( CHWY -5.71% ), IDEXX Laboratories ( IDXX -3.13% ), and Lemonade ( LMND -7.47% ) are three companies benefiting from the trend of increased pet ownership in different ways. It's no wonder Americans spent a record $96 billion on pet products and services in 2019 given that 77% of dog and cat owners viewing their fur babies as family members. There is no question that spending record will be broken in 2020 as the number of pet-owning households increases. Let's look at how that growth will benefit these three companies. 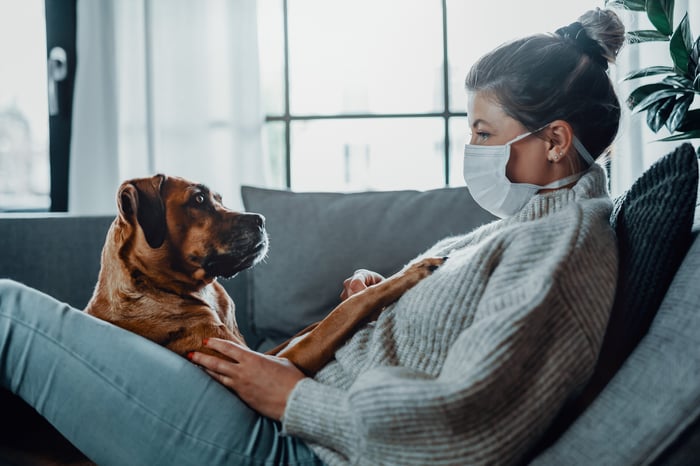 The largest spending category, with 2019 sales of $37 billion, is pet food and treats. I can personally attest to the broad selection of foods -- including those for special diets -- Chewy offers. Chewy has also made a push into the pet pharmacy and telehealth segments. These are new paths for growth from when the company was acquired by Petsmart in 2017 and subsequently spun off in an IPO in June 2019. Petsmart has been trying to separate from Chewy in order to protect the fast-growing retail business from its creditors, but it hasn't yet been able to do it.

It's obvious why shareholders would want the online pet business unencumbered. In the most recently reported quarter ending Aug. 2, management reported sales of $1.7 billion -- a 47% increase over the previous year. The company set a record for sales, new customer additions, and had its second consecutive quarter of positive EBITDA -- earnings before interest, taxes, depreciation and amortization.

Although you wouldn't think of a company selling pet food as having recurring revenue, 68% of the company's sales last quarter were from auto-ship customers. The company also added more new customers in the first two quarters of 2020 than in all of 2019. To support this growth, two new fulfillment centers were licensed to ship nationwide. Management's ability to scale up, supporting sales growth and new customers with additional facilities, is impressive. I expect the pandemic-induced gains to set a new, higher baseline of sales for Chewy that will continue to reward investors in the coming years. However, at a $28.5 billion market cap, the company will have to continue finding new growth opportunities to support the lofty valuation.

IDEXX Laboratories has the benefit of having a foothold in multiple categories of Americans' pet spending. While the company makes diagnostic equipment and software for veterinary offices, they also make specially formulated food for pets with dietary restrictions. In addition to the spending on food, Americans spent $29 billion on veterinary services and products in 2019. Anyone who has taken a four-legged family member to the vet knows that the testing services aren't cheap. Not to be pigeonholed, IDEXX also serves the livestock and equine markets.

The increase in pet ownership in 2020 showed up in the company's most recent quarter ending Sep. 30. The $772 million in reported sales was 19% higher than the same quarter last year, while earnings per share (EPS) came in 36% higher. That is a sharp recovery from the 3% sales increase in the second quarter, as veterinary offices struggled to see as many furry patients.

As the world normalizes, I expect IDEXX to return to the 7% to 12% annual growth it has demonstrated for the past decade. The company is never cheap, typically trading for 40 to 50 times earnings. With a current price-to-earnings (P/E) ratio of 81, I am looking for an opportunity to buy shares closer to the historical valuation.

While not quite the nearly $30 billion Americans spend on both vet services and food and treats, spending on pet services is still substantial at $10 billion. This category contains boarding, grooming, training, and insurance. It's that last category that has Lemonade prospering from the jump in pet ownership. Lemonade, an insurer that uses artificial intelligence and policy transparency to differentiate itself,  has previously focused on writing homeowners and renters insurance policies. In the quarter that ended June 30, the company launched a pet insurance business that seems to be doing great so far.

For one, the pet insurance business has turned out to be a great lead generator for other insurance products. Nearly 40% of the pet policies were sold to people who had no previous relationship with Lemonade. Existing policyholders that signed on for pet insurance saw their premiums increase fourfold with no additional cost to the company.

Lemonade was a hot initial public offering when it made its debut in July, jumping 139% on the first day. Investors were excited by how efficiently the company could process claims with artificial intelligence, as well as the intuitive, fully online experience. I'm impressed by those traits as well. More importantly, I think the company may have just struck gold as it discovers a lucrative insurance niche with no legacy provider to unseat, just as Americans boost their ownership of pets.

Will Oscar Be the Next Lemonade?