Please ensure Javascript is enabled for purposes of website accessibility
Free Article Join Over 1 Million Premium Members And Get More In-Depth Stock Guidance and Research
By Will Healy - Nov 28, 2020 at 6:16AM

These companies offer more potential than the stock price might indicate.

Low-cost stocks typically trade at depressed levels for a reason. In many cases, such prices indicate deep financial troubles for a company. Nonetheless, investors should remember that some now-prominent stocks such as Advanced Micro Devices or NIO were once penny stocks. So not every company should necessarily be written off for a low stock price.

To recover from such prices, a company must show substantial growth potential. Antares Pharma ( ATRS -1.82% ), GreenSky ( GSKY -0.78% ), and Nokia ( NOK 1.26% ) are three such businesses with considerable capacity to orchestrate such a turnaround. 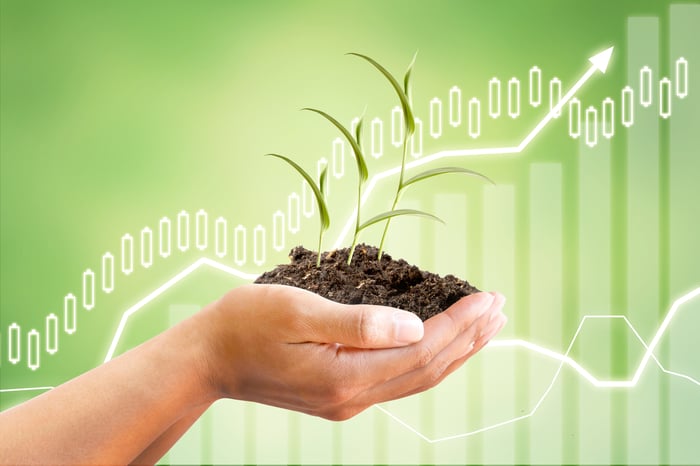 Here's a look at the share prices of each company this year. 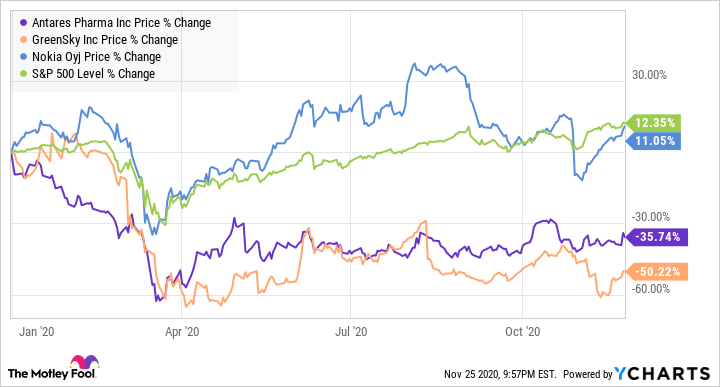 Antares develops self-injectable pharmaceutical products offering treatments in the fields of rheumatology, urology, endocrinology, and neurology. For now, its highest-profile treatment is Xyosted, a self-injectable testosterone replacement therapy designed for use at home. It also produces a generic epinephrine injection. Additionally, in the U.S., it licenses Nocdurna, a treatment for frequent urination, from Ferring Pharmaceuticals.

Thanks in part to the 129% growth in prescriptions for Xyosted, expanded use of these products has helped boost the top and bottom lines. In the latest quarter, revenue increased by 17%, while income rose by 379%.

Though that amounts to earnings per share of only $0.03, it is a profit nonetheless. Moreover, analysts predict a net income of $0.06 per share for this year and $0.25 per share in fiscal 2021. Antares has traded at penny-stock levels for more than 20 years, so this growth could serve as a long-awaited catalyst.

For now, the stock sells for just less than $3 per share as of the time of this writing. If the company can come close to meeting analyst forecasts, it could finally see a long-awaited breakout.

GreenSky is a fintech company serving banks and merchants. It provides the financial infrastructure to help consumers finance loans for home improvement, healthcare, and other expenses. To date, GreenSky has helped over 16,000 active merchants fund more than $26 billion in loans.

Admittedly, GreenSky has seen little in the way of blue skies. Since the stock debuted at $23 per share in 2018, GreenSky has lost more than 80% of its value. The share price plummeted early this year, and there was no subsequent recovery. It dropped again following the latest quarterly report as both revenue and earnings per share failed to meet expectations.

However, following this decline, two company executives each purchased more than 1.1 million shares on the open market, showing that they think the company is undervalued at this price. And news of a potential vaccine offers hope that the world will move on from the COVID-19 pandemic -- which should boost GreenSky's fortunes along with many others.

Finally, while earnings were down an estimated 80% this year, analysts expect them to rise by 250% in 2021. Although that will not bring a full recovery, it could bring some long-awaited relief to long-suffering GreenSky stockholders.

Nokia is a telecom giant that continues to redefine itself. As one of the major 5G equipment providers, it holds tremendous potential for growth. Nonetheless, the company's recent performance has given investors few reasons to cheer.

In September, Nokia lost part of a lucrative 5G contract with Verizon Communications, which opted to use Samsung equipment instead. More recently, it fell 20% in late October after announcing that it had earned a slightly smaller profit than Wall Street analysts had anticipated. The company earned four euro cents ($0.05) per share in the latest quarter, a decline of about 7% from the previous year.

However, Nokia could again give investors a reason to pay attention. It trades at a forward P/E ratio of 16, when peers such as T-Mobile are valued much higher with forward P/Es in the 20s and 30s. Moreover, the company brought back Pekka Lundmark, who had previously held multiple executive positions at Nokia, as the CEO. Lundmark seems determined to bring a long-term focus back to the company, and he expects financial performance to stabilize in 2021, which could usher in a long-overdue recovery for Nokia.

Why Is This Fast-Growing Biotech So Undervalued?