If you are looking for dividends today, then you've likely taken a gander at the out-of-favor energy sector. Despite recent rallies, it's still a relatively unloved space offering investors high yields. For example, Magellan Midstream Partners (NYSE:MMP) and Kinder Morgan (NYSE:KMI) have yields of 9.3% and 7.1%, respectively. Picking between these two, however, isn't as easy as choosing the higher yield. Here's why.

Of these two midstream players, Kinder Morgan is the larger and more diverse name. For starters it has a market cap of nearly $34 billion, versus Magellan's roughly $10 billion. Then there's the assets it owns, which includes 83,000 miles of pipelines and 147 terminals. It lays claim to being the largest "energy infrastructure firm" in the S&P 500 Index. Magellan's footprint is far more modest, with roughly 12,000 miles of pipes and nearly 80 terminals. 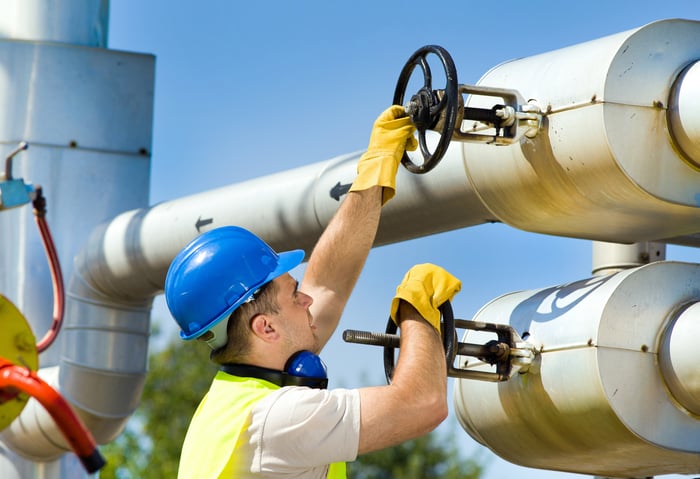 While Kinder Morgan is clearly the larger firm, it wouldn't be fair to call Magellan a small fry. It has a long and respected history in the energy sector, it's just closer to the middle of the pack than the front when it comes to scale. That gives Kinder Morgan some advantages when it comes to capital spending plans (more on this in a second) and operating costs in a business where scale does confer some benefits.

Being the larger company, you might expect Kinder Morgan to have more debt on an absolute basis. However, it also has more debt on a relative basis, as well. The company's debt to EBITDA ratio is around 5.7 times today. That's toward the high end of the midstream sector. Magellan's debt to EBITDA ratio is a much more reasonable 3.4 times, which is toward the low end of the industry. This is the norm for both companies, with Kinder Morgan historically making use of more leverage than conservative peers like Magellan, which usually errs on the side of caution with its balance sheet and business approach. That suggests that Magellan is the safer option in some ways.

Indeed, Kinder Morgan's use of leverage became an issue in 2016 when the industry was having a hard time on the capital-raising front. Management basically had to choose between paying the dividend or funding its capital investment plan, with the ultimate choice being to cut the dividend a huge 75%. It has since gotten back on the dividend growth track, but that cut was a shock to many investors -- Kinder Morgan had said it was looking to increase the dividend by as much as 10% just a couple months before the cut.

More recently, the company had been promising a 20% dividend increase in 2020, but instead chose to increase it only 5% because of the economic impacts from efforts to slow the spread of the coronavirus. That's way better than a cut, and even an understandable decision, but investor trust on the dividend front is a big issue here. Master limited partnership Magellan, on the other hand, has increased its distribution every year for two decades. And while it hasn't increased its dividend in 2020, the streak remains alive since this year's total distributions will be higher than last year's due to the four hikes that occurred in 2019. The fly in the ointment here is that management has only committed to sustaining the distribution through the end of the year. 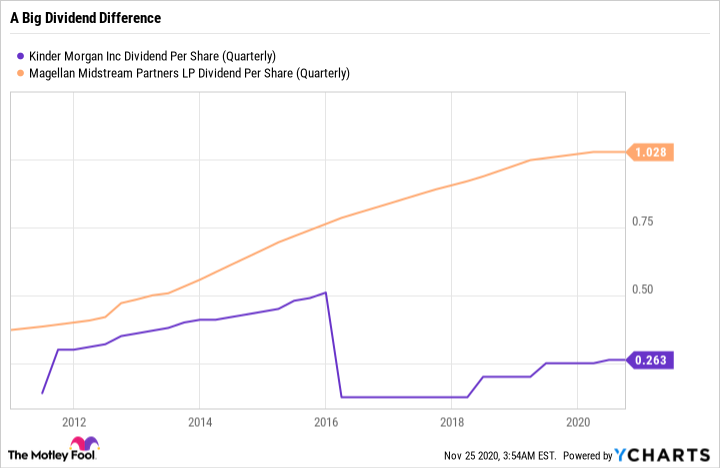 The problem for Magellan is that its distribution coverage is expected to be roughly 1.1 times in 2020. That's not out of line with the partnership's history, but is on the lower side of the industry today. With a relatively modest use of leverage it can probably muddle through without a cut, especially considering it has provided guidance that says it intends to target the same coverage level in 2021. But there's not a whole lot of room for adversity.

Kinder Morgan is at the other end of the spectrum, with dividend coverage of 1.8 times in the third quarter. In fact, management has been clear that the decision to increase the dividend by 5% was about ensuring the dividend's long-term safety -- not a reflection of an inability to raise it. Basically, it doesn't want to end up in a position where it is forced to cut again. That's a good decision, since a second cut would kill any credibility that management has recovered since the first cut.

One of the big issues facing midstream entities today is the steep drop in demand for oil and natural gas, and the products they get turned into. That's resulted in less product moving through midstream assets, and a material reduction in the growth profile of the industry. Magellan, for example, has seen its capital spending decline by more than 50% in 2020 from 2019 levels. In 2021 capital spending will fall even more, with what appears to be little more than maintenance spending -- the company has less than $100 million of projects on tap. Kinder Morgan has $2.6 billion worth of projects through 2023.

This is an industry in which growth comes from adding new assets, so Kinder Morgan definitely has the edge here. But there's more to this story, since growth can come via acquisition as well. With its larger scale, Kinder Morgan is also more likely to be a consolidator than Magellan. In fact, Magellan might end up a target for a larger company, given its strong balance sheet.

Unfortunately, there's no clean answer here for investors picking between Kinder Morgan and Magellan. They both come with notably positives and negatives. However, given its size, dividend coverage, and growth prospects, most investors will probably favor Kinder Morgan. That decision, though, has to be taken with a very large grain of salt because of its 2016 dividend cut. For some, that event, given management's earlier promised to hike the payout, will make management trust too big a question mark to invest. If that's you, then you might want to broaden your search in the midstream space to include Enterprise Product Partners, which doesn't come with the same dividend baggage, has robust distribution coverage, and is just as integral a midstream player as Kinder Morgan.