Please ensure Javascript is enabled for purposes of website accessibility
Free Article Join Over 1 Million Premium Members And Get More In-Depth Stock Guidance and Research
By Beth McKenna - Dec 1, 2020 at 10:00AM

Zoom Video Communications ( ZM 0.13% ) reported powerful fiscal third-quarter 2021 results on Monday after the market close. The videoconferencing specialist's business continued to get a brisk tailwind from the COVID-19 pandemic-driven surge in the number of people working, learning, and socializing from home.

But shares fell 5.1% in Monday's after-hours trading session. The market's initial reaction isn't that unusual for a stock with a sky-high valuation, which means that investor expectations are, likewise, through the roof. Given the stock's incredible gains this year, some investors -- such as short-term traders -- probably decided to take some profits.

In 2020, Zoom stock is up 603% through Monday's regular trading session. The S&P 500 index has returned 14% over this period. Since the company's initial public offering (IPO) in April 2019, its stock has increased in value by more than 13 times.

Below is an overview of Zoom's quarter, along with its guidance for fiscal Q4. 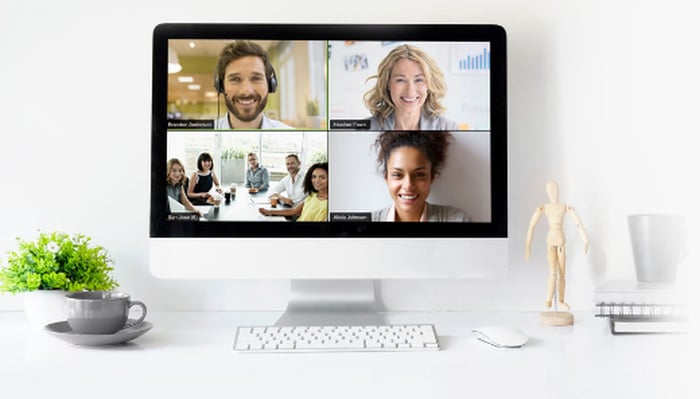 Zoom's quarterly sales soared 367% year over year to $777.2 million. This result crushed the $694 million analysts were expecting, and the company's guidance of $685 million and $690 million. Growth was driven by the addition of new customers and expansion of the services the company provides to existing customers.

Income from operations under generally accepted accounting principles (GAAP) was $192.2 million, up from a loss of $1.7 million in the year-ago quarter. Adjusted for one-time items, operating income came in at $290.8 million, more than 13 times the year-ago-period's result.

Wall Street had been looking for adjusted earnings per share (EPS) of $0.76, as outlined in my earnings preview, so the company easily beat the profit expectation. It also zoomed by its own guidance of $0.73 to $0.74.

The company ended the period with cash and cash equivalents of $1.9 billion.

Going into the report, Wall Street had been modeling for Q4 adjusted EPS of $0.66 on revenue of $730.1 million. So Zoom's outlook on both the top and bottom lines trounced analysts' expectations.

Zoom's fiscal Q3 results were stellar, as is its Q4 guidance.

Long-term investors shouldn't be concerned about the market's somewhat negative reaction during Monday's after-hours trading session. The downward movement in the stock, which was small in the scheme of things, was probably driven by short-term traders.

Could the 4-Day Workweek Solve the Labor Crisis?