Please ensure Javascript is enabled for purposes of website accessibility
Free Article Join Over 1 Million Premium Members And Get More In-Depth Stock Guidance and Research
By Daniel Foelber - Dec 3, 2020 at 10:31AM

Investing in value and dividend stocks is one way to prepare for a stock market crash.

One Up on Wall Street by Peter Lynch was published over 30 years ago, but it contains timeless lessons applicable to today's market. Lynch quotes rarely go out of style. "Know what you own and know why you own it." "Behind every stock is a business. Find out what it's doing." There's a reason many investors got their start reading Peter Lynch. I was one of them.

Retired and in his mid-70s, it's unlikely we'll be getting new stock picks from Lynch anytime soon. But we can try our best to imagine what companies he would watch in today's market. Lockheed Martin ( LMT 0.99% ), Kinder Morgan ( KMI -0.89% ), and ConocoPhillips ( COP -0.21% ) would likely get the Peter Lynch stamp of approval. Here's why. 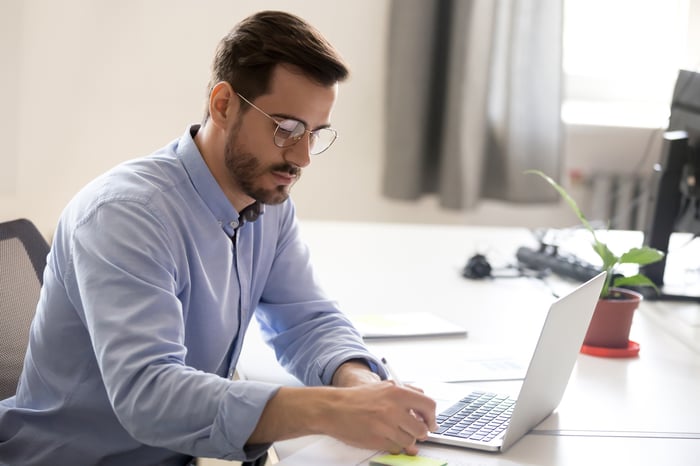 What kind of investor was Peter Lynch?

At his core, Peter Lynch was a value investor that looked for under-the-radar deals. The strategy worked. Between 1977 and 1990, Lynch managed the Magellan Fund at Fidelity Investments. The fund increased its assets under management from $18 million to $14 billion and was the number one performing mutual fund during that time -- averaging a staggering 29.2% annual return.

Lynch was motley. He didn't follow the herd. He didn't care about the hype. He preferred to invest in unknown but easily understandable companies.

What makes Lynch's approach so captivating is that he demystified the complexity of investing in stocks. His investment in La Quinta Motor Inns was something really anyone could have figured out. The motel was charging 30% less than its competitors by eliminating extra amenities like conference rooms, reception rooms, and other things that added square footage without contributing profit. The motels were famously located close to airports -- ideal for business travelers. To Lynch, investing was all about recognizing a good business, finding out if it was a good price, and then benefiting from its success.

Defense contractor Lockheed Martin is a value stock hiding in plain sight. While not as relatable as La Quinta, Lockheed's business is fairly easy to understand. And once you do, it's equally easy to see why the company seems to be a good price now.

History buffs might be familiar with Lockheed Corporation's P-38 Lightning used in World War II. Today, the F-16 and the F-35 are some of the most well-known fighter jets in the world. Lockheed Martin sells its systems, products, and services to the U.S. government and its allies. It's a pretty steady gig considering the U.S. is a reliable customer with an appetite for national security.

The U.S. spends a lot of money on three main things: national security, Medicare and Medicaid, and Social Security. The government's Fiscal Year 2021 began on Oct. 1. It plans on spending $4.875 trillion as follows: 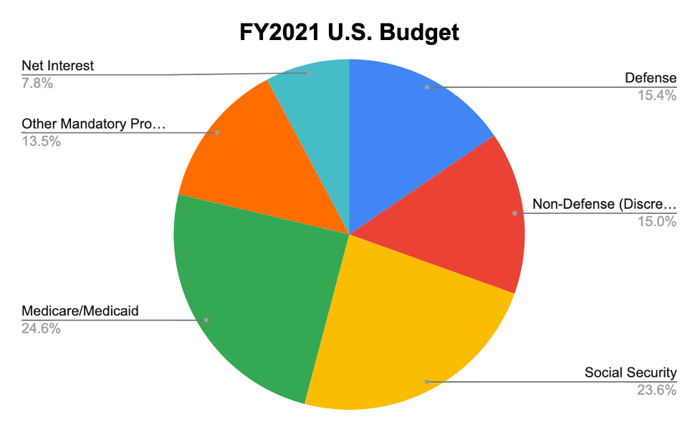 Lockheed Martin is able to justify the research and development of its costly programs based on customers ordering in advance. The amount of business that has already been budgeted is called its backlog. Lockheed currently has a record $150.4 billion backlog, which is enough to last it about two to three years given it expects to earn revenue of $67 billion next year. The company has consistently grown revenue, net income, and operating cash flow over the past 10 years. 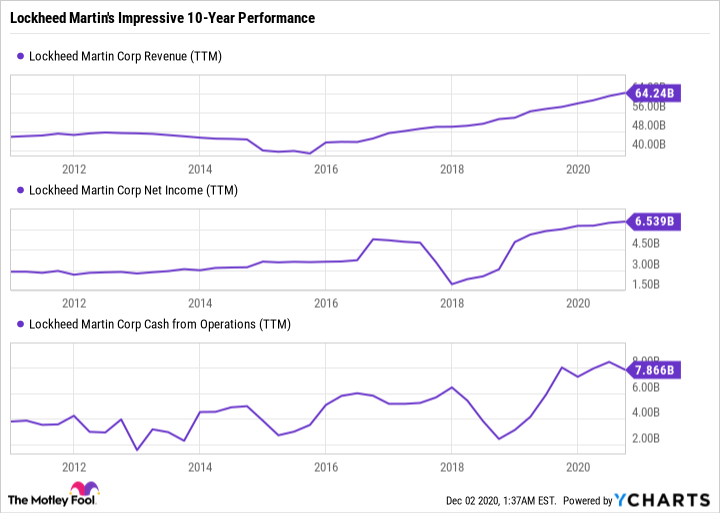 Despite Lockheed's steady revenue and earnings growth, Wall Street has given up on the company. Shares of Lockheed are down 6% compared to the S&P 500's 20% increase over the past six months. Momentum investors wouldn't like this, but Peter Lynch probably would love it. And it doesn't hurt that Lockheed has a 2.8% dividend yield.

Peter Lynch would likely be bargain hunting in one of the least-loved sectors -- oil and gas. Doubts regarding the industry's long-term future, lower commodity prices, a slow economic recovery, and other headwinds have sent many oil and gas stocks down substantially this year.

Specifically, Lynch would probably target the pipeline sector. Known for predictable cash flows that support high dividends, the midstream business (pipelines) has many advantages over the upstream (drilling and producing) and downstream (refining and petrochemical) segments.

There are many attractive pipeline companies, but one that stands out is Kinder Morgan. Kinder Morgan mainly transports natural gas, which hasn't declined as much as oil. Its business is over 62% natural gas, and it's responsible for moving 40% of U.S. natural gas consumption and exports. Natural gas has a bright future in power generation and industrial processes as the U.S. switches from coal.

Kinder Morgan posted solid third quarter earnings, adding to its impressive 2020. The company is earning plenty of extra cash to cover its dividend. It has been able to do that because 68% of its cash flow is take-or-pay, meaning it gets paid no matter how much it transports. Another 30% of its cash flow is fee-based or hedged with futures contracts to ensure the most predicable revenue possible. The company is committed to paying down debt and growing its dividend -- which currently yields 7.3%. With shares down 33%, Peter Lynch may see value from a company with reliable cash flow and an attractive dividend, even if it's in an out of favor industry.

If Peter Lynch was feeling extra ambitious, he may have gone for shares of ConocoPhillips. The company is one of the largest independent exploration and production (E&P) players. Yes, it's in the upstream oil business, arguably the riskiest of the three. But ConocoPhillips has spent years positioning itself to have low production costs and plenty of reserves. And its shares are down 40% for the year. 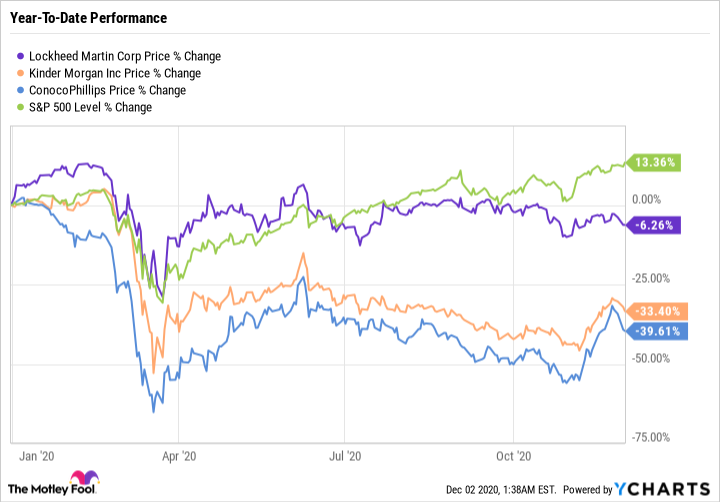 In October, it announced plans to buy one of its competitors, Concho Resources, for what looks to be a favorable price. The deal should further decrease ConocoPhillips' cost of production.

ConocoPhillips has a fairly simple business model: sell its products for more than their production cost. The simplest and easiest way this could happen is if oil and gas prices rise. But that's outside of its control. Within its control, the company can reduce its cost of supply by improving its operations and acquiring resources -- like those from Concho -- for a cheap price.

In late November 2019, ConocoPhillips noted that it doesn't plan on investing in assets with a higher than $40 per barrel WTI cost of supply. With oil prices hovering between $40 and $45 per barrel WTI, that looks to be a wise move. The company now has 23 billion barrels of oil equivalent (boe) with a less than $40 per barrel WTI cost of supply. For context, management expects its average 2020 production to be between 1.12 million to 1.13 million boe per day, meaning it has decades of untapped reserves.

A low cost of supply and plenty of cash on the balance sheet positions ConocoPhillips to operate favorably in the current oil environment -- something few of its competitors could say with confidence. The stock also yields an attractive 4.4%.

Three up on Wall Street

Peter Lynch's grassroots and contrarian approach to investing is something that many Motley Fool readers would likely find familiar.

The market's recent run-up has pole-vaulted the share prices of many Peter Lynch-like stocks. It wouldn't be surprising if he approached the market with patience, targeting a large cash position and waiting for opportunities to come to him.

For what stocks he would buy, it seems Lockheed Martin, Kinder Morgan, and ConocoPhillips fit the bill. All three are underperforming the market, lead their respective industries, and pay sizable dividends.