Please ensure Javascript is enabled for purposes of website accessibility
Free Article Join Over 1 Million Premium Members And Get More In-Depth Stock Guidance and Research
By Harsh Chauhan - Dec 3, 2020 at 8:30AM

An acquisition-driven strategy is delivering the goods for this cybersecurity play.

Palo Alto Networks ( PANW 4.43% ) is one of the top cybersecurity stocks that money can buy. The cybersecurity specialist has built up a consistent record of delivering high growth rates and that consistency showed last month when the company released its fiscal 2021 first-quarter earnings report.

Let's see how Palo Alto's quarterly report (for the three-month period ending Oct. 31) unfolded and what the bigger picture looks like for this tech company.

Palo Alto Networks' revenue jumped 23% year over year to $946 million in the first quarter, easily beating the $921.7 million Wall Street estimate. Adjusted earnings increased from $1.05 per share in the prior-year period to $1.62 per share last quarter, well ahead of the analysts' consensus estimate of $1.33 per share. The better-than-expected performance that Palo Alto turned in isn't surprising as it has been acquiring smaller companies to build a greater presence in the cybersecurity space. In fact, it has spent over $2.4 billion on acquisitions since CEO Nikesh Arora took over in June 2018. The strategy of building a diverse cybersecurity ecosystem is paying off, as the growth in the company's top line over the past couple of years shows us. But Palo Alto Networks still has a lot of room for growth. 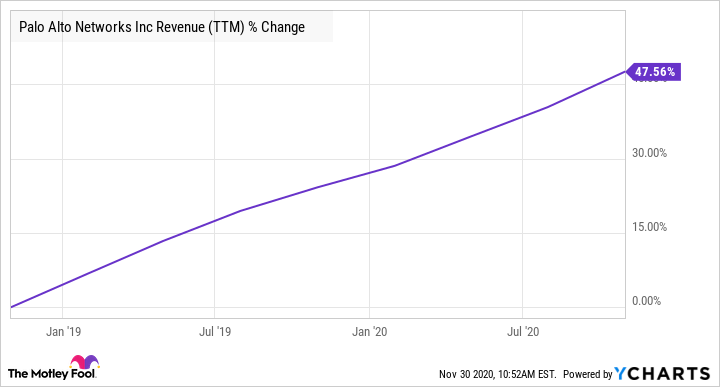 Palo Alto is set up for long-term growth

Palo Alto's acquisition strategy is driving growth in the customer count as well as spending. For instance, 70% of the Fortune 100 companies are now using Palo Alto's Prisma cloud platform, compared to 43% six months ago. In all, Palo Alto added 2,200 new customers during the quarter.

Additionally, Palo Alto customers are spending more money on the company's offerings. The lifetime value of its top 25 customers during the quarter increased 37% year over year. The big jump in this metric bodes well for Palo Alto. That's because the lifetime value is calculated by deducting the costs incurred to acquire and service a customer from the revenue generated from that account.

It won't be surprising to see Palo Alto maintain the impressive growth in this metric as the acquisitions are leading to an increase in cross-selling opportunities. The company's existing customers will get access to additional cybersecurity products, while the new ones coming in via the acquisitions can choose from Palo Alto's existing offerings.

Such synergies are helping Palo Alto quickly build a substantial pile of deferred revenue that's currently greater than the company's trailing-12-month revenue. Its deferred revenue increased 31% year over year last quarter to $3.9 billion, outpacing the growth in the actual revenue. Deferred revenue is the money that's collected by a company in advance for services that will be delivered at a later date, so the impressive jump in this metric bodes well for future top-line growth.

Palo Alto's strong fiscal first-quarter showing also encouraged the company to bump up its full-year guidance. It had been anticipating revenue growth in the high teens this fiscal year, but it now expects to clock more than 20% growth to a range of $4.09 billion to $4.14 billion.

More importantly, the company expects its next-generation security offerings to generate annualized recurring revenue of $1.15 billion in fiscal 2021, up 77% from last year. Palo Alto also expects its adjusted operating margin to increase by 50 basis points this year, and the metric could head higher in the long run as the company gets more of its revenue from recurring sources such as subscriptions.

Not surprisingly, analyst estimates compiled by Yahoo! Finance indicate that Palo Alto could clock strong bottom-line growth rates, both in the short and the long run. Palo Alto Networks is pulling the right strings that could help it sustain its momentum and remain a top cybersecurity play for a long time to come.