No self-respecting astronaut would vault into space without some handsome duds. With that principle firmly in mind, Virgin Galactic (NYSE:SPCE) has unveiled a set of uniforms for the pilots of its space craft, designed in collaboration with the company it grandly calls its "technical spacewear partner," sports apparel specialist Under Armour (NYSE:UA).

The getup, which includes a full spacesuit and footwear, will soon be put through its paces. Virgin Galactic wrote in a press release that on its next test flight, the "window" of which should open this Friday, Dec. 11, chief pilot Dave Mackay and pilot C.J. Sturckow will both be clad in the outfits.

What the company calls spacesuits are really uniforms. The Virgin Galactic pilots will not physically venture outside their craft during the flight and thus not require the bulky protective suits familiar to space exploration aficionados. 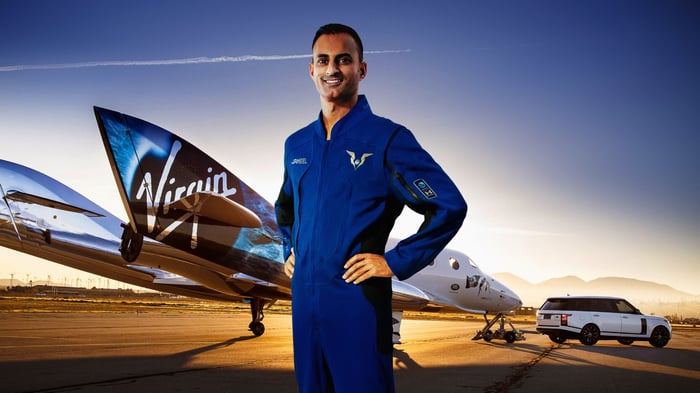 Still, a great deal of consideration involving many factors went into the design of the company's new apparel. Virgin Galactic quoted Under Armour's senior vice president of material and manufacturing innovation Randall Harwood as saying that it was "developed for comfort, support, movement, and temperature management."

"Our goal was to build a suit that leaves a pilot -- like any athlete -- feeling confident and with zero distractions during a critical moment of performance," he added.

Virgin Galactic didn't say as much, but the clothing will also help give the company's most high-profile employees a clean and professional look. As these pilots become better known, images of them in the suits should also serve to strengthen the company's identity and branding.

The upcoming flight is taking place after delays caused by the coronavirus pandemic. It will be conducted exclusively by essential personnel, and carry no guests or observers from the media.