The novel coronavirus pandemic has impacted almost every aspect of our lives. One area that has drastically changed is the education system. For college students, this means choosing whether to go back to campus, take classes remotely, some mix of the two, or, in some cases, even forgoing college altogether.

Private student loan provider SLM Corp. (NASDAQ:SLM), better known as Sallie Mae, is all too familiar with the struggles faced by the educational industry amid the pandemic. The future success of Sallie Mae hinges on student borrowers graduating, getting a job, and making payments on their private loans. It also relies on new students enrolling in colleges and universities on a consistent basis as its primary source of loan origination.

Sallie Mae investors are stuck in limbo as far as valuation is concerned, with the stock sitting at what appears to be an attractive price-to-earnings ratio of 7.4, considering the stable bottom-line earnings performance in recent quarters. Is Sallie Mae a good value buy, or is it a value trap? 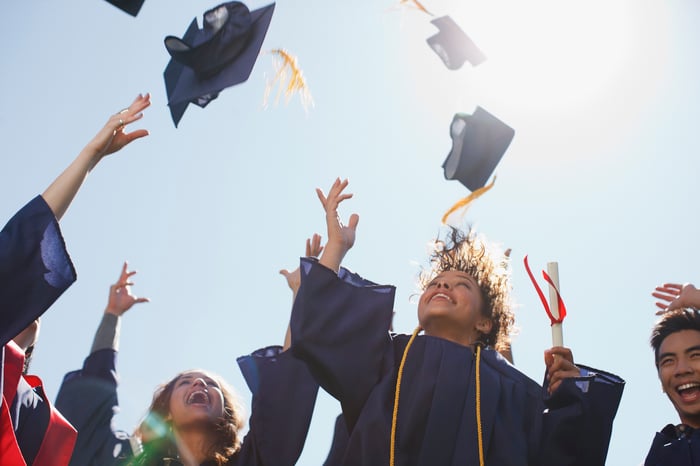 As I said, Sallie Mae relies on two things: graduating students getting jobs and making loan payments, and a continuous flow of new students seeking out new loans.

On the former point, CEO Jon Witter expressed concern during the Sallie Mae's October earnings call that companies could be limiting hiring, but he remains optimistic about recent graduates' employment prospects. He pointed to the usage of non-disaster forbearance, graduated repayment programs, and other assistance programs (which are comparable to previous years) as positive signs for the student lender.

However, he warns the company won't gain more clarity on this front until the end of the current November-to-April period, when the most recent graduate cohort enters repayment. In fact, in November and December alone, $2.4 billion worth of Sallie Mae loans are slated to enter full principal and interest repayment.

On the latter point, enrollment is a concern as well. According to the National Student Clearinghouse Research Center, undergraduate enrollment is down 4.4% compared to last year, and overall postsecondary enrollment is down 3.3%. Not only that, but freshman enrollment is down a whopping 13%, including a decline of 19% at local community colleges. For this reason, Sallie Mae management expects full-year loan originations to decline 6% year over year.

Yet another concern relates to federal student loan borrowers, whom have been on a payment holiday since the CARES Act was passed March. This payment holiday is expected to lapse by the end of the year, barring any stimulus agreement by Congress before then.

Management at Sallie Mae is concerned that a lapse of this federal student loan payment holiday will increase its customers' financial burden, which could leave them unable to make payments on their private loans. According to the company, its borrowers have a monthly federal loan payment of about $400 per month in addition to their $277 per month worth of Sallie Mae loans.

The lender has navigated 2020 skillfully

On a positive note, Sallie Mae's third-quarter forbearance rate was down to 4.3%, compared to 9.3% in the previous quarter, with 97% of customers who initially received COVID-19-related disaster forbearance no longer needing it.

Despite a tough environment, the lender managed to increase net income in the most recent quarter by 33% to $42.6 million. The first nine months of 2020 have also seen net income rise 3%, or $11 million, compared the same period last year. But to get a true idea of how net income grew despite the pandemic, you have to dive deeper into the line-items on the income statement.

While interest has declined, the provision for credit losses during the third quarter declined, by a total of $103.1 million, while operating expenses declining by $26 million. For this reason, the company managed to post net income growth of $42 million compared to the same quarter last year.

In the first nine months of 2020, net income is up $11 million, or 3% compared to the same period last year. This growth was largely thanks to the gain on sale of loans of $238 million in the period, bringing total non-interest income for this period up $277 million, or 526% year over year.

The company continues to stay well-capitalized and maintains strong ratios on its balance sheet. Risk-based capital requirements are minimum capital requirements for financial institutions set by regulators to prevent them from taking on excessive risk. Institutions are considered to be well capitalized when risk-based capital is 10% or higher and their common equity tier 1 ratio (CET1) is 6% or higher. Sallie Mae easily clears those hurdles, with a 13.9% total risk-based capital ratio and a CET1 ratio of 12.7%, putting it on strong financial footing..

Sallie Mae is a value stock worth considering -- with a caveat

Although Sallie Mae has seen net income grow year over year, it's not exactly the type of growth that is sustainable in the long run. In order to draw in more investors and warrant a higher valuation, the company must continue to grow it loan portfolio and related interest income. The lender expects competitors to scale back participation in the student loan industry, which could create future opportunity in a private education loan market that's growing at a pace of 6% annually.

Still, Sallie Mae appears to be a value trap -- primarily due to the fact that there is still such uncertainty about student enrollments, employment prospects, and the lack of clarity of the federal student loan holiday. Investors are best advised to sit on the sidelines until we learn more about the graduating cohort's repayment ability, which should become clear in the first few months of 2021. Positive developments in the job market and in college enrollments by that time could make Sallie Mae a great value buy.

Is Sallie Mae a Good Value or Is It a Value Trap? @themotleyfool #stocks $SLM Next Article
Current