Millions of gamers are pumped to get their hands on a new game console. With the advanced technology in Sony's PlayStation 5 and Microsoft's Xbox Series X/S, players will get to enjoy more realistic gameplay over the next few years, especially with Electronic Arts' (NASDAQ:EA) EA Sports titles.

Every new console generation makes Madden and FIFA look more like the real thing, which creates more immersion and more excitement for players, and growth opportunities for these top sports titles. Here are three reasons why Electronic Arts' stock may outperform during the first year of the next-generation consoles. 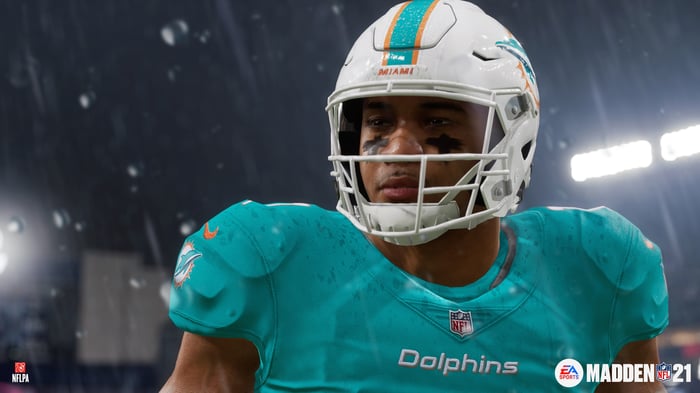 1. New consoles can grow the player base for top games

Our business has grown significantly this year, and we are projecting continued expansion into [fiscal 2022] and beyond.
-- CEO Andrew Wilson, fiscal second-quarter 2021 earnings release

Before launching FIFA 21 at the start of the fiscal third quarter in October, the franchise was already having a record year, with bookings up 26% year over year. Likewise, since launching Madden NFL 21 in August, the best-selling football title has reached 30% more players year over year.

Management is calling for full-year total bookings to increase by 10%, reaching $5.95 billion. This growth is partly driven by in-game spending in Madden and FIFA Ultimate Team, which contributed to live services growth of 15% on a trailing 12-month basis.

EA is releasing a new enhanced version of FIFA 21 and Madden 21 on Dec. 4 for the PlayStation 5 and Xbox Series X, which will make these games even more engaging for players, and CEO Andrew Wilson sees this as an opportunity to grow the audience for these titles.

If you go back and look through history, every console transition meaningfully grows the market, and top-tier frontline sports games almost always drive a lot of that growth and benefit from the growth in player engagement as those console transitions move through and a bigger market buys into the new console generation.
-- Wilson, EA's fiscal second-quarter conference call

With the EA Sports business looking strong, management is thinking big about its long-term roadmap, where it plans to release multiple new sports franchises over time. But in the short term, there are several new releases coming across EA's top franchises to keep the company's momentum up.

For fiscal 2022, EA is planning six new releases, including the next installment in the Battlefield series, which is scheduled to release in time for the holidays in calendar 2021.

Battlefield has always played second fiddle to Activision Blizzard's Call of Duty, but EA's shooter is one of its biggest games. A new Battlefield comes out every few years, and it can draw a big crowd. During the fiscal third-quarter conference call in February 2019, EA disclosed that 27 million players had played a Battlefield game fiscal-year-to-date.

A new improved Battlefield game that takes advantage of the technological majesty of the PS5 and Xbox Series X will surely make for a big seller next year.

The short-term release slate also includes a new Need for Speed game, which has been a top racing title for many years. EA also expects fiscal 2022 to be another strong year for The Sims 4 and the popular battle royale shooter Apex Legends.

3. Apex Legends is a growth catalyst

Apex Legends is a free-to-play battle royale shooter that launched in February 2019 and immediately became one of the most played shooters on the market. Even though it's free-to-play, it's on track to become the next $1 billion franchise in EA's lineup. 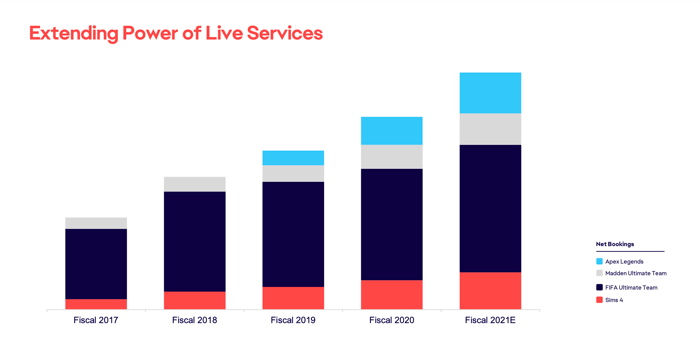 Apex Legends is a significant growth catalyst for EA's live services business. EA has expanded its development team at its Respawn studio in Los Angeles with a new team located in Vancouver to keep up a steady cadence of new content updates for the game.

What's more, EA has a mobile version in the works, which is expected to be complete during fiscal 2022. EA wants to take advantage of the growth opportunity for the game in Japan, which is Apex's second-largest market.

EA's mobile bookings grew 8% year over year on a trailing 12-month basis. At $773 million in bookings, mobile represents 14% of EA's business, but investors should expect mobile to continue growing over time for EA.

In addition to Apex, EA also has plans to make six new soccer games on mobile. This could be a big sales driver for the mobile business, given soccer's growing popularity worldwide.

EA has got plenty in the fire

EA stock has only climbed 22% over the last three years, so it's due to break out of its slump at some point. With the sports titles positioned to attract new players on the next-generation consoles, in addition to a new Battlefield and growth in Apex Legends, this top gaming stock should make a good stocking stuffer.