Shares of several companies associated with lidar sensor technology were trading higher on Monday, on a burst of investor interest following reports of a deal that could take an Israeli lidar maker public.

Here's where things stood for these three stocks as of 1:15 p.m. EST, relative to their closing prices on Friday.

Lidar is a remote sensing technology that uses a pulsed laser beam to measure distances. Conceptually similar to radar, lidar (for "light detection and ranging") has many uses. Among them: Self-driving vehicle systems use lidar to make highly detailed images of the vehicle's surroundings. Those images are then compared with a detailed 3D map to help determine the vehicle's exact position from moment to moment.

The market for lidar sensors is expected to boom in coming years, as driver-assist systems become more advanced, self-driving vehicles come to market, and robots of other kinds become more common. While lidar-related companies haven't yet drawn the same intense interest from auto investors that we've seen with electric-vehicle makers in recent months, that might be starting to change. 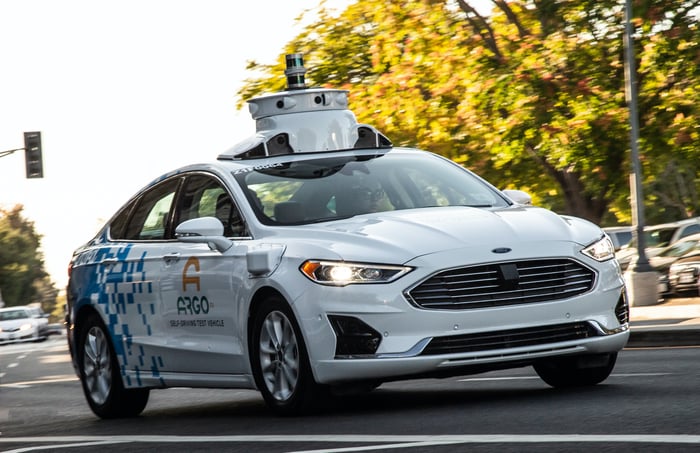 Two of these companies -- Velodyne and Luminar -- went public in 2020 via mergers with special purpose acquisition companies (sometimes called blank check companies or SPACs). The third, Collective Growth, is a SPAC that raised $150 million in April and is reportedly nearing a deal to merge with Israeli lidar maker Innoviz Technologies.

Bloomberg reported last week that Collective Growth is seeking to raise an additional $100 million to $350 million ahead of a merger with Innoviz that would value the combined entity at over $1 billion. The SPAC is led by CEO Bruce Linton, co-founder of cannabis producer Canopy Growth.

Luminar completed its own SPAC merger and joined the public markets last week. The Palo Alto, California-based start-up raised about $590 million in the deal, which it will use to bring its own lidar units -- designed specifically for self-driving vehicles -- to market. The company's founder and CEO, Austin Russell, left college (Stanford University) to found Luminar after receiving a $100,000 Thiel Fellowship in 2012.

To the extent that there's an established incumbent in the lidar sensor space, it's Velodyne, which went public via its own SPAC deal in September. Velodyne has deep ties to the auto industry (Ford Motor Company is an investor), and its distinctive "hockey puck" sensors can be seen on many prototype self-driving vehicles.

Why are these three stocks up today? I think it's because last week's developments renewed investors' interest in lidar technology.

Nearly all self-driving research efforts consider lidar sensors to be must-haves. For the last several years, the challenge has been that the best available units -- Velodyne's -- were expensive, costing tens of thousands of dollars each.

That cost has been seen as a barrier to wide adoption of self-driving technology. While Velodyne has managed to lower the cost of its sensors significantly over the last couple of years, the space is ripe for an entrant that can offer a truly low-cost solution that has the durability necessary for automotive use.

That's what Luminar and Innoviz are trying to bring to market, while Velodyne continues to work on its own lower-cost solutions. The race is on -- and while the risks for investors in any of these companies are significant, the payoff could be substantial.