Please ensure Javascript is enabled for purposes of website accessibility
Free Article Join Over 1 Million Premium Members And Get More In-Depth Stock Guidance and Research
By Rich Smith - Dec 7, 2020 at 11:55AM

Space tourism stock Virgin Galactic ( SPCE -7.12% ) got a lift on Monday, rising 6.2% through 10:50 a.m. EST after the company tweeted, on Sunday, that it has "mated" its VSS Unity spaceplane to the VMS Eve mothership "as preparations continue for our first spaceflight from Spaceport America, New Mexico."

The company has not announced a new date for its next planned space test flight, but even so, investors are taking the announcement as good news. 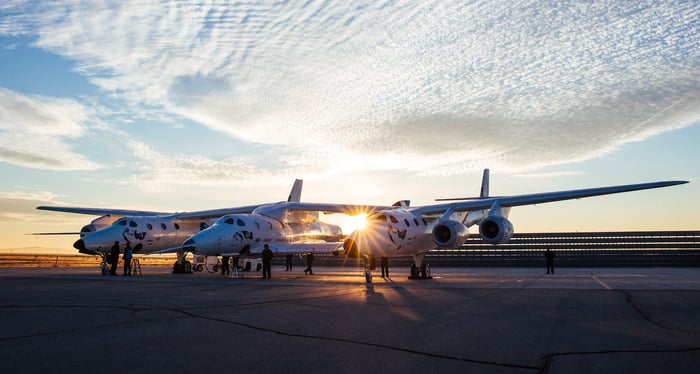 And it may be good news -- especially when viewed in the context of other good news coming out of New Mexico over the weekend. On Saturday and Sunday, New Mexico reported successive days of declining coronavirus infections -- 1,925 and 1,250 cases, respectively -- reversing a modest increase toward the end of last week.

Why is this important? On Nov. 27, the state of New Mexico announced that a new "tiered Red to Green" system for sequestering businesses against the coronavirus county by county would replace its previous blanket health order forbidding "non-essential activities" in the state.

Sierra County, New Mexico, where Spaceport America is located, is currently one of the vast majority of New Mexico counties colored red. This means that, through at least Dec. 16, Sierra County (and Virgin Galactic) will be considered "very high risk." And that means that Virgin Galactic may "operate ... but with limited capacity and reduced operations, owing to the very high risk of viral spread."

Virgin Galactic's Sunday tweet notwithstanding, this means that for the next nine days at least, the company will not be able to make much progress toward preparing for its next test flight. That being said, the more the coronavirus numbers go down between now and Dec. 16 (New Mexico plans to update its map "every other Wednesday," starting from Dec. 2), the greater the chances that Sierra County will turn yellow or even green later this month, permitting a resumption of space operations.

If I were to make a prediction on what this means for the stock, I would guess the lower the coronavirus infection numbers go, the higher Virgin Galactic's stock price will go over the next nine days.