Please ensure Javascript is enabled for purposes of website accessibility
Free Article Join Over 1 Million Premium Members And Get More In-Depth Stock Guidance and Research
By Rich Duprey - Dec 8, 2020 at 6:41AM

The matchup is more than just about who's got the better burger.

The Burger Wars between McDonald's ( MCD 2.04% ) and Burger King still rage as they have for decades, but the fast-food rivalry is no longer a straight-up matchup.

Burger King parent Restaurant Brands International ( QSR 3.35% ) also owns the Tim Hortons coffeehouse chain and Popeyes Louisiana Kitchen. That diverse product line means investors who want to know which stock is the better buy need to pull back their lens a little further to look at more than just burgers. Here's one take on which quick-serve stock is the best for your portfolio. 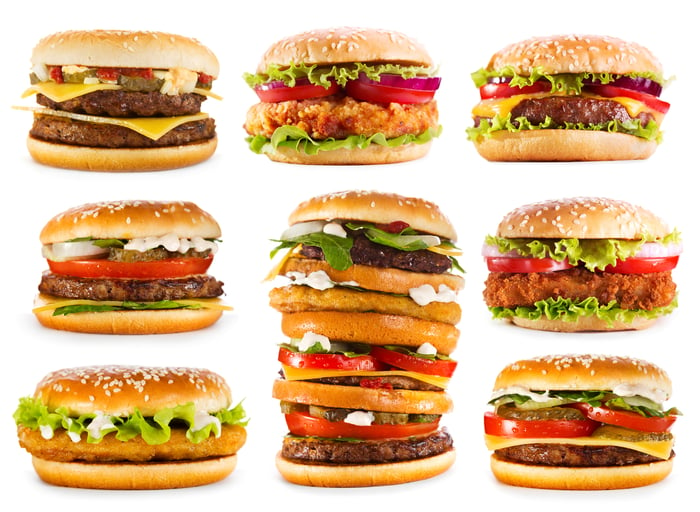 With over 39,000 restaurants around the globe, McDonald's is by far the biggest restaurant operator, and when it was just competing against Burger King, there wasn't much of a contest. At the end of the third quarter, its main competitor had just under 18,700 restaurants.

While McDonald's still has far more restaurants than Restaurant Brands International, the addition of Tim Hortons and Popeyes means the lead has been narrowed. There are more than 4,900 coffeehouses and 3,400 chicken chains, bringing the restaurant operator's total to just over 27,000 locations worldwide.

Even so, although McDonald's is only 30% larger than its rival, it generates nearly four times as much in sales as does Restaurant Brands International. McDonald's has $19.2 billion in trailing 12-month sales, compared to just $5.1 billion for all three concepts under Restaurant Brands' umbrella.

While McDonald's benefits from its global footprint, it turns out there really isn't that much difference when it comes to making a profit in fast food. The costs of building a restaurant and maintaining its operations have become pretty standardized, so there's not much advantage when it comes to running a burger shop, a coffeehouse, or a chicken joint.

While there is a certain level of parity, though McDonald's comes out ahead on the bottom line, McDonald's profitability has been increasing over the past five years or so across the board, while Restaurant Brands International has seen its margins steadily erode over time.

There's no single metric an investor can (or should) point to in making an investment decision, but by looking at a number of them you can get a sense of where a stock stands in the scheme of things, particularly when paired up against a rival.

While the two restaurant operators start off fairly even, things quickly tilt in Restaurant Brands International's favor, and do so decidedly. Particularly on a price-to-free cash flow basis, where the Burger King owner is discounted by half compared to its rival -- even if Restaurant Brands isn't exactly a bargain-basement stock -- it shows McDonald's is being priced at premium levels.

It should also be noted that neither chain is doing particularly well when it comes to dividends and their payout ratio. McDonald's is paying out 28% more in dividends than it's generating in free cash flow, which is an unsustainable rate, while Restaurant Brands really doesn't give itself much leeway to grow its own dividend.

While McDonald's won two of the three sections, I think the latter section should be weighted more heavily, and it goes in Restaurant Brands' favor.

Moreover, momentum also seems to be leaning in its direction because of the massive popularity of its spicy chicken sandwich. The chain is posting solid comparable sales growth, even during the depths of the pandemic where most other chains are showing declines. However, that's offset by the poor performance of Tim Hortons, which it has struggled to turn around.

McDonald's will finally have its own answer to the chicken sandwich next year, but for an investor choosing between the two chains, I think the weight of the evidence lands in Restaurant Brands International's court.