Warren Buffett knows a thing or two about picking the best companies to invest in, and dental braces sound like they're right up his alley. After all, as long as people laugh, they'll want to have a perfect smile. And it's not like there's going to be any major disruption to the orthodontics industry, right?

Enter Align Technology (NASDAQ:ALGN), the company that is looking to replace uncomfortable dental braces with its Invisalign teeth straighteners. Over the last 20 years, Align has sold its straighteners to both kids and adults, making incremental improvements to its core technology along the way while largely maintaining the same successful business model. But does it have a sustainable competitive advantage that would attract a traditional value investor like Buffett? 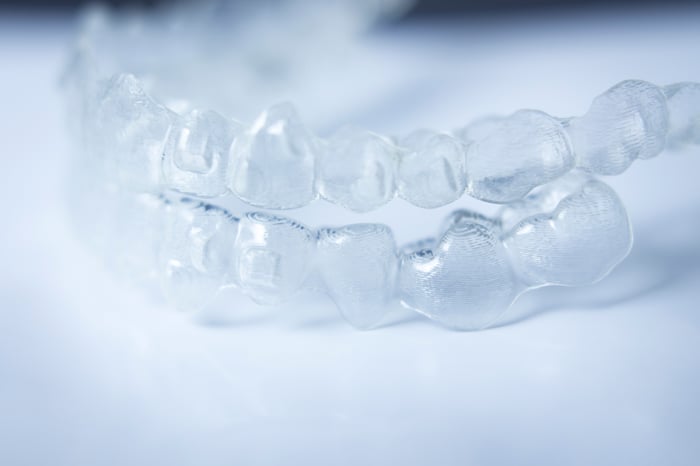 The strength of Align's flagship Invisalign brand of teeth straighteners would likely appeal to Buffett. Strong brands build loyal customer bases, and in some cases they behave as a moat that protects revenue from competitors, so it's something investors should be on the lookout for in general.

Invisalign isn't exactly a household name, but it may be faintly familiar to you, especially if you're a parent -- or an dental clinician. Thanks to decades of outreach, many dentists can be trained to install Invisalign systems while they're still in dental school, meaning that the company has a chance to cement champions of the product who are early in their careers. Last quarter, the company trained more than 6,500 new clinicians to use its product, and shipped Invisalign systems to more than 70,000 clinicians worldwide.

More importantly, the brand is backed by an efficient business. In terms of its operating performance, it routinely reports a profit margin in excess of 70%. This is great in Buffett's eyes, because businesses with fat profit margins tend to have little immediate competition. Plus, they have more room to spend on creating or maintaining a technological advantage. These businesses are also more likely to weather unexpected economic conditions without facing unprofitability. Align also has a minimal debt load of only $86.19 million, enabling it to spend much of its revenue elsewhere.

Even with the sharply negative effects of the pandemic, its most recent quarterly revenue grew faster than 20% year over year to reach $734.1 million in the third quarter. $113.4 million of this revenue comes from sales and maintenance contracts for dental imaging systems, meaning that it's recurring. Recurring revenue is favorable because it's sticky, and doesn't require much additional spending to maintain.

Buffett probably wouldn't appreciate the company's habitual need to spend on research and development (R&D), even though such expenditures only amounted to 6.5% of its revenue in 2019. It's hard to see how it could cut down on this spending while still advancing its product's technology. Nor would he like Align's capital expenditures, which vary significantly from quarter to quarter. Some capital expenditure is necessary, but Buffett's preference is for highly predictable and minimal spending.

Buffett might also be leery about its rapidly rising operating expenses, which rose 15% year over year in the most recent quarter. And, while it isn't necessarily a huge red flag, free cash flows have contracted slightly over the last year.

Most of all, he'd zoom in on Align's perpetually high selling, general, and administrative (SG&A) expenses. Last year, 44.5% of revenue went to SG&A, and 2018's sum was very similar. This includes everything from the cost of labor to spending on marketing -- and it's that last item that is the company's lifeblood. Without its sophisticated digital marketing campaigns targeting teens, their parents, and adults seeking to straighten their teeth, sales revenue would probably drop sharply. The Invisalign brand simply isn't strong enough yet to drive the success of the entire business without additional investments in marketing.

Finally, I anticipate that Buffett wouldn't like much about the teeth straightener market itself. Invisalign costs around $5,000 for a twelve-month course of treatment, which is pricey for many consumers. So, while competition may not have been a major factor in the market for quite some time, there's plenty of room for new entrants to offer a low-cost alternative. As a result, Align is already starting to face growing competition for market share, with around a dozen smaller competitors offering broadly comparable products. Many of these competitors, like SmileDirectClub, entered the market in the last six years. Down the line, it's all but guaranteed that profit margins will start to contract as the battle heats up.

My take on Buffett's verdict

Despite its virtues, Buffett would probably pass on Align Technology. Its heavy reliance on marketing spending and the rising level of competition in its industry point to falling profit margins in the long term. And despite its marketing efforts, the company's brand isn't yet strong enough to defend against competitors that may be able to undercut its prices. As long as people care about straight and healthy teeth, Align will have to fend off competitors.