Due to drastic measures being taken to stop the spread of the coronavirus, people around the world have had far less social interaction this year, which can exacerbate loneliness. On top of isolation, many people have experienced fear, financial strains, job loss, and loss of loved ones. Major depressive disorder (MDD) affects 17 million people in the U.S. alone, and symptoms of depression have been reported more than three times as frequently during the pandemic than before.

Two drug companies that have made brain science their mission -- Biogen (NASDAQ:BIIB) and Sage Therapeutics (NASDAQ:SAGE) -- announced on Nov. 27 that they've teamed up to advance a potential treatment for depression. For Sage, it's gaining an influx of cash and an experienced partner in bringing neurology drugs to market. For Biogen, a company whose stock is down 17% year to date, it may be a shot in the dark to try and find growth and optimism anywhere it can. 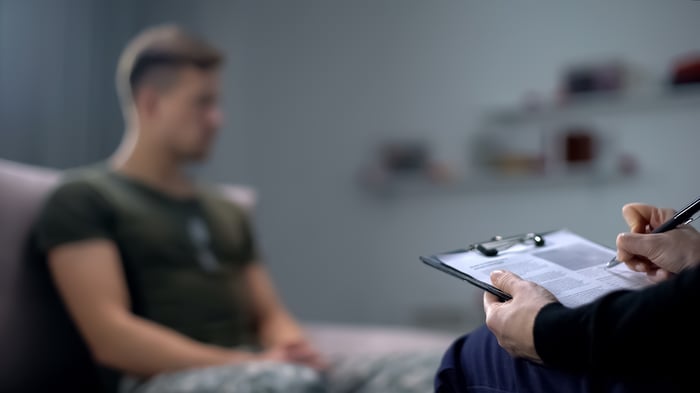 What's the motivation for the deal?

Despite generating more than $14 billion per year in revenue, Biogen is more widely known for a drug that hasn't been approved. The company's experimental treatment for Alzheimer's disease, aducanumab, has gone from being the long-hoped-for weapon against Alzheimer's, to a failed drug candidate, and back again. In the latest round, an independent advisory council recommended against the Food and Drug Administration (FDA) approving aducanumab. The FDA's final decision will come in March 2021.

Biogen does have several neurology-focused blockbuster drugs on the market including treatments for Multiple Sclerosis and Spinal Muscular Atrophy. But despite a history of sustained growth, management forecasts this year's sales dropping for the first time in a decade -- and generic competition, not COVID-19, is the culprit. That was the backdrop when the company announced a $1.53 billion stake in Sage Therapeutics, a developer of drugs for the nervous system and brain. 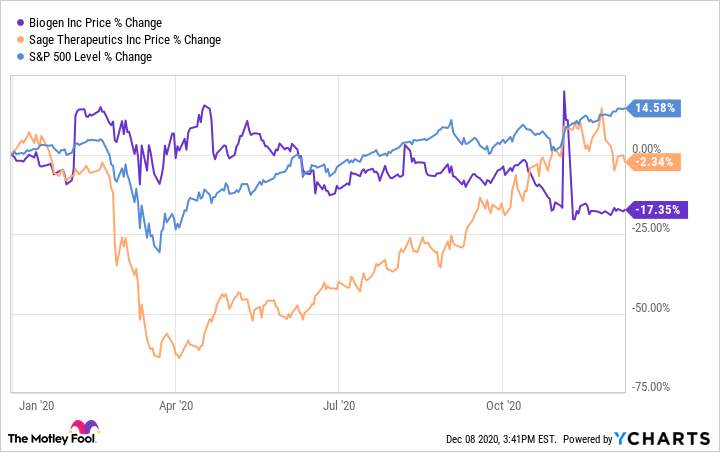 What's Biogen getting out of it?

The partnership involves Biogen offering cash and getting equity in Sage to jointly develop SAGE-324 and zuranolone. Zuranolone is being developed to help people with MDD and postpartum depression and SAGE-324 is under investigation to treat essential tremor -- rhythmic shaking caused by a disorder of the nervous system.

There are currently several phase 3 studies with zuranolone, a rapid-acting treatment for MDD. This differentiates the drug from other treatments that take weeks to have an effect. The drug failed a key study last year but Sage is betting that higher doses in the ongoing trials will show promise. The company's market cap is slightly less than half of the $8 billion it stood at prior to the failed study. With a 2022 launch, analysts expect $1.3 billion in sales in 2026. SAGE-324 is in phase 2, and commercial potential hasn't been widely discussed. Essential tremor affected 6.2 million people in 2018 and the number is expected to grow by another million by 2030. Management expects a readout on SAGE-324 later this month or in the first quarter of 2021.

What could it mean?

It's not obvious whether Biogen took a stake in Sage because management is interested in moving further into psychiatry, because it thinks Sage is a bargain compared to last year, or because it's interested in testing the two drugs in new areas.

If management plans to move further into psychiatry, it would be the first such move since it acquired a schizophrenia drug from Pfizer in 2018 for $75 million. The timing of the deal before the phase 3 readouts is curious. Biogen could be buying rights to a drug Sage suspects is unlikely to succeed. If Biogen expects its stake to lead to advances in areas more related to neuroscience it would be odd. The company just completed a $1 billion investment in Denali in August to co-develop potential treatments for Alzheimer's and Parkinson's disease.

Biogen doesn't have much presence in the psychiatry space, it recently did a deal with another small biotech in its core area, and it took a stake in a company with every reason to wait until it had more leverage if it expected success. Prior to the deal, Sage had about $1 billion in cash, which would have lasted two years at its current rate of expenses. So why now?

I'm inclined to think Sage doesn't believe zuranalone will succeed, and Biogen wants to help save the drug candidate. Management of both companies are saying the right things, but questions persist. Given recent developments around aducanumab, I think either Biogen felt pressure to make a deal that would deliver some positive news, or it has a lot more planned for SAGE-324 than many anticipate. Given its declining revenue and high-profile regulatory flop, I'll be avoiding shares until the strategy is more clear.