Please ensure Javascript is enabled for purposes of website accessibility
Free Article Join Over 1 Million Premium Members And Get More In-Depth Stock Guidance and Research
By Will Healy - Dec 9, 2020 at 10:12AM

Without a doubt, Starbucks ( SBUX 0.04% ) stock has brewed quite the caffeine high, particularly for early investors. The stock debuted at $17 per share in 1992. Adjusted for six two-for-one stock splits, that amounts to $0.266 per share. Given that the dividend alone is now $1.80 per share annually, these longtime investors enjoy a continuous buzz.

However, the question now is: Can an investment in this consumer discretionary stock continue to brew gains for new investors? Let's take a closer look at where Starbucks stock may go over the next five years.

Starbucks' focus will remain outside the U.S.

One of the most significant changes in Starbucks in recent years has involved an increased international focus.

To the surprise of few, this has happened because most of the untapped potential for cafes lies outside of the United States. As of the end of the last quarter, more than 15,000 of Starbucks' 32,660 stores were in the U.S.

People may exaggerate a bit when they say that there is a "Starbucks on every corner." However, that indicates that few parts of the U.S. lack a Starbucks. It also partially explains why the company expects only 50 net store additions for the Americas in the coming fiscal year. 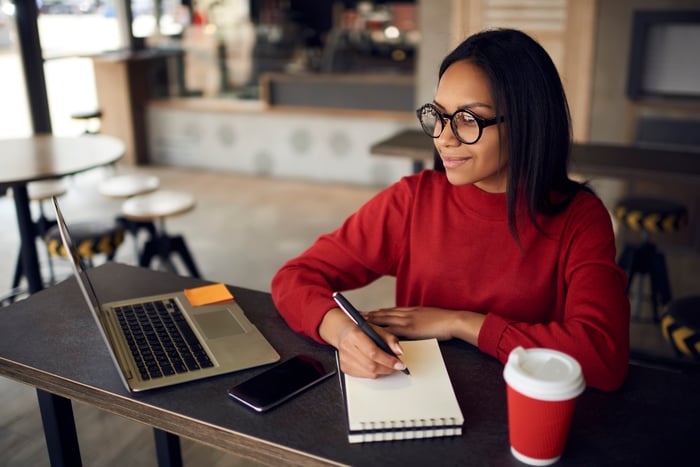 However, part of this change involves closing more locations in urban areas. Starbucks will also alter store footprints to better accommodate pickup and delivery. The company hopes to increase profits in these areas through this approach. It will also add drive-thrus in more of its suburban and semi-rural locations.

For 2021, the company plans to add about 1,050 net store additions outside of the Americas over the same period. Notable, more than half of those additions, about 600, will be in China alone.

Starbucks needs a large, mostly untapped market to attract growth, and China fits that description. Still, this market of 1.4 billion people has long expressed a preference for tea. Also, it has had to compete with Luckin Coffee for this market.

But all that may change. Luckin is now reeling from an accounting scandal. While that could wipe out Luckin, a comeback is not entirely out of the question. For now, though, the scandal presents an opportunity for Starbucks to at least gain a competitive advantage.

Given Starbucks' history of constant expansion, one should expect its store count to rise continuously for the next five years. This should drive revenue and profit growth, which could boost the stock price.

Indeed, Starbucks trades at a trailing price-to-earnings (P/E) ratio of almost 130. This is well above the average multiple of about 33 over the last five years.

The rising multiple is in large part explained by falling earnings amid the pandemic. For fiscal 2020, consolidated net revenues fell by more than 11%. This led to a drop in net income of almost 59% to $1.17 non-GAAP earnings per share.

Nonetheless, investors have good reason to see this pullback as temporary. The company does not make profit projections five years into the future. Still, for fiscal 2021, it predicts non-GAAP EPS of between $2.70 and $2.90. This would take earnings just shy of the $2.92 per share in non-GAAP earnings in fiscal 2019.

With its steady pace of new store openings and the financial recovery from the COVID-19 pandemic, Starbucks stock should trade at a higher level five years from now. The question that should concern investors is the extent of the growth.

Given the relative saturation in the U.S., the focus will likely remain on China over the next five years. However, the company's growth in China depends heavily on its competitive battle with Luckin. For all of its problems, it remains in business. If it successfully moves on from the accounting scandal, Luckin could begin again to claim market share.

Moreover, investors who buy now will pay a much higher multiple than the historical average. This could become problematic if the pandemic lasts longer than anticipated. Furthermore, investors will have to tolerate some short-term pain as it reconfigures stores in the U.S. to boost its long-term profitability.

Hence, the question is not whether Starbucks stock will trade higher, but whether it will outperform the S&P 500. Given the high valuation and the company's challenges, investors should probably expect average rather than exceptional gains.

Will Either of These Delivery Stocks Turn Profitable Anytime Soon?